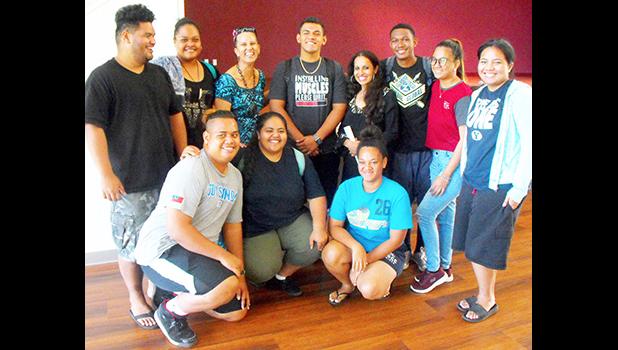 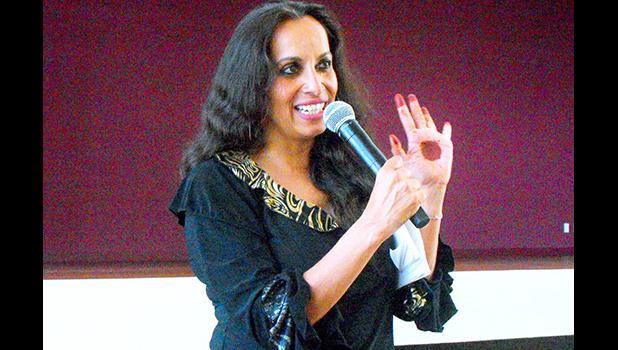 The ASCC Fine Arts Department sponsored the event, which took place in the Multi-Purpose Center auditorium. Coelho, a writer, director and filmmaker originally from India and now based in New Mexico, works in a variety of genres, from documentary making to prose fiction, theatre to poetry.

She has written about and traveled in India, Mexico, Palestine, among other destinations. Her awards include a Fiction Fellowship from the New York Foundation for the Arts, a Jerome Foundation Emerging Artist's Fellowship, and a Fulbright grant to visit Mongolia to experience and record life in nomadic communities.

Coelho showcased her connection to diverse cultures by performing a 20-minute excerpt from her play-in-progress titled “The Good Manners of Colonized Subjects.” The one-woman play is partially memoir, reflecting the author’s search for a decolonized mindset of her own, and also incorporates historical knowledge such as the little-known settlement in India by the Portuguese prior to the British (which ultimately explains Coelho being an ethnic Indian with a Portuguese last name).

While speaking her narrative in the form of poetry, Coelho performed a highly stylized mixture of Indian and Spanish choreography, giving many in the ASCC audience their first exposure to dance styles like flamenco combined with performance elements from Sanskrit classical theater.

The sheer intensity of Coelho’s interweaving of dance and poetry left the audience spellbound, though they quickly composed themselves at the conclusion of the piece to engage in a lively question-and-answer exchange with the author.

“It was wonderful receiving the enthusiastic and insightful comments from ASCC students,” said Coelho of the feedback she received. She added that she always hopes her performances will inspire audiences to discover and utilize their own creativity.  “I've worked in many different genres and I like that sense of the hybrid,” she observed. “I believe in following what calls to you, in creating art that feels true, in telling the story only you can tell, and I facilitate workshops and encounters to help others tell their stories. One core idea behind all my work is: may my story inspire your stories.”

Coelho visited American Samoa to participate in last month’s Tausi Feagaiga (Covenant Keeper) project to train care givers for the elderly, made possible through a collaboration between the Pacific Youth and Community Development, the Catholic Diocese Samoa-Hope House, and the University of Hawaii, with funding by the US Department of Health & Human Services Administration for Native Americans.

The author joined a team of visiting specialists who presented sessions on how the participants can care for their loved ones at home. “My part during the training was to facilitate a creativity and self expression workshop where participants wrote and performed short prose and poetry pieces,” explained Coelho “There's a certain kind of alchemy in metaphor that I feel brings healing and helps people to listen to the voice that guides us into the stories only we can tell. It was incredibly moving to see what the participants created, and seeing creativity rise so quickly to the surface and find its form in word or song or dance. It brings a sense of joy and liberation to those who are creating.”

Prior to arriving in the Territory, Coelho had contacted Dr. Mary Lauagaia M. Taufetee of the American Samoan Arts Council about the possibility of performing excerpts from her solo play-in-progress. “When I'm developing new work, I like to present it to different audiences because it's very useful to hear their reactions,” explained Coelho. Mary put me in touch with Regina Meredith-Fitiao and Kuki Tuiasosopo of the ASCC Fine Arts Department, and that's how the performance at ASCC came about.”

Having traveled extensively and interacted with different world cultures, Coelho noticed connections between the people of Samoa and Mongolia where, she says, “I spent a year and a half with nomadic communities and in the city of Ulaanbataar. Even thought Mongolia is landlocked and Samoa is surrounded by sea, what struck me was how, in both cultures, the landscape is within the body, within the culture, and is like family. Also, they are both cultures that enjoy raising voices in song! Every time I sang or tried to sing ‘Sa vali vali means go for a walk ....,’ I was reminded of a song in Mongolia about birds migrating and love returning called ‘Aynii Shuvuu.’ It's a very popular song for visitors to learn and share.” (Interested readers may hear this song at: https://youtu.be/LThEtnr7CQ0)

Coelho expressed a strong interest in someday returning to American Samoa for further performances and cultural sharing. In the meantime, anyone interested can follow her adventures at  www.shebanacoelho.com