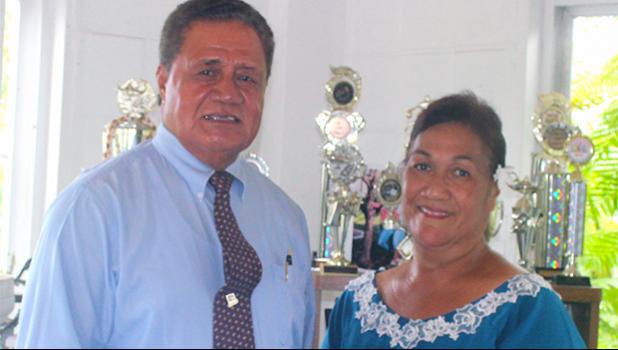 However, his running mate is yet to be named
By
Fili Sagapolutele
fili@samoanews.com

Pago Pago, AMERICAN SAMOA — Sen. Nuanuaolefeagaiga Saoluaga T. Nua has confirmed his candidacy for governor in the 2020 gubernatorial race, while a running mate for the lieutenant governor post will be announced in the near future.

The Manu’a senator made the official announcement yesterday during a joint Samoa News/ KHJ News interview at his home in Tafuna, in the presence of his wife, Usuimalo T. Ah Soon Nua.

Reading from a prepared speech in Samoan, Nuanuaolefeagaiga said that on behalf of himself and his wife, he is happy and humbled to announce his candidacy for governor.

When asked why he had chosen to make the early announcement, Nuanuaolefeagaiga said there are many reasons. One of them, he said, is that following the 2016 gubernatorial election, names of possible candidates for 2020 started to circulate in the community. He said  it appears that campaigning started already.

He identified the other possible candidates as the Senate President and the Lieutenant Governor. He said there was no mention of his name, but he too was looking at the gubernatorial race. Therefore, he decided to make the official announcement early, to avoid the  “guessing” of who the third possible candidate will be.

When asked if there were many possible choices as a running mate to choose from, he said he has a special committee working with him to select a possible running mate. Among the possibilities are Sen. Fai’ivae Iuli Godinet — who was his first choice — but there was no solid response from the Leone senator, Nuanuaolefeagaiga pointed out.

He however claimed that Fai'ivae is "with" the Senate President but he didn't elaborate.

Others identified by Nuanuaolefeagaiga as possible running mates are Taotasi Archie Soliai, Tapumanaia Galu Satele Jr., and Ken Kuaea. The senator didn’t give a timeframe of when the running mate announcement will be made.

In making his decision to seek the governor’s post, Nuanuaolefeagaiga said he was encouraged to run following support and recommendations offered by residents of Tutuila and Manu’a, as well as elders, church leaders, family members, friends and those he and his wife know.

He said he believes it's appropriate for a leader to fight for American Samoa’s daily needs and especially the safety of air and ocean transportation, improvement of a healthy environment of schools, water, and the economy.

Nuanuaolefeagaiga declared that he is perfect for the governor’s job, because he has done great work for his Manu’a District.

He said one of his plans — if it's the wish of the people to elect him governor — is to maintain the priority of offering to the public a solid leadership in a calm manner to respond to differences and challenges faced by the government.

The candidate referred to the current situation regarding differences in interpretation of federal law over the construction of the new Fono building, as well as long-term debts of about $200 million in ASG bonds — which were issued in 2015, 2016 and last year.

“We have come a long way, but there is still more to be done for a solid and better development for the local economy,” he said.

Nuanuaolefeagaiga “humbly” requests support for his quest for  governor, “so we can prepare a better territory for our future generations to live in.”

He has served in both the Senate and House for many years, representing Manu’a. During his tenure in the House he also served as House Speaker, at which time he pushed for the establishment of the US Job Corps program in American samoa.

He is not new to the gubernatorial race. In the 2008 general election, he was the running mate for then candidate for governor, the late Utu Abe Malae.

Since early last year there was a lot of “whispers” in the community of possible candidates for the governor’s race and Nuanuaolefeagaiga’s name surfaced late last year, as his special group was working to firm up a running mate.

In accordance with local law and the Constitution, Gov. Lolo Matalasi Moliga is barred from seeking a third-term as governor.