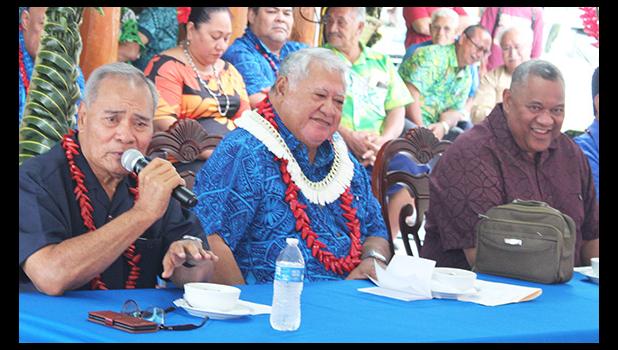 Pago Pago, AMERICAN SAMOA — Gov. Lolo Matalasi Moliga told cabinet members that monetary contributions made during the Manu Samoa fundraising event last week in the territory “reflects our investments in the future prosperity of our territory, and the sustainability of our quality of life improvement campaign.”

Lolo made the statement in his July 29th memo to Secretary of Samoan Affairs and district governors as well as cabinet members, expressing “gratitude and gratefulness” for their support of the Manu Samoa fundraiser last Thursday at Su’igaula o le Atuvasa Beach Park in Utulei.

As previously reported by Samoa News, the fundraising initiative was organized by the Governor’s Office following a request from Samoa Prime Minister Tuilaepa Sailele Malielegaoi, who is also chairman of the Samoa Rugby Union.

Just over $150,000 was raised, with $100,000 from ASG while cabinet members made donations through two separate wheelbarrow drives at Su’igaula Park. There were also donations from the public. (See yesterday’s edition on the breakdown of the financial report.)

In the July 29th memo, Lolo said he and Lt. Gov. Lemanu Palepoi Sialega Mauga “would be grossly negligent if we fail to express to you all our deep sense of gratitude and gratefulness for the public demonstration of solidarity and unity projected by your gracious presence and selfless monetary donations which deeply impacted Prime Minister Tuilaepa and his delegation who were here seeking our financial help” for the Manu Samoa.

“Whatever your personal irritations or annoyance consequential to our commitment to help might have been,” Lolo said he is thankful that cabinet members “transcended these personal vexations for the good of our administration and the image of our government.”

“As leaders we look at the big picture and we eye the future to determine actions we must take,” he wrote. “The donations and monetary contributions we made reflect our investments in the future prosperity of our territory and the sustainability of our quality of life improvement campaign.”

Samoa News notes that the majority of complaints — mostly voiced through social media — were not towards Manu Samoa, but towards the Administration, for giving such a large amount of money when there are other “urgent priorities” in the territory, such as improvements to roads, schools, and healthcare.

The amount given to the territory’s national Pacific Games 2019 Team was also noted as ‘miniscule’ compared to the Manu Samoa donation by ASG.

“I have no misgivings as well as the criticism generated by our community, but we, as leaders, must do the necessary to ensure that our plans and strategies, and plans or the development of our territory are advanced,” he said in the memo.

According to the governor, he and Lemanu are grateful and “indebted” to cabinet members for their “continued support and commitment to forge the successful implementation of plans dedicated to improve the lives of our people.”

“Lemanu and I’s prayers is for our Heavenly Father to reimburse you double fold not only monetarily but more importantly good health so we can continue our collective commitment to serve our people with the best of our abilities,” the governor wrote, and also thanked his Chief of Staff and deputy chief of staff as well as the Governor’s Office staff for ensuring that plans for the fundraising went smoothly.