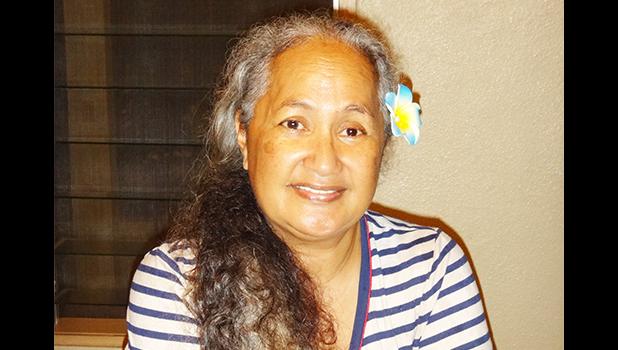 Local environmentalist Andra Samoa is one of the seventy “Inspiring Pacific Women” recognized and profiled by the regional Pacific Community, formerly known as the South Pacific Community, or SPC, which is celebrating its 70th anniversary later this year.

“I'm deeply honored and humbled to be in the presence of many distinguished and inspiring women throughout the Pacific Region,” said Samoa yesterday responding to Samoa News inquiries.

She was nominated by colleagues at the University of Hawaii, Manoa, “who have tolerated my passion — although too aggressive — to develop programs that will build local capacity not only for American Samoa but also throughout the Pacific Region,” Samoa said.

The resulting profiles highlight Pacific women who have made a significant contribution to the social, economic, cultural, and political development in Pacific islands countries and territories.

SPC started publishing on July 24th, and everyday thereafter for 70 days, a new profile of an inspiring Pacific woman to mark its 70th anniversary, and to lead up to the 13th Triennial Conference of Pacific Women and 6th Meeting of Ministers for Women in Suva, Fiji later this year on Oct. 2-5.

For Andra Samoa, her profile was published late last week.

The SPC describes her as a local environmentalist, who walks the talk. “You will always find her cleaning the wetlands or picking up trash along the road and beaches in Leone,” said her friend and colleague Ginger Porter of the Pacific International Training Desk in Hawai’i, according to the profile.

Samoa, who served as the American Samoa Power Authority’s executive director from 2006 to 2013, is currently Chief Executive Officer of the Pacific eCommerce Development Corporation, which works on information technology projects — both application and infrastructure — that support economic development, disaster preparedness, health and education in American Samoa.

“Like so many of these role models selected by SPC, gender does not limit or hinder our passion to enable others to excel in life,” Samoa said. “For me, this passion can only be contributed to the values and principles formed in the confines of a village, parents, church, extended family, missionaries, nuns, and priests; and with education you integrate these values and principles so that you can develop programs that will directly meet the critical need of the village.”

She says the critical need of every village can be applied to a county, district, government, the Pacific Island Region, State, Federal and an International institution.

“We need the basic necessity of life to survive and definitely the environment; the air, water, ocean, watershed, and wetland provide us with boundless opportunities to protect, preserve,” she pointed out. “There seems to be a disconnection between government policy, political rhetoric, and changing of people's behavior to genuinely care for the environment.”

“From a village base perspective, changing people's behavior for a cleaner and safe environment is not a priority on a long term period as each village has its own competing priorities, not to mention each family struggling financially,” Samoa said.

Additionally, the reality of climate change and global warming is a threat to every village as the coastal shoreline is being eroded, streams being infested with trash and chemical solution, wetland reduction with development, and the list goes on and on.

“These are the issues I worry about as the environment is also interconnected to health and the economy,” she continued, adding that she will stay focused on a wonderful federal program managed by the Department of Marine and Wildlife Resources “to restore our Leone village coral reef and wetland, and writing up a coastal village wetland management plan incorporating all the best practices provided by previous studies.”

Samoa continues to volunteer "on any programs that will build local capacity for our children and the entire community.”

Samoa was among a handful of local residents interviewed last year for a story on the US project called, “America’s Eroding Edges”, which included a look at erosion at American Samoa’s shoreline due to climate change, and she shared the problems regarding Leone, one of the hard-hit villages in the 2009 tsunami. (See Samoa News June 29, 2016 edition for full story.)

Besides Andra Samoa, three other Samoan women are profiled in the “Inspiring Pacific Women” campaign.

They are: Fiame Naomi Mata’afa, the first woman Deputy Prime Minister of Samoa; Elisapeta Tuupo‐Alaimaleata, an American-Samoan educator and founder of the Honolulu-based Le Fetuao Samoan Language Center; and 19-year old Brianna Fruean, a climate change advocate in Samoa, whom at 11 became a founding member of the grassroots climate change movement “350.Samoa” and leader of the environmental group “Future Rush”.

More details on all the published profiles and other information can be obtained at <www.spc.int/70-inspiring-pacific-womens/>