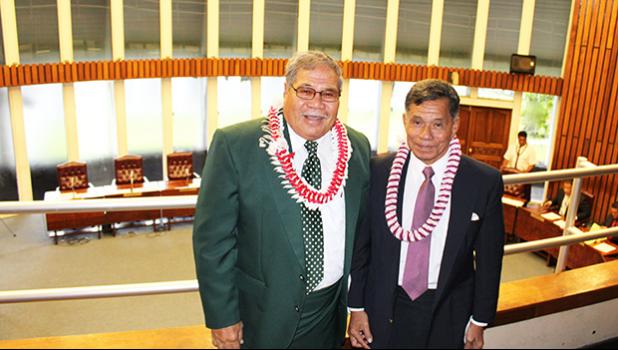 “A man of high standards, principle, high value, integrity and man of honor, thanks for returning to serve your people,” were praises sung by Faimealelei Anthony Allen during the confirmation hearing of Samana Semo Ve’ave’a yesterday morning.

During the hearing, Samana informed the lawmakers that there are “important” issues that need to be addressed immediately, for example there is no back up to all of the records stored in the Vital Statistics vault. “There is a total of 2.28 million records in the vault and if anything happens to it, we will lose all those records, as there is no backup plan. I know it would be an expensive process, but it has to be done, our records need to be safe and secure,” said Samana.

He told the hearing that another issue that he’s looking at is the increase of drugs entering the territory and that’s a delicate and important issue that needs to be addressed.

Samana said that another “delicate matter” he wants to work on is that American Samoa has no terrorism plan and that is something that is a “must” to have on hand.

Vice Speaker Fetu Fetui Jr who commended Samana for an exemplary resume and his service in the military, then urged him to be fair with his employees and not to show any nepotism among the staff.

Rep Puleleiite Li’amatua Tufele was concerned if there has been any major withdrawal of funds given the new US president on board, further noting that the DHS budget is 85% federally funded. Samana said there hasn't been any communication between the local DHS office and US DHS, however he’s optimistic from reports he's seen in the news that President Donald Trump is in supportive of funds allocated for the department of homeland security.

Faimealelei told the DHS employees who were in the galley that their “new boss” is the  type of person who does not take any nonsense.” The lawmaker pointed out that when Samana was in charge of the JROTC, he oversaw the JROTC (Junior Reserve Officer Training Corps), and there was no evacuation plan in case of a natural disaster and “he’s the one who wrote the plan and carried it out and that’s one of his many accomplishments that I hold highly and he’s more than qualified for this job.”

Vailoata Eteuati Amituana’i urged Samana to look at having a shortcut road on the mountains from Utulei to Faga’alu in case of a disaster; there is a secondary road that can be used.

Vui Florence Vaili Saulo asked the nominee if there are any federal grants available that can be allocated for government employees to undergo random drug testing, as we need to have that on hand.

She pointed that a measure was introduced in the House to mandate the drug testing but it didn’t get through. She said that it’s an expensive process but it’s something that should be done.

Sam Ioka Ale Meleisea also put it to the nominee that there is a federal program called 10:33 where DHS can fund gear and equipment for law enforcement officers and that could be a huge help to the Department of Public Safety, which is facing a lot of issues, especially the lack of proper police gear. Meleisea said that with the gear on hand, it could help alleviate the drug problems when police officers are fully equipped. He urged Samana to work together with the DPS Commissioner.

“Although it’s with the farmers now, but some will benefit while others don't get anything and it’s not fair, that’s why it should be with your department,” he said.

Faimealelei noted that there was an “onion” farm project in Manu’a and $300,000 was spent on it, yet it wasn’t successful.

He urged Filifaatali to hire someone from Manu’a to oversee that type of project, if they anticipate having another one — but not hire off island contractors to come plant onions in Manu’a.

Faimealelei also inquired if the department has on hand a scanner that tests the quality of the produce as to the amount of chemical used on it, and Filifaatali said no. The faipule urged the nominee to get this type of equipment because “we are feeding our children.”

He said, “The affect may not kick in right away but your children will suffer when they grow old and we have to do something about this very important issue.”