Gubernatorial candidates wrestle with the alarming rise in domestic violence 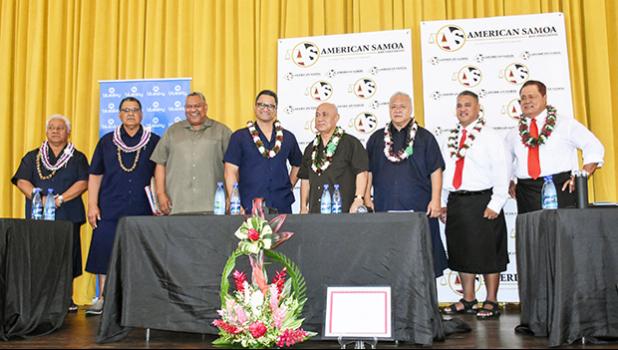 How can we reduce the rate and provide help to survivors, ASBA forum asks?
By
Fili Sagapolutele
fili@samoanews.com

Pago Pago, AMERICAN SAMOA — Domestic violence cases before the court have been on the rise in the territory and was an issue raised by the American Samoa Bar Association during its gubernatorial forum last week.

Talauega calls “domestic violence” a disease — using the Samoan word “fa’ama’i”, which he says affects gatherings such as the forum, villages and churches. He reiterated the team’s goal is “not to manage” domestic violence “but to completely eliminate it.”

“How do we do this? And we can do it, if we all put our minds to it. Join together, we can eliminate domestic violence,” he said. “We start by educating. We start by standing on top of the mountain and yelling to the people who are doing it — you tell them stop.”

“You tell dad ‘stop beating on mom’ — like that 7-year old girl did when she saw [her dad] beating on mother,” he said referring to a court case this year, in which the 7-year old girl called police on her father for allegedly assaulting her mother. “We need more people like that. [And] We need adults to speak up when this happens.”

He also said there’s a need to educate the public on this issue starting from when they are young, such as in schools, village level and churches. He acknowledged the work done by local non-government organizations (NGOs) to prevent and educate the community on the prevention of domestic violence, although “not paid by the government but they do the work, it’s important.”

“We need to focus on enforcement. We need to encourage the victims to speak up,” he said noting that these types of cases are difficult to prosecute, citing the time during his tenure as Attorney General, because people are ashamed of what happen.

“But we need to change that mentality and shine the light on domestic abuse because it’s an evil that we can and we will destroy under a Lemanu and Talauega administration,” he added.

“The Nua and Satele team believes that domestic violence is one of the most misunderstood issues. It’s kind of emotional when you think about the victims of domestic violence,” was the response from Tapumanaia Galu Satele Jr., candidate for lieutenant governor and running mate to candidate for governor, Sen. Nuanuaolefeagaiga Saoluaga Nua.

Tapumanaia said that one of the top pillars of the Nua and Satele platform is families. “A government that is built on the foundation of families. The mindset that we have to have when we look and address domestic violence has to begin with our understanding of the value of families,” he said. “Families are important, building harmony, building love, and building appreciation for each other.”

He said there should be social programs for the victims, such as safe transitional housing, counseling, child care, skill training life skills, education of job training — “to help victims get back on their feet.”

He observed that one of the hardest things to understand is what the victim goes through because “we see them stay in a relationship” and “sometimes the victim believes they are at fault.”

“Nua and Satele believe government has a major role to design social programs to meet the different needs and interest of families of domestic violence,” he points out. “We believe that while the solutions to address domestic violence will encompass a broad range of interventions and options for survivors, strategies must be trauma-informed and survivor-centered.”

Furthermore, “it is our goal that we truly empower survivors of domestic violence by providing them with the tools to establish economic self-sufficiency, short term goal setting, and long term planning for their future,” he concluded.

In his response in Samoan, candidate for governor, Senate President Gaoteote Tofau cited Samoan proverbs where in the Samoa culture women are highly regarded and protected. He recalled what his father had told him and his siblings regarding any man who assaults his wife and children. And that man is a coward (pala’ai) and stupid (fa’avalevalea).

Candidate for lieutenant governor, Sen. Fai’ivae Iuli Godinet pointed out that the government currently has programs such as those through the Department of Human and Social Services as well as the Catholic Social service education, which also offers programs, with counselors meeting with families involved to discuss such matters.

Additionally there are also coalition programs in village and counties — called Strengthening Samoan Families (SSF) — which provide an opportunity for parents and children to hold discussions, through a facilitator from DHSS. He said village councils should also be involved to find solutions and come up with programs to address this issue.

He said Gaoteote and Fai’ivae believe in further improvement of existing programs to address domestic violence in the territory.

Candidate for governor, I’aulualo said domestic violence is an issue where there’s a need for the government, families, villages and churches to work together to address it.

He noted that when he was director at DHSS, there were incidents that the victim, the woman, would decline to move forward with a case in court and would want to withdraw a complaint. “And this happened many times,” he said.

“If elected, we will propose a law — called a three-strike-law,” he said, and explained the proposed law would say that the victim — the woman — would not be able to withdraw a complaint after it’s filed three times in court. He said the matter will then “become a responsibility of the government.”

Also if the team is elected, it will continue current programs as well as focusing on training and educating police “so they … know how to deal with domestic violence,” he said.

He stressed that the government alone cannot “solve by itself” domestic violence in American Samoa without the support of the entire community, “because our culture plays a lot in that.”

Samoa News will continue to report on the forum questions in future editions.