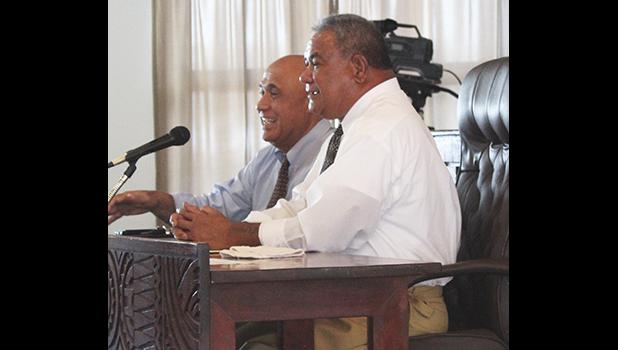 This bill, would increase the contribution rate for both government and employees to the ASGERF by adding a “3% increase” to ASG’s contribution from the current 8% while the members’ contribution goes up from 3% to “5%”.

The bill’s preamble states that records from the Fund presented to the Fono show that ASGERF paid out $25.3 million in benefits and refunds but it only brought in $10.8 million from contributions — resulting in a $14.5 million shortfall between contributions and payouts.

The Fund’s investment earnings covered the shortfall, it says.

Therefore, “it is imperative for us to increase the contributions” from ASG and the members “if we are to keep our Fund solvent for our future generations,” the preamble says.

This legislation, which does not provide for a funding source, is identical in wording to the one endorsed by the Fono in the First Regular Session, but it was vetoed in April by the governor, who informed Fono leaders that the legislation does not identify a funding source for the increase in the government contribution and, in addition, the raises in government and employee contributions “are too high.”

The Senate’s second retirement bill passed by the House, seeks to change the composition of the ASGERF board of trustees with at least “five” members who are members of the Fund, and “two” members who “have” experience in the private sector/business community.

The bill’s preamble points out that it’s imperative to have a fully staffed Board of Directors for the Retirement Office in order to conduct business and it’s “incredibly important” these board members “be fully invested in protecting the Retirement Fund and helping it to grow.”

Another measure approved by the House last week is the governor’s nomination of Sen. Togiola T.A. Tulafono and local businessman Lotoaoali’i Joseph Toloa’i Ho Ching to the government-owned Territorial Bank of American Samoa (TBAS) board of directors. The nominees have already been approved by the Senate.

Lemanu said he is confident that Togiola’s extensive experience in Education and Law will be an asset to the TBAS board.

For Lotoaoali’i, the governor said, the nominee is president of CBT Ho Ching & Co., Inc — one of the longest running locally operated businesses in the territory. And that Lotoaoali’i has been successfully running the company for more than 5 years.

“His expertise, together with the other TBAS board members will advance the banking services we provide to our people,” Lemanu said.

Meanwhile, a House bill seeking to amend local law to include the island of Aunu’u in the ASG schedule of per diem rates for travel within the territory was introduced in the Senate early last week.

Under current statute, the schedule of per diem rates for travel within the territory covers only Tutuila, the Manu’a island group and Swains Island. The House bill, seeks to add Aunu’u island.

The Human Resources Department director sets the per diem rates for travel, according to local law.

The legislation remains in the Senate committee to be taken up when lawmakers return in January next year for the Third Regular Session of the 37th Legislature. It is also during the first day of the session, that the governor is mandated by law to deliver the State of the Territory Address, during a joint-session.