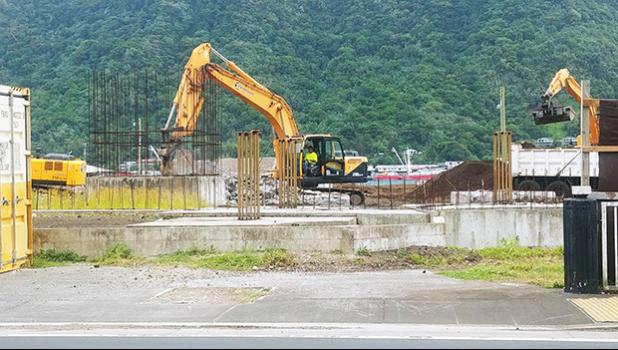 According to the governor, the estimate cost of the building has been “revised upward to $35 million.”

Construction of the Fono building was put on hold since last year, following concerns raised by FEMA that the structure is built in a flood zone (VE Zone) and that “all new construction in this flood zone must be built using post and pier construction to elevate the lowest floor Base Floor Elevation (BFE), with no obstructions under the building.”

ASG had fought back, but FEMA argued that buildings using a perimeter foundation, fill, or an elevated slab — which is what ASG wanted to do for the Fono building to keep the cost down — are not permitted in the VE Zone and if the Fono building was built ‘as is’ American Samoa would lose its federal flood insurance, and loss of future federal disaster funds.

In a letter last week Friday, the governor sought Aumua’s assistance for congressional funding to ensure the Fono building, offices of lawmakers, and all support facility are fully completed.

Lolo told the Congresswoman that $15 million is dedicated to complete only the meeting chambers for the Senate and House, exclusive of the offices and staff support facilities. He explained that ASG had to go to the bond market - referring to the 2018 bond series - to secure the $15 million.

“And it appears that we are getting some push-back on the use of our Capital Improvement [Project] Funds annual allocation for the Fono complex,” Lolo further explained.  With FEMA “remaining adamant with its designation of the Fono sight as a VE zone, and its uncompromising demand to place the Fono structure on piles, the total estimated cost has now been revised upward to $35 million,” the governor wrote.

He said this is one of the examples of federal policies, which are “developed and instituted in a vacuum relative to actual occurrences on the ground and consideration of local knowledge and experience, let alone being sensitive to the physical layout of the island and very limited flat land in the bay area.”

The governor requests Aumua’s assistance to “secure $20 million or more special appropriation from Congress to facilitate the completion” of the Fono complex. “It is obvious that we will not get any leeway with the current annual level of Capital Improvement Project fund pool for this crucial project,” he wrote. “As time is of essence, your immediate attention is humbly being solicited because the current facilities being used to accommodate the needs of the Legislature are grossly inadequate.”

During the building’s groundbreaking in early August last year, it was announced that the project is for the Fono building construction only, while offices for lawmakers will be added later. The governor told cabinet members last week that the Fono project is back on again, with changes made to the foundation. The actual construction of the structure will begin later this month or next month. Lolo didn’t elaborate on the changes to the foundation, or mention plans to seek federal funding.

Samoa News notes that more than a week ago, construction work resumed at the worksite. It’s understood that equipment is already on island to install the piles.

Of note, Samoa News should point out that two construction companies submitted bids for the new Fono building project — Paramount at about $13 million and Fletcher at around $20+ million. Samoa News understands Fletcher’s bid included pilings, Paramount’s did not. Paramount won the bid, as lowest bidder.

However, with the piles now a must — it’s unknown if the additional $15 million the governor is asking for includes the cost of the pilings, as well as the offices; and if the government is now just handling this additional cost as a “change order” on the original bid that was won by Paramount?

The bid for the Fono building construction project was an IFB (Invitation for Bid) — where evaluation of bid is solely on the basis of price.