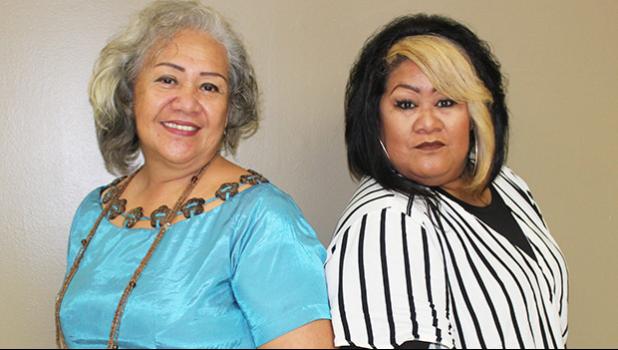 The “Al-Shehri, F. and L.A. Smith” team made their official confirmation during a Samoa News interview, yesterday, where they shared the reasons behind seeking the top elected positions in American Samoa.

And after 40-plus years, “I would like to ask this question to every constituent: How has it been for you? I know for a fact that it has not been good for me,” said Al-Shehri, who has previously run for public office — the congressional race and the Alataua House seat.

“I thought to myself, ‘there’s a lack in this equation’. It has been men — the masculine part has taken over for 40-plus years. And surely the equation is not balanced. It’s incomplete,” said Al-Shehri, who holds a Bachelor of Arts in Political Science.

“We need now the feminine part to rise up and to complete, fulfill the unfinished work that is not being done,” she continued, noting that in the future, she will go into details on what is not finished. “However, each and every one of us can testify to what [that] hasn’t been given.”

Smith — who holds a doctorate in Pastoral Care, with a background in Psychology — explained that her decision to run as Lt. Governor, “is only simply because I am one who has been burdened with the need to help our people for many, many years. Twenty-five years, I’m a pastor’s daughter. My father was a missionary. I just started to pick up the baton.”

“And I saw his love and passion for his people here and I knew that there was something great here. Growing up, seeing his love for the island and the people, he also put compassion in my heart to fulfill what my father attempted to do while he was living,” she pointed out.  “And I believe that what he wanted for his people was love… and he didn’t want his people to be lacking in anything.”

“So I believe it is time, It’s A New Season to come together and for us to help encourage one another and women, especially, because It’s A New Season for women to come to the forefront and start being used in positions that otherwise have been taboo,” said Smith, who added that she is honored to be at the side of Al-Shehri in this 2020 campaign.

The candidates said they have already identified several issues for their platform which will be further discussed and released on the campaign trail leading to the November 2020 election.

Asked to share at least two top priority platform issues, Al-Shehri responded, “The very first thing that we’ve decided to look into is hospital care. We definitely need a new hospital, not extension to the old.”

“It’s a New Season and we need a new whole complete hospital,” she said. “And we say this with excitement because we’re part of this medical mission called, Mission of Hope,” which is currently negotiating for land with the government to build a medical clinic.

“The clinic will be built very soon and will be staffed with medical doctors from the US who will head the clinic. This is just a clinic, but we need a whole new hospital,” she said.

Another “high priority” is a “new upgraded” Pago Pago International Airport, said Smith. “We are in dire need of a second airline” to serve the Honolulu-Pago Pago route.

Al-Shehri added, a “new airport that has a control tower, which is a very essential part of the airport. It’s by the grace of God that there hasn’t been any major accidents at the airport, where there is currently no control tower.”

(The Tafuna airport has been without a control tower for many years and Samoa News has reported over the years, that the FAA had said there isn’t sufficient passenger traffic to justify the FAA funding a new control tower.)

“Our hope is to bring more jobs, through these new buildings and construction projects. We want continued jobs and higher wages to be paid to our people,” said Smith.

The “Al-Shehri, F and L.A. Smith” team is currently working with its campaign committee on their quest to win the 2020 election. “One of the exciting things about our campaign is that we’ve got some off-island people, who are willing to come be part of this campaign,” said Al-Shehri. “We also have women here and we’ve got friends ready to come on board.”

“It’s a New Season”, and “It’s a Season of Power & Prosperity” for the 2020 general election, the team concluded.