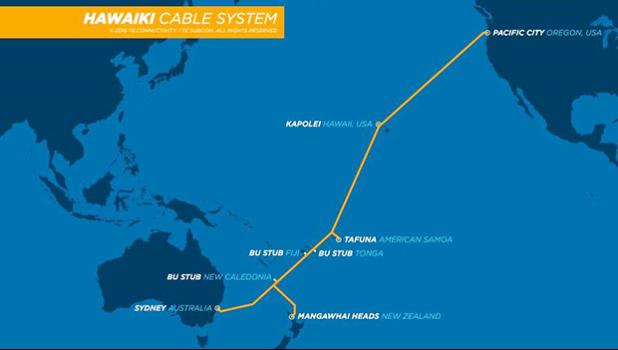 Proposes to increase local cap on investment from 17.5% to 35%
By
Fili Sagapolutele
fili@samoanews.com

The branching unit cost $29 million, funded with money ASTCA received through loans from the Retirement Fund.

Now that is about to change. In a letter to Fono leaders, Gov. Lolo Matalasi Moliga outlined proposed changes to the Retirement Fund, beginning with the local investment cap which Lolo says is at 17.5% of Retirement Fund assets, since its inception.

“This cap, while reflected broad industry standards at the time, has limited what the Fund can invest in the territory,” he explained. “Over the years, the Fund has had excellent returns on its investments in American Samoa, earning its target rate of return and suffering no events of default.”

According to the governor, the Fund’s investments in the territory “have in fact fared well and been more stable in comparison to its broader market investments, which have suffered from the ups and downs of U.S. and international markets.”

The Retirement Fund, Lolo says, now has the opportunity to make significant investment in the Hawaiki Cable project, which the governor says is “a major game-changer for American Samoa’s broadband connectivity to the rest of the world.”

In order to facilitate the opportunity, Lolo said it’s necessary to hike the investment cap in American Samoa, and proposed the increase from 17.5% to 35%. “This will accommodate the Fund’s current position along with the new Hawaiki investment,” he said.

“We believe the Hawaiki Cable Project to be American Samoa’s most important infrastructure investment of the last 50 years,” said Lolo, who noted in the proposed bill’s preamble that it’s “in the best interest of the Fund and its present and future members to allow the increase of the Fund’s investment” in the territory.

The proposed new section of the Retirement Fund statute, is titled, “Investment in American Samoa Hawaiki System”— which explains what’s already been made public about Hawaiki and ASTCA, for example, the two parties have entered into a capacity agreement, giving ASTCA the right to use 200 gigabytes. What is new information, is that the agreement for this capacity is for 25 years.

The proposed law comes at a time when ASTCA is hoping to attract neighboring countries as customers for the American Samoa branching unit of Hawaiki cable.

During the launching of the unit on July 19, ASTCA acting chief executive officer Falaovaoto Sualevai said ASTCA has reached out to neighboring countries such as Samoa and Cook Islands “and also the Manatua Cable Consortium members” to connect to American Samoa.

A news release last Thursday by the Cook Islands government identifies the consortium members as the governments of the Cook Islands, Niue, French Polynesia and Samoa — and also mentions ASTCA as well as Hawaiki.

It says that a “recent approach was made from proponents of ASTCA” to the Cook Islands government, seeking support to consider a new branch cable from American Samoa to the Manatua Cable — including a branching unit on the Manatua Cable — which would enable a third gateway to the global internet via American Samoa’s connection to the Hawaiki cable.

However, a formal offer from ASTCA with pricing details has not been submitted for consideration. The Cook Islands government, according to the release, does not consider that a third indirect connection via American Samoa will offer a substantially better deal, as claimed by some of the proponents for this new connection.

“There are alternatives available to ASTCA to connect to the Manatua Cable that may be utilized in the future by the Cook Islands without impacting on the existing Manatua Cable plans,” according to the release published by Cook Islands News online.

The proposed measure, repeals three current sections of the Retirement Fund law, dealing with “loans the Fund made over the years to the American Samoa Government but were paid off with bonds issued by the American Samoa Economic Development Authority (ASEDA),” according to the governor.

Samoa News notes that the last ASG loan from the Fund, was $20 million for capital infrastructure projects.

This latest bill from the Lolo Administration is expected to be introduced soon in both the Senate and House. This week, the Fono is focusing attention on completing by Friday, fiscal year 2019 budget hearings, before taking up other bills.

Samoa News ran a Just Asking, “Is ASTCA funding from Retirement a loan or an investment?” in its July 30, 2018 issue after the ASTCA acting chief executive officer, Falaovaoto Sualevai said that the ASG Employees' Retirement Fund (ASGERF) had invested in the multi-million-dollar project during her power-point presentation at the official launching of the $29 million American Samoa branching unit of Hawaiki cable in July.

Using the ASTCA Financial Statement report — Years Ended Sept. 20, 2017 and 2016 — Samoa News noted that in Note 7 — Long-Term Debt — the auditors pointed to money received from the ASGERFas in the form of loans — but that the American Samoa Government was in negotiation to convert one of the loans from debt to equity, “as of the date of the financial statements.”

Governor Lolo’s current proposal to raise the Retirement Fund’s local investment cap is unclear — if its related to this — money already loaned to ASTCA — or clearing the way for more loans/ investment from ASGERF in Hawaiki cable, via ASTCA.