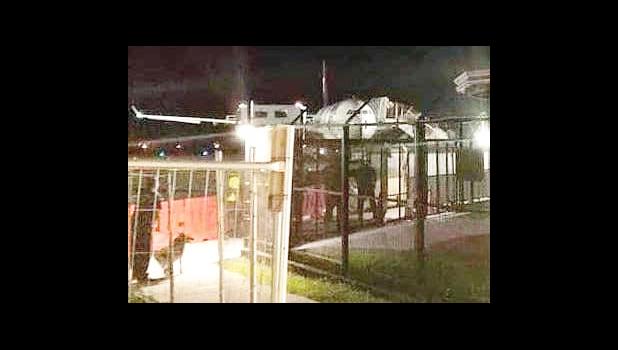 But even before that, social media was already abuzz with locals offering prayers for the safety of the passengers and crew, including local airport workers and community members.
Thirty minutes before the flight landed, Samoa News received an update saying that as a result of the bomb threat, all arriving passengers will be screened before getting to immigration. Those who were at the airport to pick up passengers would be instructed by DPS officers - who were on site - of where they can meet the arriving passengers.

But this all changed, according to a Samoa News source, who said the bomb threat protocols were canceled, minutes before the flight landed. Samoa News understands that the Chief of Customs had briefed his staff on the protocols for the operation but not long afterwards, Lt. Governor Lemanu Palepoi Sialega Mauga made the call to cancel it.

At 10:36 p.m. (Hawaii Time) last night, KHON 2 News in Hawaii quoted Hawaiian Air spokesperson Ann Botticelli as saying there was no threat to the aircraft (HA 465), and this was determined by Lt. Gov. Lemanu in American Samoa. Botticelli is further quoted as saying HA 465 landed without incident and is at the gate, and is expected to operate as normal.

Initial reports of the bomb threat were dismissed by some, at first, until Homeland Security director Samana Semo Veavea confirmed that an anonymous call was received yesterday afternoon, about a bomb being on board Hawaiian Air’s fl ight from Honolulu to Pago Pago.

This set off a frenzy.

As a result, the Pago Pago International Aiport was on lock down. Plans were made to secure the aircraft when it lands. All passengers were to be taken into the departure lounge
while authorities carry out a thorough check of the aircraft. Furthermore, no bags were to be released.

At 10p.m. local time, Samoa News was informed by airport sources that everything was back to normal - all passengers disembarked the plane safely and they all went home, with their bags.