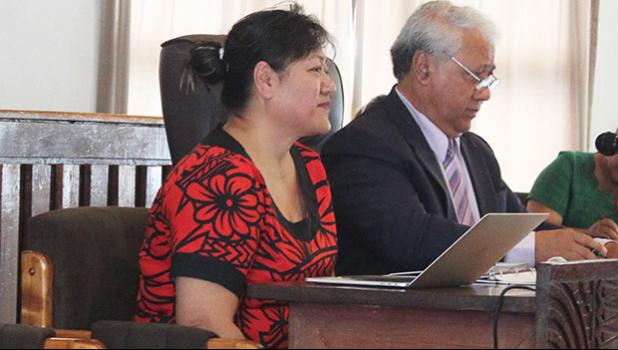 Sen. Logovi’i: describes the about $18 million as “dream about it” money
By
Fili Sagapolutele
fili@samoanews.com

Pago Pago, AMERICAN SAMOA — American Samoa TeleCommunication Authority’s proposed fiscal year 2019 budget of more than $43 million in revenue includes over $18 million from the ASG Employees Retirement Fund that the authority has requested, but is not yet approved, according to information revealed at yesterday’s ASTCA budget hearing.

ASTCA, during their budget hearing, was represented by acting chief executive officer Falaovaoto Sualevai and board chairman, Sen. Fai’ivae Iuli Godinet, who told lawmakers, among other things, about the improved technology in local telecommunication with Hawaiki cable system launched last month.

At the start of the hearing, Fono Joint Budget Committee co-chairman, Sen. Magalei Logovi’i sought to clarify financial numbers cited in the ASTCA budget book submitted to the Fono on Tuesday.

For example “actual” revenue for FY 2017 was $21.17 million (which is also the budget), but Magalei noted that the FY 2017 budget approved by the Fono and signed by the governor, gave ASTCA a $19.9 million budget for that fiscal year.

However, Magalei emphasized that the FY 2018 budget approved by the Fono and signed into law by the governor, has ASTCA’s approved budget at only $21.9 million.

Sualevai said the reason ASTCA budget documents reflect $41.13 in FY 2018 is because it includes $23 million in payment for Hawakiki — $6 million for the bridge loan from the  Retirement Fund and $17 million on the IRU agreement with the Retirement Fund for payment to Hawaiki.

For FY 2019, ASTCA is proposing over $43.34 million, while the ASG threshold for the budget is $21.99 million — which is the approved FY 2018 budget amount, according to ASTCA’s budget book, which notes the “excess budget” amount of over $21.35 million as well as a brief explanation for the excess amount:

•    additional obligation to the O3B satellite contract, that is still active — resulting in an additional requirement for an expenditure of $3.1 million.

Sualevai acknowledged that ASTCA has not received this money, to which Magalei asked, “What happens if the request is not approved, what next?”

Sualevai responded that ASTCA would look for another funding source, such as a loan with a bank.

Magalei then gave an explanation of the budget process, saying that if the annual budget is passed by the Fono and signed by the Governor, that is “the law” and that’s the ceiling amount in the budget to be used by any agency.

And any excess revenue collected that is more than the approved budget, requires Legislative appropriations before it’s used, said Magalei who served as ASG Treasurer and Budget Director in previous administrations.

According to the Tualauta senator, who is also the Senate Budget and Appropriations Committee chairman, ASTCA’s FY 2019 proposal includes $18.25 million to come from the Retirement Fund but it’s not known if it will be approved or not.

He believes that this amount should not be included in the proposed budget, but instead should be submitted later as a supplemental since that is the budget process.

Magalei describes the $18.25 million as “dream about it” money, which has “ballooned” the FY 2019 budget. He said this money is revenue that is not a sure thing because the Retirement Fund has not approved ASTCA’s request.

According to a brief summary in the ASTCA budget book, the semi autonomous agency’s internet revenues and prepaid mobile revenue form the basis of growth for FY 2019; while personnel, materials/supplies and other expenses were reduced further to bridge the deficit gap. Additionally, non-revenue funding was “updated based on assumptions of funding to be received.”

According to the ASTCA FY 2019 budget document, the $18.25 million from the Retirement Fund is forecast as a non-revenue funding source. It also says that ASTCA has been working with the Attorney General and the Governor’s Office to obtain additional funding from the Retirement Fund to meet the obligations of Hawaiki due in 2018 and 2019 financial years.

•    $2 million — the governor had indicated initial discussions on the potential to receive this money for 2019 to assist with capital project works. And this funding is expected to support capital expenditure plans.

•    $1.92 million in US Federal Emergency Management Agency (FEMA) proceeds for Tropical Cyclone Gita assistance. ASTCA had submitted an initial claim for $3.2 million, however, the last correspondent received indicated that FEMA has reduced their assessment amount. Therefore, ASTCA is expecting that at least 60% of the claim could be received.

•    $912,025 for US Internal Revenue Service (IRS), FICA payments. Based on discussions and letters received from the IRS, the refund is expected to be received in FY 2019 in installments for FY 2014 and 2016 fourth-quarters.

Samoa News will report in future editions on other issues raised during the budget hearing.

Samoa News reported this last Monday (Aug. 27, 2018) that in a letter to Fono leaders, Gov. Lolo Matalasi Moliga outlined proposed changes to the Retirement Fund, beginning with the local investment cap which Lolo says is at 17.5% of Retirement Fund assets, since its inception. He is proposing an increase to 35%, and specifically notes that “this will accommodate the Fund’s current position along with the new Hawaiki investment.”

The acting CEO of ASTCA was not asked during the budget hearing about the $18.25 million that Magali says is “dream about it” money — whether it was to be a Retirement Fund investment or a loan.