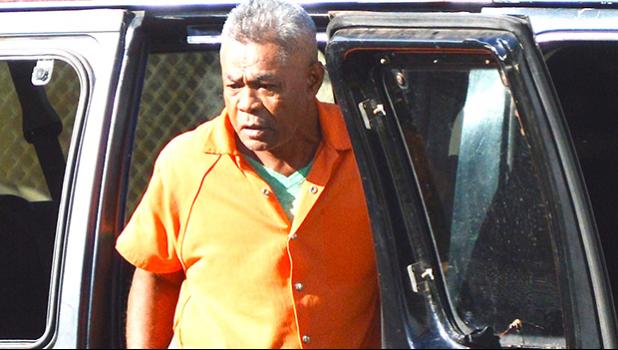 Pago Pago, AMERICN SAMOA — Fifty-five-year old Iakimo Felise exits a police van outside of the District Court last Friday. Felise waived his rights to a preliminary examination, and his case was bound over to the High Court for arraignment this morning at 9a.m.

District Court Judge Fiti Sunia denied the defendant’s request to set bail in his matter and Felise is being held on a “no bail” status.

The defendant was arrested last Wednesday afternoon in Nu’uuli after allegedly raping and molesting a 10-year-old girl several times. According to court documents Felise is alleged to have given the girl money at the time of the alleged sexual encounters.

This is not the first time Felise has appeared in court to face charges of this nature. In November 2011, Felise was sentenced to 20 months imprisonment as a condition of a five-year probation term, after he was convicted of first-degree sexual abuse.

Samoa News has received a comment on our website asking that we issue a correction concerning where we stated he resides in our story published in last week's Friday, Apr. 27 issue:

"I would like to inform you that he does not live in Leloaloa,” the commenter wrote.

“Please make the correction, not only the article is wrong, but it also brought shame to my village...

“If you do not make this correction, I will take you to court because this is slandering... I know my rights!"

Samoa News stands by its story, as derived from court documents that state Felise is from the village of Leloaloa.