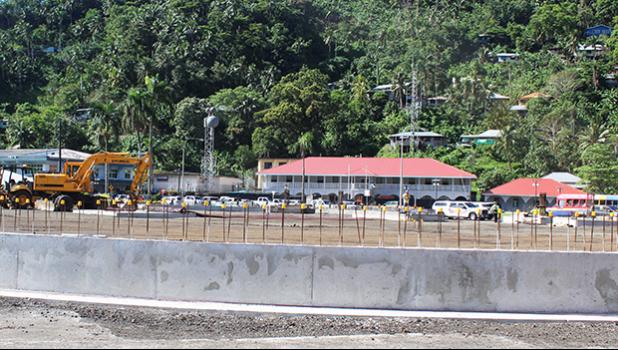 Pago Pago, AMERICAN SAMOA — Because the US Congress prohibits members in both houses from requesting “congressionally directed spending for a specific discretionary” funding, Congresswoman Aumua Amata is unable to assist in Gov. Lolo Matalasi Moliga’s request for more than $20 million in federal money to facilitate the completion of the Fono complex.

“I regret to inform you that the rules of Congress have not changed since your similar request last year for $50 million for a new Fono building,” Aumua wrote in an Oct. 2nd letter to Lolo, who last month requested a special congressional appropriation of more than $20 million for the new Fono building.  (See Samoa News Oct. 1st edition on Lolo’s  request to Aumua).

“So no one can introduce a bill calling for such a specific appropriation in Congress,” she said, and noted that FY 2020 appropriations have been finalized and closed for the year in both houses for several months.

Aumua referred the governor to her letter last year — to Lolo and Fono leaders — when the governor requested $50 million to fund a new Fono building.

“Congress expressly prohibits Members of Congress in the House and Senate from requesting ‘earmarks’ or congressionally directed spending for a specific amount of discretionary funding other than through a statutory or administrative formula-driven or competitive award process,” she wrote.

In her July 12, 2018 letter, Aumua suggested that the Governor and Fono leaders direct the $50 million request to the US Department of Interior rather than specific legislation as the “rules of the House and Senate prevent directly specified and unfunded earmarked projects and is inconsistent with the long-established funding process for American Samoa” through the USDOI’s Office of Insular Affairs.

Aumua again offered the same suggestion to the governor’s new request for $20 million, to go through the USDOI, and once the Trump administration submits legislation, “I will work to guide the request through Congress.”

The Congresswoman went on to share “good news” with the governor, that the US Senate has agreed with the House and rolled back proposed cuts of almost $2.5 million and added an additional $400,000 to the ASG operations budget — in the Interior Appropriations Act.

She said final passage of the legislation is expected in late November or early December and funding levels will be retroactive to Oct. 1st at the higher funding levels.

Meanwhile, “my top priority focus on capital improvement projects remain our badly deteriorating hospital,” Aumua said, noting that she will bring to the territory this week a bipartisan delegation of US House Veterans Affairs committee members “with a primary mission to see first hand the condition of LBJ.”

The congressional delegation is led by committee chairman US Rep. Mark Takano and includes visits to the Philippines, Guam, Northern Marianas Islands, and Hawai’i.  No specific date is known yet on when the delegation lands in Pago Pago.