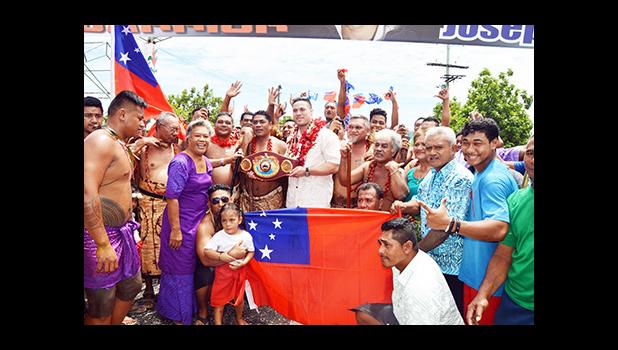 Apia, SAMOA — WBO Heavyweight boxing champion La'auli Lupesoliai Joseph Parker arrived in Samoa Sunday morning and was welcomed with opens arms on the main highway by the LeAuva'a Village Council and members of the public. The WBO Champ was greeted with banners and a crowd of people who were dancing in the hot sun and causing traffic jams for more than half an hour. Fans, families and friends greeted the Champion on the main road and onto the guesthouse where they held a short ceremony welcoming the WHO Champion in Faleula, Samoa.

During the press conference at the Faleolo International Airport, Parker acknowledged how happy he is to be back in Samoa. “It feels great to be back home, I love Samoa, I love being here and I’m looking forward to seeing everyone on Wednesday at the parade.” He responded to public criticism noting that people will always criticize no matter what. “When you're doing well and you're successful there are always people who will criticize you. I watched the fight again and I won, I saw it and I won and I’m happy with the result and when you’ve won you’ll always get criticized and that gives you motivation to train harder.”

The WHO Champ noted that his next fight is in April but for now he’s taking a break and then heads on back to training in Las Vegas. “I’m grateful for the support from Samoa for the Tapuaiga, and also thankful to the government for putting up money and for their great support and I feel the love and I look forward to actually see everyone in town.”

Parker said Samoa has been behind him since the beginning and he’s thankful for that. He also noted that he has visited Samoa since he was an infant and will continue coming back to Samoa. In response to questions Parker stated that it was unclear why New Zealand did not “back” him up but stated that he hopes they do with the next fight and noted that Samoa has been there since the beginning of his boxing career. Following the press conference, Parker also acknowledged his supporters from American Samoa and noted that he will make time to visit next year when things slow down in his career.

“Thanks American Samoa for your support, and I hope to visit you next year... thanks again for your support, Pago Pago,” said the WHO Champ. Last month the Samoa Government pledged their support for Lupesoliai and donated $100,00 USD. The funds were approved in Cabinet and Samoa’s Prime Minister Tuilaepa Sailele Malielegaoi stated that this would be a great opportunity to promote Samoa with 100 million global viewers. As in past fights, Parker showcased both the flags of New Zealand and Samoa and also the National Anthem of Samoa and New Zealand prior to his big fight.

Parker defeated Mexican American Andy Ruiz Jr. at the Vector Arena, in Auckland, for the WBO world heavyweight title last week. Samoa News notes that this is the first time the WBO World Heavyweight Championship has been contested in New Zealand and the title was vacant after British champion Tyson Fury relinquished it last month. Parker will meet with the Prime Minister at his office Monday morning (Samoa Time) and there will be a parade through the heart of Apia on Wednesday morning.