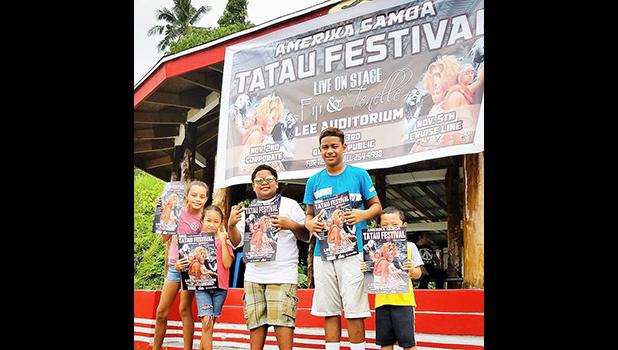 Pago Pago, AMERICAN SAMOA — Ten Polynesian artists will be tattooing LIVE at the Lee Auditorium in Utulei during the Amerika Samoa Tatau Festival, set for Nov. 2, 3, and 5.

All but one of the artists is of Samoan ancestry.

It is a spin-off of the Northwest Tatau Festival, held in Washington State every year for the past three years, and hosted and coordinated by tattoo artist Whitey Chen and his sister Blue Chen-Fruean.

The brother/sister duo have had their mind set on bringing the fest home to American Samoa for a while - and it is finally happening.

This Friday, the festivities kick off with LIVE tattooing at the Lee Auditorium starting at 11a.m.

Avid tattoo fanatics will have the chance to see the action LIVE.

Master tufuga ta tatau Su'a Suluape Alaivaa Petelo and his son Ata will be tapping away at the au as six brave young ladies are scheduled to get their malu during the Festival.

And through collaboration with the American Samoa Visitors Bureau (ASVB), hundreds of tourists set to arrive in the territory next Monday, Nov. 5th, will get to see something not too many visitors have seen first hand: the samaga ceremony, to officially celebrate the completion of the pe'a or malu.

The biggest cruise ship of the year is set to dock at the Fagatogo wharf that day and the Amerika Samoa Tatau Festival is excited to be partnering up with the ASVB to host the passengers and crew of the Emerald Princess.

Tourists will be able to watch LIVE tattooing, witness the samaga, get a taste of Samoan delicacies, and watch LIVE Samoan dancing and singing - all under one roof.

According to the event coordinators, hosting the Festival in the territory is a big challenge. After all, every local business they approached for assistance - during the initial planning stages - had turned them down. Attempts to get some discounts on goods and services, or even some 'comps' were all denied.

But there was no turning back. People who heard about the event were excited; the tattoo artists who were invited had already canceled their appointments for that weekend; and Polynesian superstars Fiji and Tenelle had already agreed to perform.

Perhaps good things do come to those who wait because several businesses have since stepped up and offered their assistance: Island Business Center, Samoa News, Steven & Sons, and AVE Designz.

The goal of the Tatau Festival - both here and in WA - is to help educate people about the traditional method of Samoan tattooing and also, to promote our Samoan and Polynesian tattoo artists from all over the world who ink for a living.

The line-up for this weekend is as follows:

On the mic all 3 days will be Cee Schuster, accompanied by the world famous, self-proclaimed afakasi diva, and YouTube sensation, Teine Meauli, with DJ Al in the background mixing it up.

At 5 p.m. the corporate table event will kick off with various performances by Ulale Ulale, Malaeloa Methodist Youth, New Boyz ,Evening Star Divas, Richie Reed, Tenelle, and Fiji. There is no general seating that night. Corporate tables are $600 for 6 people and there are only a few left.

Tickets are $20 and there will be a beer garden for those 21 and older. There will also be food booths, vendors, etc.

On Monday, Nov. 5th, the event will be closed off for the cruise ship tourists from 9 a.m. to noon. Doors will be open to the public from noon to 5 p.m.

(See ads in the Samoa News for the contact numbers of those selling corporate tables and general admission tickets.)