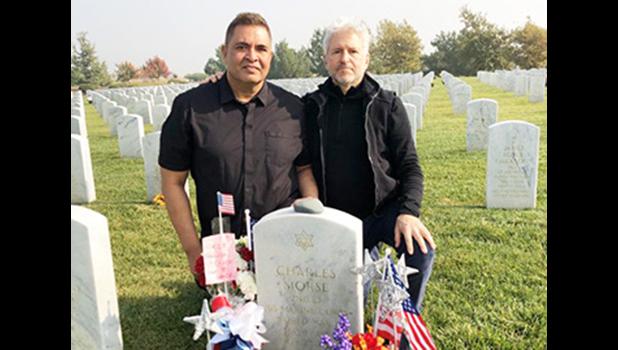 Source: BBC World Service
When Lennard Davis received an email from a stranger who said Lennard was his closest living relative, he thought it must be a scam. Lennard is a Jewish professor from New York, and the stranger claimed to be from a line of Polynesian chieftains. It took four years and the unraveling of two family secrets to solve the puzzle.

New York, NY —  In 1979 Lennard Davis's Uncle Abie told him he had a secret - but he said he couldn't reveal it while Lennard's father, Morris, was alive.

When he died, two years later, Lennard reminded Abie about the secret, and asked if he could now be told.

Initially, Uncle Abie was reluctant - he told Lennard to forget all about it, he didn't want to tell him. But Lennard pressed him.

"My parents had never told me. It was a family secret and probably, on some level, a shameful one," Lennard says.

Years passed before he decided to investigate this secret that his parents had taken to their graves. But at the age of 55, in the year 2000, Lennard decided to take some tests that would verify his paternity.

Lennard searched for envelopes that Morris may have licked that might provide a remnant of his DNA, and asked his cousin to do the same to try to harvest some of Abie's, who had by now also died.

When the first results came back, Lennard nervously opened the letter.

Years later, in 2014, Lennard was contacted out of the blue by a man from Pago Pago, in American Samoa.

He said his name was Lancelot Tauoa, and that after taking a DNA test he'd discovered a very close genetic link between himself and Lennard.

"My initial reaction was that I should be very, very suspicious," Lennard says.

But when he looked at the database where his DNA test results had been entered, Lennard could see that right next to his half-brother (the man he had once regarded as his cousin) was the name Lancelot Tauoa. The two men appeared to be second cousins.

"This was extremely confusing," Lennard says. "My family's Jewish, pretty much through and through, and suddenly there's a guy from American Samoa who turns out to be a close relative? It was a very strange, jaw-dropping concept."

Lennard remained sceptical but struggled to imagine how these two families might possibly have become linked. Was there a GI from his family who'd been posted to the South Pacific?

Lennard and Lance stayed in touch by email and, over time, Lennard's suspicions about Lance began to diminish.

"There was something very poignant about Lance's letters," Lennard says.

"Through his emails I could feel his need. He really, really wanted to know, and I identified with him, even though I had never met him."

Having already discovered that his uncle was in fact his biological father, Lennard imagined that a similar family secret must lie behind his connection to Lance.

He assumed it would be relatively straightforward to get to the bottom of the mystery, but it took more than four years, and a lot of wrong turns, false assumptions and dead ends before the truth was finally established.

More than 7,000 miles away on an island in the South Pacific Ocean, Lancelot Tauoa had never had any inkling that there were secrets in his family until the day of his grandmother's funeral in 2000. On the day of the burial, many people had come to the pay their respects, including Lance's great-aunt Eppe - his grandmother's sister - who was beside herself with grief.

By chance Lance overheard one of the mourners saying that the reason Eppe was so upset was that Lance's grandmother had raised Eppe's son, Sekele. But Sekele was Lance's father, who'd died a few years earlier - so this would make Eppe Lance's grandmother, rather than the woman being buried.

Sekele had looked a bit different to other people on the island and was known to many by the nickname, the Samoan Elvis.

"My father was very tall, about 6ft 2in, and very fair-skinned," Lance says. "He didn't like to go to church and he was really into Western movies. He was really fun."

A few weeks later, Lance decided to confront Eppe about what he had overheard at the funeral.

"She dismissed it," Lance says. "She said, 'Don't listen to that kind of gossip,' and then a few months later she passed away."

But while planning Eppe's funeral, Lance's suspicions were confirmed when the chief of their family said that either Lance or his sister would have to eulogise Eppe at the service. Their father had been Eppe's biological son, he explained.

"It was very shocking," Lance says. "I was mystified and I wanted some answers, so I went to my dad's sister, and she told me that she thought that we all knew."

Lance was told that Eppe had become estranged from her husband and had fallen pregnant as a result of a clandestine romance with a foreign man.

Lance's grandmother had then adopted and raised the child.

Once Lennard had overcome his doubts, the two men began a combined search for the mysterious American soldier who connected them.

Lennard first searched for clues in his mother's side of the family, but turned up nothing useful. Eventually he focused on his paternal grandmother's line.

"But this was a side of my family I knew nothing about," he says. "We had absolutely no information about them."

Lennard's grandmother's maiden name was Movshovich. The family had arrived in the US from Lithuania, via the UK, but it took the discovery that they had changed their name to Morse to open up the family records.

With the help of a genealogist, Lennard and Lance traced the family as far back as 1700. Then they located a distant cousin of Lennard's who said she had an old family photo album that might be of interest to them. In it they found a picture of a man who looked very familiar to Lance.

"He had his uniform on, he was smiling, he was looking directly into the camera," Lance says. "He looked so much like my father - like my father's twin. He was extremely handsome."

But who was the man in the photograph smiling back at Lance? Nobody knew anything about him, not even his name.

Another year passed before Lennard and Lance eventually established that he was the youngest son of Lennard's great-uncle, born in 1918. His name was Charles Morse and he'd enlisted in the Marine Corps in 1940 and served in Pago Pago in 1942. Lance's father had been born the following year.

In their research, Lennard and Lance found a memorial tribute to Charles Morse - who had died in 2014 at the age of 96 - written by a man called Peter Sellars, who'd been a member of the same veteran organization as Charles. The two men had been great friends.

But Lennard and Lance wanted incontrovertible evidence of Charles Morse's connection to Eppe, so Lance decided to ask Peter a very direct question: did he have any interesting stories about Charles Morse in the South Pacific?

"Yes!" Peter replied. "I have a very interesting story!"

Peter told Lennard and Lance that during Charles's time in Pago Pago he'd fallen in love with the chief's daughter, Eppe. Charles had proposed, asking the chief for Eppe's hand in marriage, but his proposal had been rejected and Charles had returned to the US alone.

After Charles's departure, Eppe had given birth to his son, Sekele, who was then adopted and brought up by Eppe's sister.

Back in the US, Charles never married or had a family, and presumably never knew that he had a child in American Samoa.