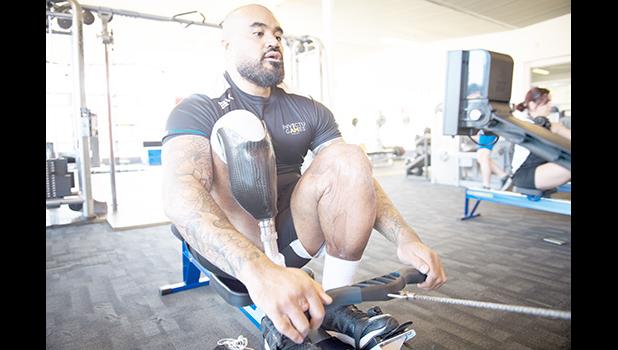 Wellington, NEW ZEALAND — Kiwi. Samoan. Amputee. Soldier. Son. Brother. Partner. Faamanu (Nu) Taulafo Filo Leaana will be tapping into all these elements that make him who he is when he represents the New Zealand Defence Force (NZDF) at the Invictus Games Sydney 2018.

The Invictus Games is the only international adaptive sporting event for wounded, injured and ill active duty and former service members. This year’s event, in Sydney from 20-27 October, will involve competitors from 18 allied nations in 11 adaptive sports.

Mr Filo, an amputee who has also suffered PTSD and depression, will compete in powerlifting, rowing, shot put and discus. He lost his lower right leg and the middle finger of his right hand at Waiouru in 2006, after a fellow soldier who had picked up live ammunition put it into a rubbish bin, and it exploded when the bin was emptied.

“It was a freak accident, which could have been avoided, but lessons were learnt from that day. You’ll now see posters up around Army camps about what you do when you see live ammunition in the training area,” Mr Filo said.

The accident happened five years into his Army career and forced a rethink. He’s now an IT analyst for the Ministry of Foreign Affairs and Trade in Wellington and is training to compete at his third Invictus Games.

“This year is different because the last couple of years my family were unable to travel to the United States and Canada but the convenience of the Games being held in Sydney means more of my family and friends will get to attend and enjoy them.

“When I’m going through my journey I will also have my family there for the ride, going through those hard times too. Seeing them enjoying Sydney will put a smile on my face.”

Parents Sinapati Leaana Filo and Senia Filo, who moved to New Zealand from Samoa 43 years ago, will be leading his family support team. Sinapati has been a minister in the E.F.I.S Church for 23 years, while Senia’s cooking means traditional Samoan dishes like fa’alifu talo, sapasui and pisupo, and panipopo are firm favourites. Not to be outdone, Sinapati does a mean lu’au.

“We still have family in Saanapu, Malie and Salelogoa,” Mr Filo said. “I’ve been to Samoa three times but it should be an annual trip really.”

This year’s Games are being presented by Jaguar Land Rover.

Throughout the Games the team’s journey can be followed on: