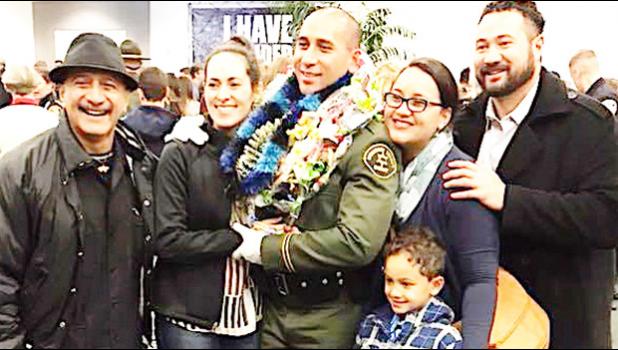 A native of American Samoa, Langkilde is the son of Tamatoa Tony and the late Bernadette “Pele” Scanlan.

“This is really great, I’m so proud of him,” said Tamatoa who attended his son’s graduation  with his daughter Teumalo, her husband Joseph Joey Willrodt, and the couple’s young son.

“Tautai was determined to join the law enforcement profession. He was contemplating going back to the Navy to become an officer, but decided to take this route instead,” Tamatoa told Samoa News.  “Tautai has a plan going forth with his life, and he likes law enforcement, which was also part of his duty before leaving the US Navy.”

He added, “My son wants to help people in his job as a law enforcement officer."

Tautai is a 2005 graduate of Fa’asao Marist High School where he was voted by his class as Outstanding Student of the Year, receiving the HTC Olo Letuli Award.

After high school, he attended the American Samoa Community College for a year before joining the US Navy as Master at Arms in November 2006. From 2006 to 2008, he was stationed in Bahrain in the Middle East including an 8-month tour in Iraq. He was later assigned to Sasebo, Japan in 2009- 2011 — 2009 was the same year his mother “Pele” passed away.

Tautai opted to leave the US Navy after a 5-year contract and decided to stay home for about a year, according to Tamatoa. In 2012, Tautai  left home and enrolled at the University of Hawaii, Manoa, where he graduated in December 2015 with a bachelor's degree in political science.

He moved to Salinas, California to become a law enforcement officer with the hope of joining his brother-in-law Joseph “Joey” Willrodt at the Sheriff’s Office in Monterey County.

Last July, Tautai enrolled in the South Bay Regional Academy, an organization made up of a consortium of academies that teaches curriculums prescribed by POST (Peace Officer Standards Training), which are recognized statewide in California.