Denver's Domata Peko Sr. talks about growing up in Am Samoa 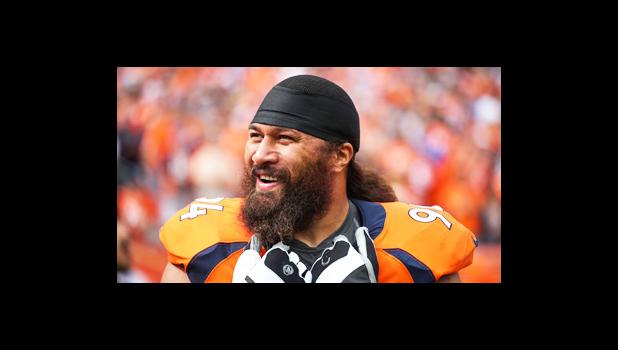 Veteran nose tackle Domata Peko Sr. has been both a passionate and positive force for the Broncos' defense. We caught up with him to ask him about his path to professional football and his youth growing up in American Samoa.

: Yeah, I was actually born in LA, and then in sixth grade, that's when I moved to Samoa. And from sixth grade until I graduated high school, I was in Samoa — American Samoa.

BS: What was the difference like when you moved there?

DP: It was super different, because in LA, I was in an LA lifestyle where it's fast-paced and everyone's in a rush [and] there's so much things to do. Going to American Samoa ... the speed limit's 20 miles per hour and the island's only 18 miles long. Our biggest building is three stories. It's going from skyscrapers to Gilligan's Island.

BS: What about the cultural difference?

DP: Well, in Samoa the culture — I thank God that I went to American Samoa when I was younger, because it really helped me learn my culture, and our culture is all about showing love to others, respecting your elders, treating others as you want to be treated and we're big on God — big Christians. We're big believers in God and it really helped me to trust in Him.

BS: In Samoa, what would you do during the summer or on a day off as a kid?

DP: Most of the time we were hanging on the beach. That's what everyone does. We just chill out on the beach, do a little body-boarding, hang out and if we're not in the water swimming and stuff like that, we're fishing. Fishing is huge out in Samoa. People out there, we just live off the land. You don't really need money. You just pick stuff off the trees and live off the land. It's really cool.

BS: How'd you get into football?

DP: Here's what happened: I was playing like junior pee-wee and stuff in LA, then I moved to American Samoa. I just stopped playing. I quit playing football until my senior year of high school, then I started again. My dad started a church and I was really involved in it. That's where I learned to play all these instruments. I have a guitar, I play drums and the bass. I was really into church, but I didn't have much time for football, but my senior year, I just felt something in my heart. I felt something from God saying, 'Hey, man, why don't you just try to play football?' And I went out there and I just felt, like, a God-given talent, like I had something, you know? I just felt like I could play football really well, and that's how I got into football.

BS: And you moved back to America when you were done with high school?

DP: Yeah. I only played one year in high school in America Samoa my senior year. I didn't get a scholarship; I had to go to a junior college. So from Samoa, I went to JuCo [junior college] in California and then I played two years there and that's when I got a full scholarship to Michigan State.

BS: When you were living in Samoa, did you ever come back to the States to visit or anything?

DP: Nah. Once I moved in sixth grade, I was in Samoa.

BS: So what was the experience like when you moved back to the States?

DP: It was different, man. Everything was so fast. It was back to that LA upbeat lifestyle. But coming back, when I came back to LA from Samoa, I came back with a different mindset. I was like, 'Man, I want to play football for a living.' So I really came back with a worker's mentality, that I want to go to JuCo, try to get a scholarship and try to make it to the NFL.