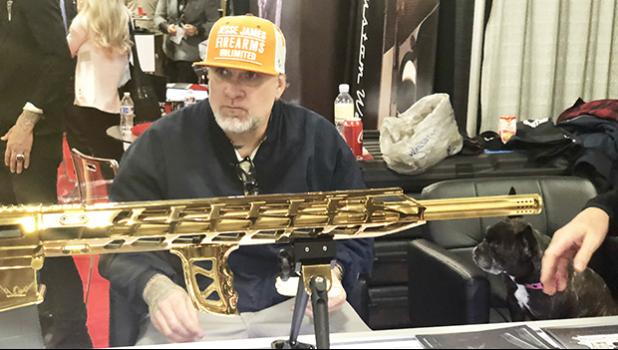 Jesse James is a revolutionary designer, TV celebrity, who has had a major influence in the world of custom motorcycles, knives and firearms (his .308 AR featured in the above photo). But maybe it was his friendly local Samoans that had an influence on him first.

Jesse was an Outside Linebacker football star who hurt his recruitment by the mild indiscretion of getting tossed into jail around recruitment time.

So: Jesse grew up knowing heaps of Samoans at Long Beach, California’s Millikan High School and played for Riverside Community College where he hung with a few Tuiasosopo’s.

It’s nice when you meet such a superb down to earth genius that has had a positive experience with Samoans... and could possibly help talented Samoan youth.

Cool Stuff has seen incredible artwork by Samoans who have never had more than basic primary school art classes.

Terry Tautolo is a natural born artistic genius who I would love to see mentored by Jesse. Talent without guidance to earn a living is an unfulfilled promise. Such a waste.

Maybe Terry, Jesse, and Cool Stuff can do a road trip to both Samoas, meet you Coolios … and look to help some of your talented Coolio kids.