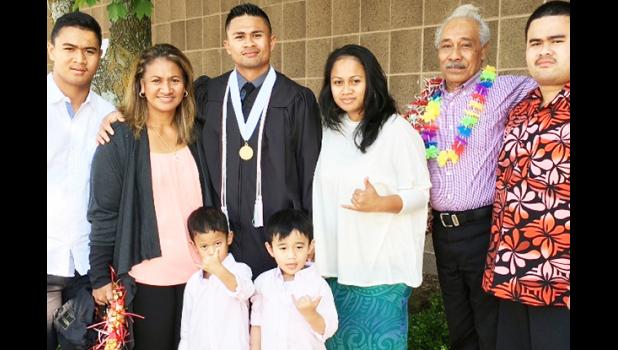 He is the son of Lelogoa and the late Cpt. Moleli Tavai of Aua and Laulii.

The 2013 graduate of Fagaitua High School left the territory in pursuit of higher learning at Wentworth Military Academy in Missouri where he received his Associates of Arts and Science degree, was awarded and recognized as a distinguished military student, and was commissioned as a 2nd Lieutenant in the United States Army.

Afterwards, Tavai attended the University of Central Missouri where he was inducted into the mathematics national honor society 'Kappa Mu Epsilon', and attended various mathematics conventions/conferences before graduating last week.

Lauivaa Tavai dedicates his accomplishments in honor of his late father Moleli Tavai, and extends his sincerest gratitude to his family, friends, and professors for their endless support and guidance throughout this journey.

For now, Tavai is preparing himself for the Field Artillery Basic Officer Leadership Course (FABOLC) at Fort Sill, Oklahoma and will be serving on active duty status in the United States Army.

He is pictured with his proud mother Lelogoa, his brothers Mika and George, nephews Moleli and Tiagogo, sister Crystle, and grandpa Mika who made the journey all the way from American Samoa to witness the celebration.

Congratulations Lauivaa Chanel Tavai and best of luck to you!