Coach on the rise 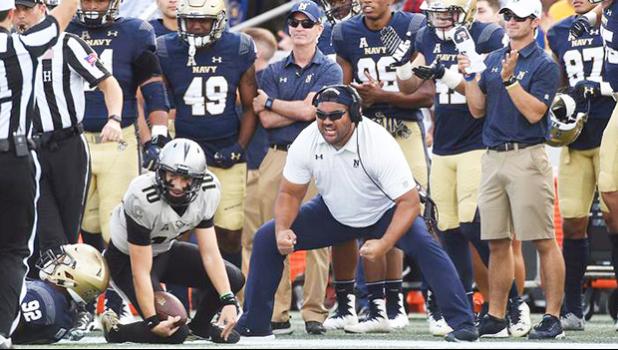 Shaun Nua can be gruff, tough and demanding out on the practice field. At 6-foot-5 and almost 300 pounds, Navy’s defensive line coach can be downright intimidating.

During the most recent episode of Showtime’s “A Season With,” there was a scene in which Nua – hunched over, hands on knees, hat backwards – was barking instructions at his troops.

“When you see a giant Samoan standing in front of you and know that he played in the league, there is an immediate respect,” former Navy defensive end Amos Mason said. “Coach Nua pushed me hard to reach my full potential. I always tried to give maximum effort, both in practice and games, because I didn’t want to let him down.”

Off the field, Nua is like an older brother or father figure for all of Navy’s defensive linemen. The sixth-year assistant takes time to ask his players about their families and lives.

“Coach Nua is a very personable, very loving guy. That’s the first thing he preaches to the defensive line, that we’re like family,” Mason said. “Coach Nua cares about you as a person more than as a football player. He wants to develop you as a man.”

Nua, who starred at Brigham Young University and played professionally with the Pittsburgh Steelers, has consistently built a solid defensive line during his time at Navy. He has developed several outstanding players, notably Mason and fellow end Will Anthony along with nose guard Bernie Sarra.

“Shaun has done a tremendous job with the D line. He is a great coach and mentor,” Navy head coach Ken Niumatalolo said. “Coach Nua is hard on his kids, but loves them. I think he strikes a great balance between being loving toward players and being demanding when he needs to be.”

Sarra worked alongside Nua while serving as a graduate assistant with the football program during the 2016 season, helping him break down film and tutor the defensive linemen. Sarra, probably the finest nose guard Navy’s had since switching to a 3-4 defensive alignment, has the utmost respect for his former coach.

Nua was born in Pago Pago. He was the second oldest of six children born to Sao and Usu Nua, a farmer and nurse, respectively.

Nua was actually raised by his mother’s grandparents – Tualemoso and Katerina Ahsoon – on the nearby island of Manu’a, which is located 60 miles away (a six-hour boat ride) from Pago Pago. Almost all of Nua’s relatives were farmers and fishermen.

Nua was a promising football prospect drawing Division I interest when he suffered a devastating knee injury during preseason practice his senior season. Medical care on American Samoa was rather primitive at the time and Nua had a leg that contained a torn anterior cruciate ligament put in a cast, which is probably the worst thing that can be done.

Sao Nua, who represents Manu’a as a sitting senator within the government of American Samoa, was certain his son’s dream of playing college football was over. Shaun Nua had never been an exemplary student and his grades suffered senior year because of the knee injury.

Nua appeared destined to a life spent toiling in the family businesses of farming and fishing after graduating from Tafuna High. It was older sister Sandy, who was attending college at Arizona State at the time, who changed that outlook.

“Sandy was the trailblazer, the first one to go away to college in the United States. She yanked me out of the islands,” Nua said. “I’m very thankful to my sister for what she did. I owe her everything. I am also glad my father had the humility to trust my sister and let me go.”