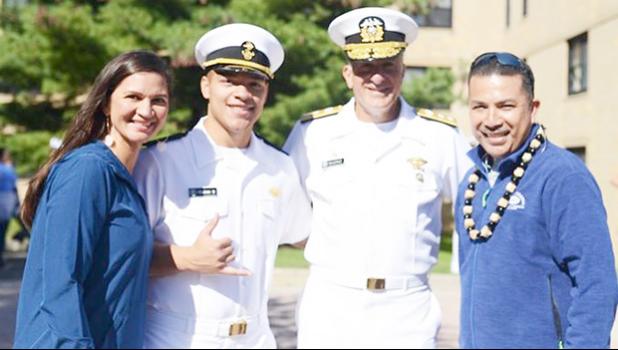 Kings Point, NEW YORK — Manaiaisiva Fruean III of Pago Pago and Fagasa was ‘pinned’ by his mother Laurie Stevenson this past weekend, in a ceremony officially making him a PLEBE of the United States Merchant Marine Academy (USMMA) Class of 2023. For the next four years, Manaia, now a naval reserve officer, will be attending classes, majoring in engineering and logistics, and shipyard management.

The USMMA, one of the five United States service academies, is located in Kings Point, New York. It is charged with training officers for the US Merchant Marine, branches of the military, and the transportation industry

Manaia, the oldest of four boys, is pictured with his parents, Manaia and Laurie, and Rear Admiral Buono, the superintendent of the USMMA, following the ‘pinning’ ceremony.