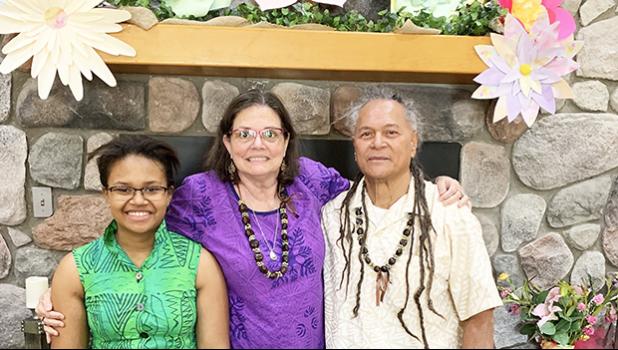 Petoskey, MICHIGAN —  A former student of American Samoa’s private educational system is doing very well academically in Petoskey, Michigan.  Punipuao Vitolio moved with her parents, Nafanua Jennifer Joneson, an attorney, and Falaniko Vitolio, a journalist in 2013 when she was seven years old and settled in the city of Petoskey in the upper north peninsular of Michigan where Joneson grew up.

She started her education at the Catholic Montessori preschool in Tafuna, and then moved to South Pacific Academy.  Later, she attended the now closed Ta’iala School in Tafeta.

In Petoskey, she enrolled at the Concord Academy then went to Shay Elementary.  Puni attended Ottawa Elementary and has since spent two years at Petoskey Middle School.

Our daughter, Punipuao Vitolio received seven awards, the most by any student in her class.  As her parents, Jennifer and I are very proud, and honored by her dedication, hard work, perseverance, and determination.

At this time last year, our family was going through emotional and physical stress as Jennifer spent 10 months, 200 miles away from Puni and her dad in rehabilitation centers in Grand Rapids fighting for her life and recovering slowly from a near fatal car accident.  Puni missed a lot of school days then but she vowed and promised her mom and dad that she would bounce back.

I remember Puni telling her mom while Nafanua was in the McLaren Hospital ICU and in a coma like state that she wished she could carry some of her broken bones inside her.  She was with her mom when the accident happened but miraculously she survived with minor bruises.

Punipuao has turned agony and suffering we had experienced for a very long time into a shivering sensation and emotional excitement.

Punipuao has welded together her mom Nafanua Jennifer Joneson’s bone fragments into an ula of majestic beauty that represents humble beginnings, peaceful reconciliation, happy resolution, and hope.  She then laid it on Jennifer’s neck washing away the pain and suffering and restoring the will to fight for God’s gift of life.

But her demeanor remains as a down to earth young and developing young Samoan girl.  Her art teacher, Mrs. Mazzoline spoke highly and glowingly about Punipuao’s character during the ceremony when she gave out one of her seven awards, the Promising Young Actor Award.

“This particular person is what you call in the theatre world a “Triple Threat”.  That means that this actor not only can act, but sing and dance.  Most actors are intimidated by triple threat, but this actor is humble, kind and encouraging.”

Mrs. Mazzoline said she “absolutely loved watching this actor grow, develop and hone the acting skills needed for the stage”.

“This actor not only is accomplished in theatre, but in the performing and visual arts as well.  You can tell how much this person LOVES the art in general, and gets involved to continue learning and growing.  It is our hope that she will continue learning, growing and sharing the love of the arts with others”.

Miss Punipuao’s success has given us joy and peace.  We share her accomplishments with you all.  Nafanua, Punipuao and I would like to thank our aiga, friends and readers of the popular Samoa News for your support, prayers and well wishes during our darkest days.

Puni was also awarded a scholarship to study music for three months.  She performed with her music teacher and other students last Sunday at the Crooked Tree in Petoskey, singing, “When I was your man” by Bruno Mars, a Hawaiian super star.