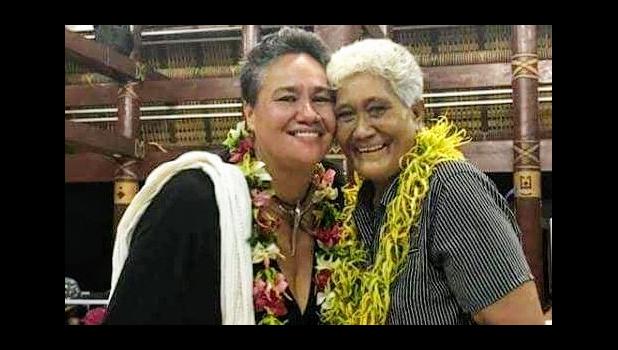 Apia, SAMOA — Her extraordinary poetry won Sia Figiel the Polynesian Literary Competition in 1994. Then in 1997, her book “Where We Once Belonged” exploded onto the scene and earned her the Commonwealth Writer's Prize for Best First Book for the South East Asia - South Pacific region. She was the first Pacific Island writer to win the prestigious prize.

Sia Figiel has been on the cutting edge of contemporary writing in Oceania for the last two decades, and so it was fitting that her latest work was met with both anticipation and applause by those who have come to know her candid voice, and who have relished her thought-provoking stories as welcome and refreshing additions to Pacific literature.

Earlier this month, Sia officially launched her latest book “Freelove” in her native Samoa, where the promo material called her work “highly acclaimed for its innovative fusion of traditional and contemporary modes of storytelling.”

Sia has been widely lauded for her fearless exploration of sexuality and taboo themes, perhaps at times raising eyebrows (and blood pressures) along with an awareness of what it means to be female in the traditional cultures of Polynesia in the 21st century.

According to Dr. Vanya Taule’alo, Vice President of the Samoa Arts Council, the launch of ‘Freelove” was a great success and “it was a privilege to have Sia talk about her book and read passages for the audience.”

Dr. Taule’alo said that such events do not happen very frequently in Samoa, “making this evening very memorable for those of us who yearn for such personal connections with artists and creative people.”

She explained that Sia had contacted her in her capacity as Vice President of the Samoa Arts Council (SAC) in 2017 —where she pledged to offer 100% of the proceeds from the sale of the US version of her novel, originally published by fellow Pacific writer, Dr. Robert Barclay of Lo’ihi Press,  to the development of the SAC.

At the launch which took place on Wednesday, July 18 at the National University of Samoa’s Fale Samoa, Dr. Taule’alo reported that Sia gave her $800SAT, which represented the sales of “Freelove” over the previous week.

The Vice President of SAC reported, “These funds have been given to the SAC Treasurer Clare Leota and put in our bank account at the Samoa Commercial Bank.”

Her grateful heart was expressed when she added, “I feel very humbled that Sia is making this generous gesture on behalf of the arts in Samoa and I know that as we collaborate more in the future we will make excellent use of her kind donations.”

Sia told this reporter, "It’s about giving back. I realize its not a dent in comparison to what I have received in the last 25 years. But it's a small expression of my gratitude to everyone who has helped me as a young struggling writer.”

At the same event, Sia had a very special guest in the audience. Her English teacher, Sister Vitolia Mo’a (a respected Samoan and Pacific scholar in her own rite) was there to cheer her on, and enjoy the warm glow of Sia Figiel’s success.

After the event, Sia sat down and penned a note to her teacher expressing her gratitude, where she told Sister Vitolia, “It was a privilege having your presence at the launch of Freelove. I was overcome with emotion seeing you. Humbled and grateful beyond words. Thank you again for instilling in my classmates and me a love of language and a fascination for 'the other'...people, cultures, in essence, the world beyond our reefs. Your seminal influence on me as a writer grows with each book and I acknowledge it, always”.

Sia closed her letter with, “Discipulus in sempiturnum. Ia manuia pea oe,” as an homage to Sister Vitolia, who also taught her the Latin roots of words.

In response, her teacher wrote,

When a pupil finally puts her teacher at the back bench or at the corner of the classroom the only response is: Viia le Atua! O se faaeaea taua lea mo le faiaoga - she must have done something right! But, it's not all about the teacher; it's about the seeds for greatness inside each person who gives me/us (teachers) the privilege and joy to water, even at times, buckets of it!

You have made us all proud. And this loomatua is so full of it and filled with joy at the development and successes of all of you, who without your knowing, entrusted your young lives to our educational care.”

Her teacher noted that she was also happy to see that Sia had come home to Samoa. She told her famous student, “Yes, we are, all of us, students for life for the search for meaning, beauty, truth and goodness stops at the entry into another life form.”

Reaching back into her list of influential mentors, Sia dedicated this book to the Pacific’s eminent writer, Maualaivao Professor Albert Wendt. Sia told Samoa News that Maualaivao not only inspired Sia and her generation but has travelled extensively with her to readings and Pacific conferences in Europe, Hawaii, Fiji, New Zealand and Samoa.

She noted that she is also deeply grateful to NUS Instructor Ms. Dionne Fonoti and Little Island Press NZ publisher Evotia Tamua for their phenomenal efforts in organizing the launch.

“Dionne and Evo were able to bring a village together; academics, students, artists, journalists, community members and Seiuli Vaifou Aloalii-Temese who gave the prayer and blessings for the event.”

Sia also acknowledged her gratitude to Dr. Safua Akeli Amaama,Director for The Centre of Samoan Studies at the National University of Samoa for introducing her and for supporting the launch of her book.