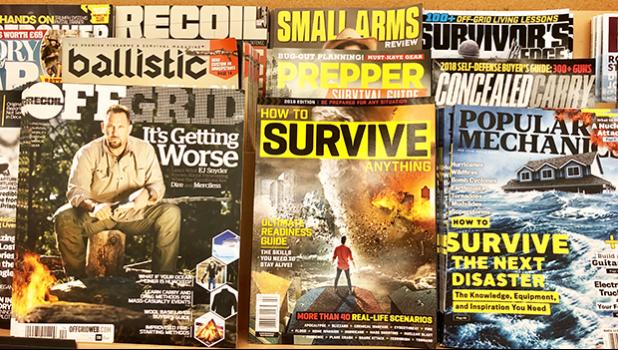 Wayne Moors weed eater, gift shop, magazine store was always my first 1980s Pago visit... even before stops at Tepatasi (not Tumua Palace), The Bowling Alley, the Rainmaker Hotel Bar, and Evalani’s. Wayne & Mrs. Moors still rock in Nuuuli, but the impact on me then, the Savaii FOB with no TV no vids, was definitely more intense.

In Hawai’i, recently back from our Cyclone Gita drama, I visited our local supermarket only to be blown away by the heaps of disaster survival magazines.  How/why did these pop up?  Are publishers seeing an economic opportunity in our wide spread national fear of natural and manmade disasters? Is it that smart phones and social media provide better coverage than we had in the old days... thus heightened awareness and fear?

Along these lines I was also sincerely impressed by a New Zealand (2008) TV disaster movie called “Aftershock”. This movie was so realistic that the NZ government had to continually warn viewers during broadcasts, that Wellington was still the Capitol and that an 8.2 earthquake and tidal wave did not kill 20,000 (Orson Welles’ War of the Worlds radio broadcast revisited).

“Aftershock” was such a well-researched, well written movie Cool Stuff whole heartedly suggests that American Samoa’s Governor, Lt Governor, Directors and Deputy Directors watch it together, take notes and brainstorm if the film presents any valuable concepts to be implemented in the Territory’s proactive planning.

Since the Territory’s Hon. Congresswoman is now good mates with the NZ Government, she could probably get a Kiwi to pop up a DVD next week. Aftershock is so thought provoking every Coolio should do a family viewing, with ample servings of Aveina Store popcorn... cheap & yummy.

Cool Stuff failed horribly in one aspect of Cyclone Gita. While I borrowed a portable weather radio that also featured am/fm, I did not have shortwave. Staying with family in the Eastside, we all lost local radio early on... and a lot of valuable updates the stations are committed to providing.

Radio NZ and Radio Australia are the ‘go to’ back up on air resources when our 2AP’s lose antenna towers or electrical power. I foolishly left my shortwave portables in Tulaele, Apia and in Hawai’i.

Icom makes the absolute best tiny compact shortwave portables (the size of a candy bar or a pack of smokes). Cool Stuff did Cyclone Ofa & Val with an Icom R-1... now we are up to an IC-R6 (with discounted prices averaging $169... better and cheaper than the $300 R-1 back in 1990).

My Tulaele, Apia home has a $24 tala (yup WST) portable shortwave radio I bought from a Chinese owned local Apia store. My medium sized portable cheapy is mainly to listen to cousin Corey Keil’s Radio Polynesia’s classic rock... but it will step up for NZ/Oz shortwave reception when the pisupo hits the fan.

Your kids will blah blah blah, how the Internet can do it all... but with no power, no Internet... a voice via old fashion imperfect shortwave radio is a wonderful comfort.

Cool Stuff reached out to Larry Fuss and Joey Cummings at KHJ to inquire how they will deal in the future with the issues they faced with Cyclone Gita. Their answers were far better than my ideas... so wait for some potential future good news direct from them and your favorite US federal government (as KHJ is a designated emergency broadcaster).

Great public/private territorial teamwork overall. Yes, some hiccups, but progress and chilled Vailima seem to be normalizing matters so we can all get ready for the next big one.