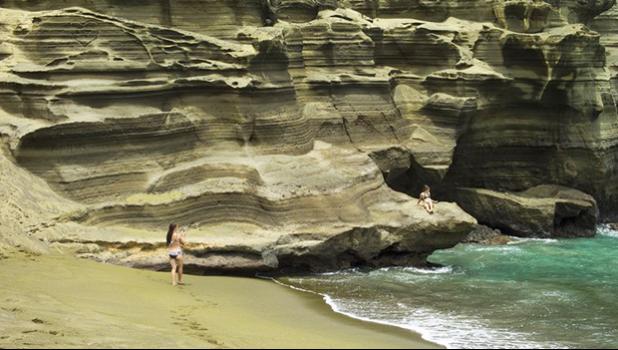 NOT REAL: Hawaii’s Kilaueu Volcano Is Literally Raining Gemstones, And We Want Some

THE FACTS: The ongoing eruption of the Kilauea volcano in Hawaii is not causing crystals to rain from the sky despite reports of residents finding little green gems in the area. Reports of the phenomena by science-related websites and some newspapers and magazines relied heavily on a tweet by Erin Jordan, who told the AP that green stones — identified as olivine — were found by friends who live in Kalapana, Hawaii, about 12 miles (19 kilometers) from neighborhoods where lava fissures have opened since early May. Olivine is a common mineral found embedded in Hawaiian lava, said Cheryl Gansecki, a geologist at the University of Hawaii’s Hilo campus on the Big Island. But, she said, “there is not olivine raining from the sky, except in clumps of lava.” She added they do not separate from the lava by themselves.

NOT REAL: Obama Separated Families Too -- Over 90,000 Children Placed Into Sponsor Care

THE FACTS: President Barack Obama did not oversee the separation of 90,000 migrant children and their parents at the U.S. border, contrary to a misleading online report and claims circulating on social media. The claim, published on a conservative website, was repeated on social media throughout the week as President Donald Trump faced criticism over his administration’s “zero tolerance” immigration policy, which has left more than 2,300 children separated from their parents at the border since May. The false claim appears to stem from a January 2016 Senate subcommittee report that found from October 2013 through 2015 the Obama administration placed nearly 90,000 children with a sponsor, after they were detained at the border without a legal guardian. Homeland Security Secretary Kirstjen Nielsen said while the Obama administration and that of President George W. Bush separated some families at the border, they did so at a lesser rate than Trump. According to both Nielsen and a former Obama official, children were only split from their family under Obama if the adult was suspected of not being a guardian, had an outstanding warrant, or federal agents suspected the adult of another serious crime like trafficking or smuggling.

THE FACTS: Convicted Boston Marathon bomber Dzhokhar Tsarnaev (joh-HAHR’ tsahr-NEYE’-ehv) has not been beaten by a white supremacist gang while in prison despite a recurring online report that says he was severely injured in an attack. The report posted June 18 by the website Read Me Every Day relied word-for-word on a report that circulated online soon after Tsarnaev’s trial and sentencing in 2015. According to the reports, Tsarnaev slipped on a discarded banana peel, hit his head on the floor, and suffered “massive brain trauma,” but it was later determined he had been beaten. The story dates to at least August 2015 when it appeared on empirenews.net, a website known for parody and satire. The Bureau of Prisons in an emailed statement said while it does not share inmate health information “we can tell you that there is no evidence of a situation” as described in the report.