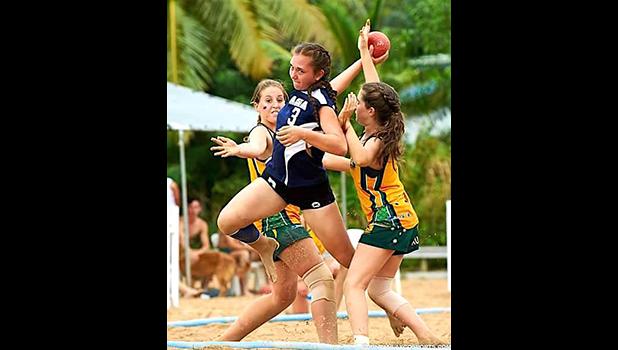 Stephanie, along with her twin sister Danielle are founding members of American Samoa Handball along with their coach and father Carl Sagapolutele Floor.

The American Samoa U17 National Woman's Beach Handball Team won the gold medal during the 2017 U17 Oceania Beach Handball Championships last May at Cook Islands. During the tournament, Stephanie, with the help of her teammates over powered their opponents for a total goal count of 127 points over 5 games. Australia, who placed second, had a total goal count of 91 points.

Stephanie scored roughly half of the team points at 63, assisted by Danielle, Fiapai Fanene and Naomi Aasa.

The nearest scorer was Caitlin Oschadlues of Australia with 43.

In addition to playing the Specialist Position, Stephanie is the team’s primary goalkeeper.

In Beach Handball, the goalkeeper plays offense after a goal or a blocked shot, or may be substituted by an offensive Specialist. The Specialist scores 2 points for any shot unlike. The wing or pivot position players are awarded 1 point for a normal shot and 2 for an acrobatic shot determined by the referees.

Stephanie alternated every play with rising star Jasmine Liu, who at 15 was the youngest player on the team scoring 27 points of her own. Stephanie blocked over 35 shots and with the help of the defense, Frances Nautu, Imeleta Mata'utia, Danielle Floor and Tara Mageo held Kiribati scoreless for an entire half 17 - 0, held Cook Islands to a total of 13 points and allowed only 4 points for the entire championship game against Australia.

Oceania was granted two placements as the tournament served as a Qualifier for the 2018 Youth Olympics this August, at Buenos Aires, Argentina.

"We had two missions, learn from the other teams so that we could beat Australia again,” coach Floor said.

The team did just that as they nearly forced overtime against Venezuela, beat African representatives Mauritius and after beating Australia earlier in the competition, beat them again in an exciting overtime shootout.

Teamwork again showed its face as the offense set screens and pics while the Aussies defense keyed on Stephanie.

Stephanie drew in the defense, which opened scoring opportunities for her sister Danielle, who scored 9 of the teams 10 first half points in the YOG qualifying game.

After scoring 6 points in the second half Stephanie again drew the defense while feeding Roselyn Faleo and or Naomi Aasa for the win to force an overtime shoot-out, as the Aussies won the first half 11-10.

In the overtime shoot-out, Stephanie made three key one-on-one blocks while making perfect passes to her four team mates who all scored a point. She then switched to shooter while Jasmine Liu entered the goalkeeper spot.

Leading 5- 4 with one shot left from each team Stephanie ran the sideline, which drew the goalkeeper out to defend. Jasmine gambled trying to shoot goal to goal for a 2-point shot but missed just slightly to the right. Australia's last shooter took 4 steps negating her shot, thus securing the YOG Qualification win for American Samoa.

In total, Stephanie made over 45 blocks and scored 42 points in the 9 games at Mauritius leading her team.

Stephanie Floor of Handball, Adriana Puni of Vollyball and Ana Ludgate of Wrestling rounded out the top three nominees for the 2017 Top U17 Female Athlete of the year. No stats were provided.

"This is not my trophy. This is our trophy. Handball is a team game and without you girls, I could never win this," Stephanie said when accepting her award. "I want to thank our sponsors, our coaches and our parents because we're going to the Youth Olympics."

"On behalf of ASHAA I wish congratulate the winners and thank everyone who supports handball and who nominated any of our athletes, coaches or federation," Floor Sr. said. "The girls were a bit disappointed when they didn't win 2017 Top Team but when Stephanie won her award, and after hearing her acceptance speech they vowed to continue supporting each other in their quest for the gold. It’s competition results that we are after.”

ASHAA National Beach Handball Court is almost complete at the Night Hawk's Maliu Mai Beach Resort at Fagagogo. Training continues for the YOG Team with strength and conditioning coach Clayton Boom Mahuka three days a week at the Sports Complex in Tafuna while Saturdays are reserved for Beach Handball training.

Saturdays are open for girls 12 to 16 who would like to learn from the experienced and now U18 Team in preparation for next year’s U17 Woman's Beach Handball Championships. Training and games are at the Night Hawk Maliu Mai Beach resort at 2:30 p.m.

"We have been invited to Romania and Hungary to train and compete this July. I hope we can pull it off because there's no substitute for experience. I want our girls prepared properly and ready to represent our territory on the podium, not the stands," the coach said.

Stephanie is a senior at Leone High School holding a 3.9 GPA. She is a member of the Leone Green Club, the Leone Close up Club and the National Honor Society.

She played varsity soccer this year in her first break, after 4 full years of handball training. Stephanie enjoys working out, is a multi instrumentalist and lists fishing with her dad as one of her favorite activities. "I out fish my dad all the time," she said.

She plays handball for CaBoom Athletic Club of Iliili.

Stephanie, a resident of Iliili comes from a long line of family athletes. Her Sagapolutele Family had professional football players, professional golfers and numerous local HS football and basketball stars. Her brother Sean is a three time All American Wrestler and her brother CJ is a 2005 USA National Champion, a two-time All American and after placing second in 2014, at the Africa Wrestling Championships, provided American Samoa a qualification spot at the 2012 London Olympics. Prior to moving to American Samoa Stephanie was an excellent wrestler winning several local wrestling tournaments in the boys division.

Stephanie is the Grand Daughter of Latea Sagapolutele Floor and the late William E. Floor. Her mother Patricia succumbed to breast cancer when she was 5 years old. Stephanie plans on attending ASCC while she continues to play handball for ASA. She has her sights on a career in Europe as a professional player and internationally as a referee with her twin.