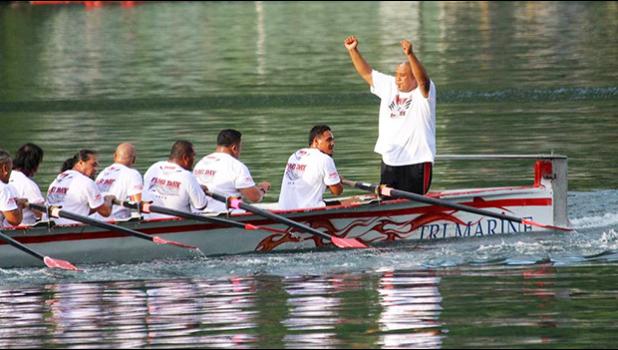 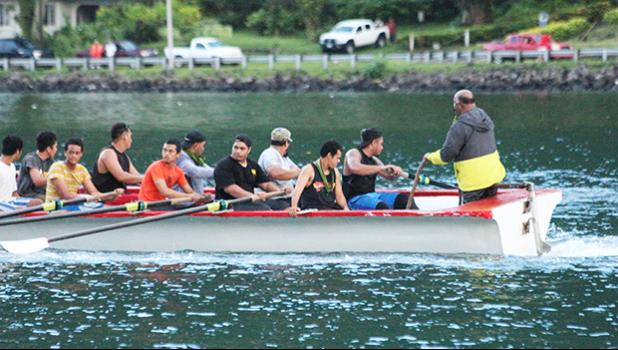 The reigning champions of ‘faigamea i le tai’ are prepared to defend their title
By
Tony Gasu
tony@samoanews.com

The Manulele Tausala I and II fautasi captains & crews from the village of Nu’uuli, Ituau Malosi district are prepared to compete in the 2017 Flag Day Fautasi Regatta, not only to defend their championship title from last year’s competition, but are focused on the top seed of the ‘faiga mea i le tai’ — to earn another chance at being the No.1 team in this year’s fautasi fiva competition.

Samoa News spoke to the skipper of the Manulele Tausala I, Manutafea Saleauau Tanielu Taufete’e, who captained the winning fautasi from Nu’uuli last year — he’s won four titles since taking the helm following the passing of Ben Solaita, the iconic captain and coach of the Nuuuli fautasi legacy.

Captain of the Manulele Tausala II is Fanene Vitale Sotoa. Manutafea spoke for both auva’a and the village of Nuuuli about their preparations and aspirations for the 2017 Flag Day Fautasi Regatta.

He said that they’re focused on “being number one – I believe that this is the aim and focus of all the other competing fautasi crews in the race, and I know that no one is focused beyond that.”

Manutafea said,“From what I see out there during rowing practice with the other crews, everyone is looking good and getting better, and I believe that this year will be a competitive race with the high morale and spirit that the other crews have been showing.”

He noted, “The preparations of the Taumafaalofi and the aumaga are the usual preparations as always, there’s nothing new to the way that we prepare for the ‘faigamea i le tai’ every year — Manulele Tausalas are prepared to honor and be a part of the celebration of Manu’a and Tutuila’s flag raising ceremony for this year.”

According to Manutafea, their crew has been in preparations since mid February. “We started out slow with our training on the side of the road – running and walking, at the same time we were trying to gather the aumaga and the youth from the village to form up our usual fautasi crews, and as always, everything fell into place within its usual time span. As of now, we’ve been doing our usual methods of training — utilizing both our land and sea combination of workout for the aumaga.”

He said, “I can assure you that we haven’t changed anything or added anything new to our preparations. We are doing the usual Manulele Tausala schedule of trainings because it doesn’t matter how much you put into your preparations leading up to the race — the main goal of it all is for our auva’a to have enough stamina, strength, and fitness to go all the way. O le lava o le manava o le mea pito sili lea ona taua i tapenapenaga o le Manulele Tauasala i tausaga uma – it doesn’t matter how smart or experienced the captain is, but if the crews aren’t physically fit, they can try as much as they can, but the main goal will be unattainable.”

Manutafea told Samoa News that the trainers who are dealing with putting their crew to the test are all military members of the US Armed Forces. He said, “O le tofa ia Tauese Apelu So’oa’emalelagi is the one leading the conditioning part of our training. Alongside Tauese are other military members like Ufutele Louis Solaita, Sauni Tuitoelau, Ave’ese’ese Maugalei, as well as last, but not the least, our Representative le tofa ia Manumaua Wayne Wilson.”

He pointed out, “They are the ones that we’ve put our faith and our belief in …to getting the boys physically in shape for the ‘faiga mea i le tai’.

Manutafea did note, “The only change to our crew this year is the absence of some of our auva’a members who’ve joined the Armed Forces and have moved off-island to be stationed. Not only the military, some of them as well have traveled off-island for collegiate opportunities and educational purposes.”

He said, “But this village has a lot of youth who are continuously coming up. At the same time, we also have experienced rowers who were on the crew throughout the past years, but couldn’t row during the recent races due to family and work obligations, and now they’re back to earn a spot on the Manulele Tausala I and II fautasi’s.”

Rumor has it that the Manulele Tausala I fautasi is the ‘oldest’ fautasi competing in this year’s flag day fautasi race – and it was confirmed by skipper Manutafea. He said, “It is true – this is the oldest fautasi still competing within the faiga mea i le tai – it has history to it, as well as its problems, but it’s the strength of my auva’a that has kept this vessel alive and running.”

According to Manutafea, the Manulele Tausala I was built in 1993 and made it’s debut appearance in the faiga mea i le tai in 1994. He said, “The boat itself is over 20 years old – it sank twice throughout the past years of fautasi racing, but to ‘God be the Glory’ that we’re still able to use it, we have a lot of pride in this vessel.”

Manutafea adds to Nuuuli’s legacy of fautasi racing by not only having 5 years at the helm of Manulele Tausala I, but before that he was a “part of this sport for a very long time – I started rowing since 1984 all the way up to the year 2004, that was my last year to hold an oar and be a crew member within the sport … I rowed for 20 years, but back then, our Sa was named the Satani.”

Reflecting on his current role as a captain of one of Nuuuli’s Sa, Manutafea told Samoa News “when I was chosen to be captain throughout the past years up to the present time – the task is a hard task, it’s not easy. Some nights I can’t sleep because I’m always thinking of methods and ways to improve my auva’a’s strength and fitness.”

He added, “I’m not sure about how the captains of the other boats feel about it, but to me — when I was chosen by our village, it has always been a burden and one of the hardest tasks I have faced.

“But it doesn’t matter how experienced I maybe or smart, God has always been guiding me and has been with me through it all to help me overcome the trials and tribulations that may stand in my way.”

“It’s one of the hardest things to let your whole village down, so it’s always and will forever be one of the biggest fears I have within me. But I believe that we’ve played our cards right from experience throughout the previous years, like I said before, there’s nothing new in our preparations.”

In conclusion, Manutafea told Samoa News, “Before I close, I would like to send out my most sincerest gratitude and thank you to my village of Nu’uuli – o lenei afioaga, o lo’o nofotatalo ina ia manuia le taumafaiga a Taumafaalofi ma le aumaga, e le gata i lea o tama fanau o lenei afioaga — where ever you may be around the world and are rooting and cheering for us, we feel your prayers and we will never forget you.”