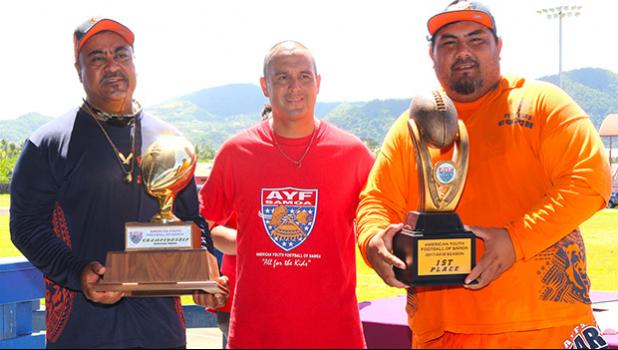 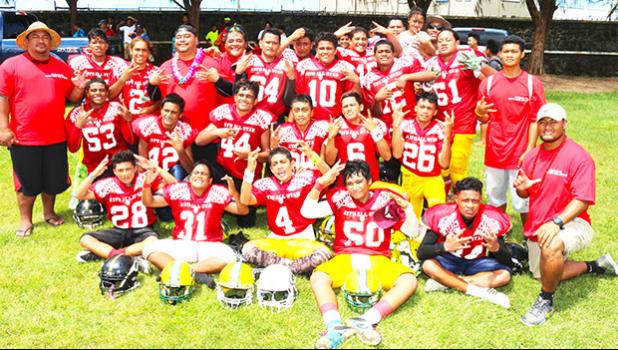 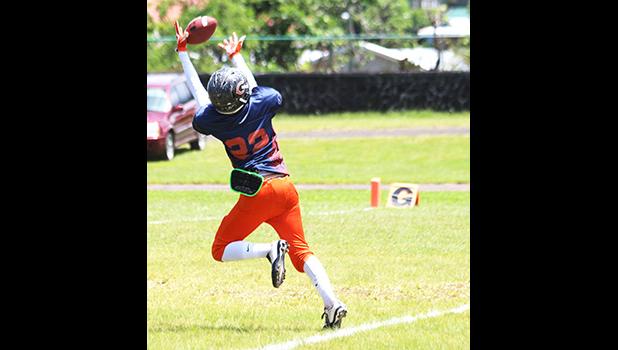 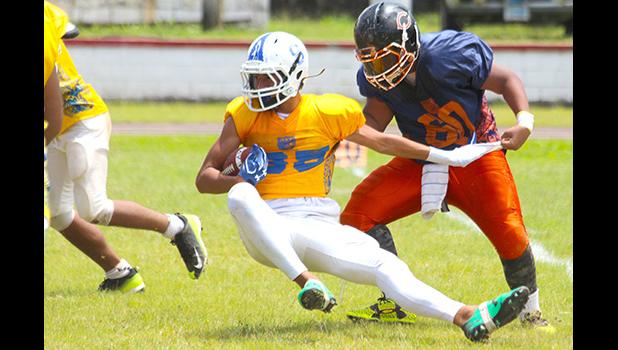 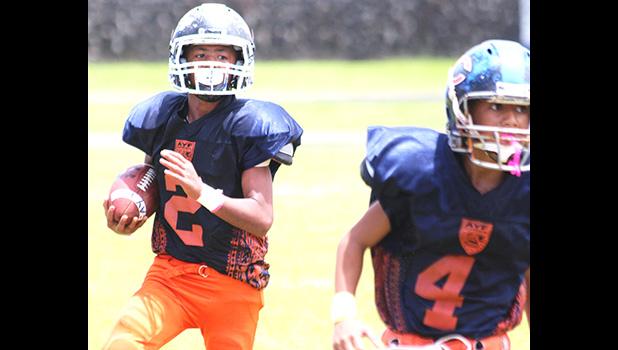 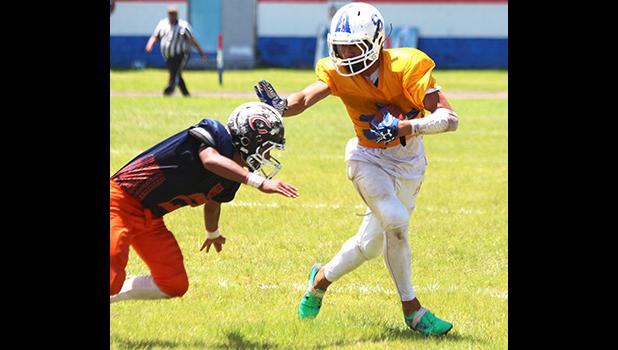 They are also Back-2-Back ‘Undefeated’ Champs
By
Tony Gasu
tony@samoanews.com

Pago Pago, AMERICAN SAMOA — In their 4th appearance in the biggest showdown of the 9th season of the American Youth Football of Samoa (AYFS), the AYFS Bears from Pago Pago, led by Head Coach Sa Suluai not only collected their third championship title last Saturday after a dominating 30-18 win over the Rams, they ended the season with an undefeated record for the second year in a row

During the closing ceremony that followed they game, AYFS President Victor Avalos thanked all the players, and everyone who supported the league.

“I want to say that I’m very proud of all the teams, all you parents who are here today, like I said before we’re all one family. We showed it out there on the field today after the championship game, we were out there taking pictures together”.

He continued “Don’t quit, not everything in life will go our way, but we can’t stop because we want to be good citizens for American Samoa, and that’s what you all are, and that’s what we’re setting you up to be."

“Without the coaches, without the parents support bringing the water, bringing the snacks, doing the mentoring. Setting everything up, from the field set-up, because the field doesn’t get painted by itself – those are some of the smallest of things that we have to be appreciative for because those are the things that we can’t have the league without. God has blessed AYFS for nine years and especially everyone here."

The AYFS Rams had a hard time on offense from the opening quarter of the game against the vicious Bears defense, as their starting quarterback Taiese Saofaigaalii and impact player Logologo Va’a didn’t field after they were ejected from the playoff game last weekend against the Packers, giving the Bears the upper hand to strike from every corner.

In the opening quarter, just after a stunning defensive start from the Rams, a turnover for the Rams offense to start their first offensive possession went in favor of the Bears.

6:37 into the first quarter, Rams third down at midfield, a pass from Vili Fano to Sam Mikaele was intercepted by Marcus Samia, and returned all the way back to the end zone for a 55-yard defensive touchdown for the Bears.

The two-point conversion was a quarterback keeper by Vaifanua Peko-Vai, which kicked it up a notch and had the Bears leading by eight.

When the Bears came onto the field for their second offensive possession of the game, it was a second down and ten from the Rams 30 yard line, and Peko-Vai dropped back to bomb a long one to Prodieus Lutu-Fuga who was wide open downfield, securing the catch and scoring the Bears second touchdown of the game with just 4:22 into the opening quarter.

The two point attempt was an inside hand off to Jared Lotulelei who broke tackles on his way to crossing the goal line to give the Bears 16 unanswered points.

7:34 in the second quarter, just after an interception by Misiona ‘Mission’ Fagapule, spotted the Bears a first down opportunity from the Rams 25 yard line. From there, Peko-Vai charged up a long pass to David Taulapapa who secured the catch and battled his way to cross the goal line right in front of sideline official Mafo’e Fuimaono who signaled the Bears third touchdown of the game.

The two-point conversion was a tuck and run by Peko-Vai which was good enough to expand their lead 24-0.

But the Rams refused to let up.

2:28 remaining in the first half and the Rams ‘Boom Bullet’ Sacrie Latu muscles his way through the middle for a 2 yard run for the Rams first touchdown of the game, bringing them within 18.

Just when the Rams started to hype things up after their first TD of the game, the Bears silenced them after a stunning pass play setup by Offensive Coordinator Keith Leuta.

42 seconds remaining in the second quarter and the Bears second down possession from the Rams 32 yard line was a long pass from Peko-Vai to Samia who secured the catch and stormed out to the end zone to score another touchdown for the Bears, extending their lead 30-6.

The two-point attempt was a pitch play out to Tony Jensen that was denied by Sam Mikaele behind the line of scrimmage.

During the second half of play, the Rams defensive game changed directions, as they proved to be one of the most fierce defensive units in the league, shutting out the Bears to absolutely no touchdowns throughout the second half, all the while their offense was slowly progressing for a comeback.

It wasn’t until the final quarter of the match that the Rams finally found their missing piece of the puzzle that started to get things going for them.

9:52 remaining in the ball game and the Rams were playing a third down possession from the Bears 30 yard line. Their new quarterback Miraculous Naiuli fired a long pass out to Sam Mikaele who secured the catch and stormed his way towards the end zone to score the Rams second touchdown of the game.

The Rams, who fought all the way down to the last minutes of the game, were awarded their third touchdown of the match late in the game.

3:24 remaining and the Bears, who went into shotgun formation for an obvious pass play, were shut down by the Rams' outstanding second half defense after Sam Mikaele laid the hammer on Peko-Vai and fumbled the ball in the backfield. The live ball was picked up by Sacrie Latu and returned all the way to the end zone for a 50-yard defensive touchdown.

Even though the Rams fired things up late in the game, it still wasn’t enough to claim victory over the undefeated reigning champions, the Bears who claimed their third league title after a 30-18 win.

See tomorrow's Samoa News issue for details on the Red and Blue All-Star battle in which the Red All-Star team won after a stunning 14-8 comeback victory.