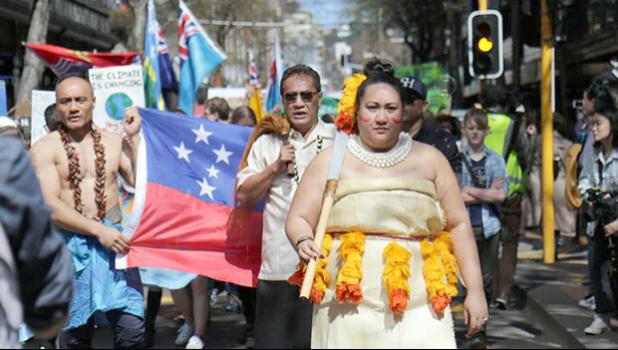 Wellington, NEW ZEALAND — Mary Moeono-Kolio was up past midnight on Thursday, painting banners and stapling flags to poles. Writing chants and rallying her community.

For two years now, she's been the coordinator of the Wellington branch of a group that call themselves the Pacific Climate Warriors, and Friday was going to be their biggest moment yet.

With the wave of student climate strikes sweeping around the world this week, Ms Moeono-Kolio's group was going to be at the front of the march to the steps of the New Zealand parliament, where students would deliver an 11,000-strong petition demanding the government do more to fight against climate change.

As she fielded dozens of calls and texts over a large latte early on Friday morning, Ms Moeono-Kolio said about 40 students had been preparing with her the previous night.

You could never trust Facebook event numbers, she said, but she expected more than that to show up to the actual march.

Outside the café, Civic Square - a large open brick-paved space, hemmed in by buildings condemned and abandoned as earthquake risks - was largely empty.

Just after 11am - an hour before the march to parliament was set to begin - the square was already full. In the warming spring sun, beneath a discomfiting sculpture of a giant hand, they gathered, many in school uniforms, many more waving placards, practising their chants.

Twenty minutes before the march was due to begin, the square was overflowing.

The chattering mass spilled into the surrounding streets, wrapped around the back of the abandoned library, into Harris Street and across the bridge to the waterfront.

Turns out, that was only the half of it.

Around the corner burst thousands more, who had marched down the hill from Victoria University under police escort.

Classes were off, the city's biggest university endorsing the climate strike. Many secondary schools had let their students out too, those that were still open probably sat half empty.

"I'm so amazed by this turnout," said Ms Moeono-Kolio as she tried to hustle the Pacific warriors at the front of the parade.

At midday, they were finally off.

"What do we want? CLIMATE JUSTICE! When do we want it? NOW!"

With their large "PACIFIC PAWA" banner, and their colourful lava lavas and leis, the Pacific Warriors led off to snake their way along Wellington's streets. They were singing, they were dancing, they were chanting.

"Hey hey. Ho ho. We're not drowning. We are fighting."

Tui Pilitati is a New Zealand-Samoan who felt the Pacific Islands - New Zealand's neighbours, and one of the country's biggest communities - had to be a key element of climate action. It was them who were threatened most, he said, and they had to be represented.

"They're not doing enough," he said of the New Zealand government. "You can just see by the thousands today that we want change and we want it now."

"We want climate justice now, and it's gonna start now," he said.

"I just don't wanna be part of a generation that does nothing, and what better way than marching the streets of Wellington singing the songs of our ancestors."

The throng of people stretched for nearly a kilometre, organisers said. As parliament came into sight, many more were still leaving Civic Square, yet to wend their way through the narrow streets.

As the sun bore down, placards turned into fans. But the chants grew louder as they made their way along Lambton Quay, the city's main street, a fortress of concrete and glass high-rises, the hub of business and the public service.

Along the curbs, and in the windows and balconies, the suits came to ogle. Some cheering, many filming, some looking bewildered. But the march went on.

Ulu Afaese was marching because he felt Pacific Island voices were not being heard in the climate debate. When Pacific Climate Warriors were invited to lead at the front of the march, he said that was the chance.

"I'm here to fight for our island back home," he said, as he pushed an amplifier along in a wheelbarrow.

"It's just unfair that the region that emits the least is the one that suffers from climate change the most."

Mr Afaese's comments at the climate strike came just a day after the latest report from the Intergovernmental Panel on Climate Change into the state of the oceans, and the profound risk posed by climate change to low-lying islands and atolls.

It concluded that climate change is heating the oceans and altering their chemistry so dramatically that seafood supplies are threatened, and stronger cyclones are being whipped up more frequently. Floods that used to happen once-in-a-decade could become annual events, it said.

These patterns are already being seen in Pacific islands but are forecast to worsen without dramatic cuts to greenhouse gas emissions.

One of the most threatened places are the atolls of Tokelau, a New Zealand territory in the central Pacific. At the march, a Tokelauan student, who asked not to be named, demanded action.

"It's important for us to march and ask for this as a New Zealand colony," she said.

"We want to say to Jacinda Ardern, do something. Stand up for us. You come to Tokelau, you are enriched with our hospitality and yet we're just seeing you sit on your seat and wave your New Zealand flag. But we're under it. Help us out."

There were 40,000 people marching through Wellington on Friday afternoon, organisers predicted, and as many as 170,000 nationwide.

Many of the people here were young. They brought music, memes, laughter - and fury. Fury at what they said was inaction to the glaring signs of a changing climate, conclusive scientific evidence, and the changes being lived by Pacific relatives.

At the United Nations this week, all the so-called Pacific powers came under scrutiny for their climate stance.

The United States was pilloried for the Trump administration's moves to roll back environmental protections and its decision to leave the Paris Agreement. China said it would honour the Paris Agreement's targets but would do little more.

New Zealand's government, too, came under scrutiny for what some said was a lack of ambition.

"New Zealand's a country that can actually make a change in our region. So, if we make change here, we can make change everywhere bro," said Lewis, a 22-year-old student.

"I want them to save my people, save my lands bro."

Finally, the crowd reached parliament, and Ms Moeono-Kolio breathed a sigh of relief. The turnout was bigger than anything she could have possibly expected, she said.

"I'm so amazed," she said, face beaming as she walked through the iron gates to parliament grounds. "Standing in solidarity no matter what island we come from, what we speak, just coming together."

"I'm hoping to tell them: look at the people who've come here today. You cannot tell me you can't do anything. We're standing here in our second home and you're telling me you can't protect my first?"

As the Pacific climate warriors bounded across the lawn to the base of the round and weathered Beehive, the throngs filed in behind them, filling the large grounds in front of parliament to over-capacity. After 15 minutes, they were still spilling in. After 25 minutes, they continued to spill in.

Tagi Fano said the effort was remarkable, but it showed the depth of passion.

Then she shouted towards the towering grey stone building: "Please listen to us."

Samoan student Brianna Fruean was among those who rallied in Auckland.

Ms Fruean, who is a member of the 350 Pacific Climate Warriors, said they will continue to petition world leaders to ensure their policies reflect the group's mission.

"We're here to stand for our [Pacific] islands and make it clear that we're not drowning we're fighting.

"Climate change has shown up very powerfully all around the world, from the recent king tides in Kiribati to floods all the way on the other side of the world.

"We know that something is wrong with our planet. And we need to take action now.

"So, all the kids who are on the street here today are making sure that our world leaders know that we're watching them."

Ms Fruean said, "We will keep mitigating and adapting in our islands and making sure we're doing everything we can to get climate justice".

Api Sefo, of Tokelau, said Pacific islanders must not stop talking about climate change because they are the most vulnerable.

While today's rally is focussed on attempts to get New Zealanders to wake up to the climate crisis, Ms Sefo said Pacific islanders themselves must hold their governments accountable.

"Our islands are being threatened by rising sea levels and if this continues our islands will be the first to go," she said.