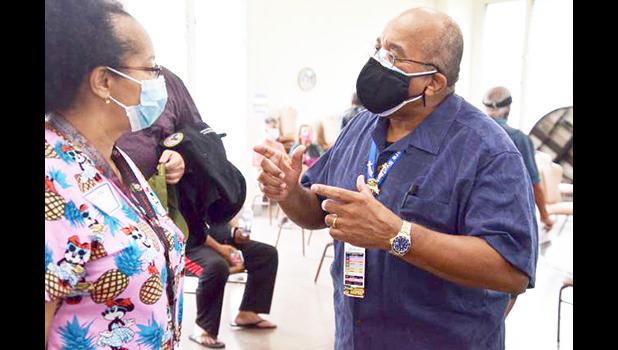 By
Kevin Knodell
reprinted with permission from Honolulu Civil Beat
Dr. Adam Robinson wants the VA and the Army to better combine resources to help more patients since they already share the medical center in Honolulu.

Honolulu, HAWAII — The agency that oversees veterans affairs for the Pacific has its headquarters at Tripler Army Medical Center in Honolulu alongside the medical command for active duty troops in the region, which runs the facility.

Despite some cooperation, the two entities largely operate separately and fall under different commands — often causing confusion and frustration for patients.

Dr. Adam Robinson — the director of the Department of Veterans Affairs Pacific Island Healthcare System and former Navy Surgeon General — wants to expand the relationship with the Army’s Pacific Regional Medical Command to make it easier for both to share patients and resources.

“It would be wonderful if I could become a partner with them in their in-patient facility, and actually spread the wealth of federal medicine, for active duty and for eligible family members and for retirees throughout the Pacific Islands,” Robinson said.

The VA’s Pacific Island Healthcare System is unlike any other VA system. Robinson is responsible for taking care of veterans on all the islands in Hawaii as well as the island territories of American Samoa, Guam and the Northern Marianas.

The VA’s Pacific system is often short on facilities, relying instead on partnerships with military installations and various hospitals and community clinics spread across the Pacific — including Tripler. Though the VA has used telemedicine to reach veterans on distant islands across 2.6 million square miles of ocean, some specialty medicine and procedures need to be done in person.

Robinson wants to make it easier for patients from across the Pacific to receive care at Tripler. But he said that doesn’t mean simply taking over hospital beds — he wants to share resources and expertise in an arrangement he hopes will equally benefit the military and the VA.

The military has highly trained doctors and nurses. But uniformed active duty medical personnel can be deployed in times of war and crisis for unknown periods of time.

When one of them is trained in a highly specialized medical field, that can sometimes leave patients with special needs without a local care provider for months and sometimes even require them to get treatment from military providers on the mainland.

“I think that I could provide assistance in hiring specialists in many of the different medical and surgical specialties, at Tripler,” Robinson said in a telephone interview last month. “And for that, they could then begin to take care of more of my patients, meaning more veterans in their facility.”

The U.S. military has had a particularly high operations tempo over the last two decades with troops continually being sent to ongoing wars in Iraq and Afghanistan in addition to a range of other deployments.

Robinson said the VA staff could fill those gaps and take care of military patients in their absence. “When the specialists return from deployment, they will still have a department that’s functioning completely, and they’ll just reintegrate back into that specialty as a specialist within that department,” said Robinson.

The two organizations already cooperate to some degree.

“Resource sharing is a cornerstone of our partnership,” Tripler commander Col. Martin Doperak told Civil Beat in an email. “Not only do we share space between our two facilities for various programs, but we also benefit from embedded VA providers within our hospital, who provide specialty care to patients from both systems.”

Robinson said his idea is to expand that cooperation to include orthopedic surgery, psychiatry and other specialties.

But reaching the right officials to get the right paperwork to allow expanded cooperation is a moving target.

The U.S. military health care system has been going through the largest restructuring in its history over the last decade with the creation of the Defense Health Agency in 2013. From a bureaucratic standpoint both the DHA and Army Medical Command would need to approve allowing Tripler to admit more patients from the VA and allow VA providers to treat Tripler’s patients.

“I’m not trying to get in front of any of that,” Robinson said.

The DHA is gradually creating a new organizational structure, establishing five health care “markets” in the third quarter of the 2021 fiscal year that would be based in the Virginia area, Texas, Colorado, Washington state and Hawaii.

The island of Oahu, home to the Indo-Pacific Command and the Navy’s Pacific Fleet, is considered particularly vital.

The VHA is also scheduled to assume management and administration of overseas military medical facilities in the fourth quarter of the fiscal year, which will include the establishment of Defense Health Region Indo-Pacific.

He also held discussions with Robinson and Doperak “on how they’re working together and things that may be barriers for them to work more closely together.”

“I do anticipate even closer collaboration in the coming months and year between the Tripler team and the VA team,” he said during a teleconference with reporters.