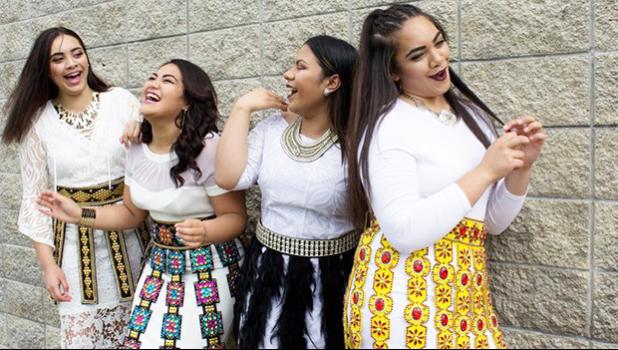 A Tongan woman is pushing the boundaries of Tongan fashion by taking traditional Tongan garments and adding a contemporary twist to the items.

During the day, you can find the rising Tongan fashion designer Mele Tamanilo working in IT for the Ministry of Justice.

But outside working hours, the Auckland based owner of Kanumez designs different types of kiekie, using non-traditional material to decorate the waist garment.

The kiekie is traditionally made out of plant fibres from pandanus, hibiscus and coconut.

Mrs. Tamanilo said the materials used definitely take the look of kiekie to the next level.

"My kiekie designs use different kinds of embellishments such as rhinestone, studs, spikes and chains. My kiekie have that 'bling bling' effect and most Tongan women love their bling bling. I wanted to make it more appealing to the younger generation especially, to encourage them to continue to wear the kiekie."

"I recently started using leather with my designs. I actually liked it a lot. A lot more than the previous materials I was using," she said.

She said fashion is something she's loved since childhood.

"I used to use pillow cases to sew clothes for my barbie dolls. I told myself when I get older that I don't want to just design clothes. I want to do something unique," she said.

"One day, I saw a video of Xena the Warrior Princess and I was admiring her waist garment that she wears. That's when it finally clicked for me. I could take the traditional Tongan kiekie and modernize it by ‘blinging’ it up and using different kinds of material."

Fast forward to June 2017 when the owner of Kanumez will be hosting her first fashion show in Auckland.

Twenty-four models from different age groups and walks of life will showcase the kiekie.

Veronica Maka, one of the volunteer models, applauded the work of Mele Tamanilo.

"I am all for entrepreneurship and people stepping out of their comfort zones, testing the waters."

"The fact that she's taking a chance on what she believes is bringing Tongan culture into new age fashion is a big challenge to the way we think about culture and I commend Mele for it."

"I am a big supporter for taking Tonga to the world stage."

"The best way to describe Kanumez' kiekie is that it's like a Beyonce version of what Tongan women are so used to traditionally seeing," she said.

Mele Tamanilo said that she had also looked into modernizing other traditional Tongan garments.

"We are always looking for different ways to expand. Hopefully from kiekie and ta'ovala, we'll move on to teunga tau'olunga outfits," she said.

The Kanumez fashion show will take place at the auditorium of Tamaki College in Auckland.

Proceeds from the event go towards Kanumez' attendance at Australia's Pacific Runway in October.

“As the global economy grows and technology brings our world closer together, we are going to need people who have the knowledge and have developed the skills necessary to compete,” stated Amata. “Pacific Islanders in particular have an excellent opportunity to advance with this type of education as those careers that require such skills aren’t necessarily considered to be jobs that are geographically isolated to big cities and the like…perfect for a geographically isolated, yet technologically proficient workforce,” she continued.

The event was hosted by the American Samoa STEM Partners - a public/private partnership working towards ensuring all children are STEM literate, and STEM College, Career & Trades ready. In addition to presentations and exhibit booths, the summit also included hands on activities and information for grades K through 12th in an effort to educate the community about the different STEM programs available to students both locally and across the country.

“I remain committed to ensuring that the youth of American Samoa are afforded the same opportunities and resources as their counterparts in the states, and I look forward to continuing to work with my colleagues in Congress to make sure that happens,” stated Amata. “I want to thank American Samoa STEM Partners Chairperson – Edna Asalele Noga of ASPA, and Vice Chairperson – Magdalene Augafa-Leauanae of the DOE for inviting me to participate in this event, and I look forward to many more future summits and STEM education events to come,” concluded Amata.

ASSOCIATION GEARS UP FOR FAFA-FABULOUS EVENING

The Samoa Fa’afafine Association’s Independence Variety Extravaganza tomorrow night is an opportunity to give back to the community.

So revealed the President of the Samoa Fa’afafine Association, So’oalo Roger Stanley, during a press conference at S.S.A.B yesterday.

Two days from the 55th Independence celebrations, So’oalo said they are excited and looking forward to a great time at the E.F.K.S. hall, Sogi and he has extended an invitation to members of the public to join them.

“Our charity is an annual event of the Samoa Fa’afafine Association with the utmost aim to give back to the community,” said So’oalo.

“For this year’s show, first and foremost is our contribution in celebrating the 55th independence of Samoa. The other main aim is the platform to showcase the talents of our fa’afafine and our young ones.”

So’oalo said there will be something for everyone.

“This is an opportunity to showcase their talent, show their creativity with fashion, to boost their confidence by being exposed to an audience and the public especially in entertainment.

“In the show there will be opera singers...fashion lines, there will be lot of dancing but the main aim is to try to entertain the crowd and get the exposure for these major sponsors.”

So’oalo said the show will also pay tribute pioneers of the Faafafine community who have passed on.

“The show will also pay tribute to all these girls (who have passed away) especially Tara Poumare and others... and these are some of the main objectives of this main event.”

For $20 a ticket, proceeds will be given to the Mapuifagalele Home of the Elders.

“For our show tomorrow please bring your whole family.

“Our special acknowledgements to our major sponsors S.S.A.B. as well as TV1, these have been the core businesses that have always been assisting us throughout the year. Thank you very much.”

Tickets can be purchased from S.S.A.B. or at the door of the E.F.K.S. Hall tomorrow evening.

They are beautiful on the outside and they are equally stunning at heart.

And for the first time, eight former holders of the Miss Samoa crown are joining the reigning Miss Samoa to support a fundraising activity to help another former Miss Samoa and Miss South Pacific, Manamea Apelu-Schwalger, to fight cancer.

The ‘Think Pink’ initiative is part of LIFE Con Explosion scheduled for the end of the week.

Mrs. Apelu-Schwalger held the Miss Samoa and Miss South Pacific title from 2001- 2002. The Think Pink initiative is the result of a partnership between Events, Marketing and Distribution (E.M.D) and the Samoa Cancer Society.

“It’s a concept where E.M.D. Life Con is working in partnership with Samoa Cancer Society.

“There are about ten former Miss Samoas that are all coming together in support of Manamea but also to try and do advocacy work for cancer, not just breast cancer.

Monday’s gathering at Tanumapua was a very touching and emotional moment, not only for Manamea but also for the former Miss Samoas.

“It’s overwhelming,” Manamea said. “It really is overwhelming. If anything in this journey, as a breast cancer survivor or patient, to be surrounded by so much love, it’s unbelievable.

“It’s absolutely overwhelming because it lightens a heavy load.

“For me, I know that it is God’s love that I still get to be with my loved ones today and from what I have seen, not only my former Miss Samoa – Miss South Pacific friends have come to show their support but also my country Samoa and with that, it’s very hard to explain how I feel right now because I am truly thankful.

“I know this is a painful situation to be in when a family member is affected or if anyone else has cancer.

“Breast Cancer is so real. If you look at these two girls, these are the loves of my life; my guardians, my family, my daughters.

Manamea speaks highly of the work of the Samoa Cancer Society.

“Samoa Cancer Society reached out to Auckland Cancer Society and I got assistance and they were always there just like my friends on Facebook, constantly  there, to encourage, to show that every step of the way, if they can’t help medically, technically, at least being there to show moral support.

“I know with Samoa Cancer Society, there are no specific media campaigns for specific cancer. For me, because I have breast cancer, I would like to think that I can assist voicing some of the awareness programs which are related to breast cancer.

Manamea also talked about Think Pink and how the former Miss Samoa are contributing into , saying that she will be at the Life Con show, as she have been invited to show the talents she has as a magnificent Island dancer.

“Think Pink initiative is dedicated to the breast cancers survivors in Samoa and it was born out of love, formulated by Events Marketing and Distribution (E.M.D.),” Manamea said.

“The girls (former Miss Samoas) will be helping with fundraising this coming Saturday for the first time, five former Miss Samoa – Miss South Pacific are going to be together under one roof so it is really something to behold.

Manamea hopes that partnerships like these will continue in the future.

“If anything, I know that cancer requires a collective help, it requires the work of everyone and it can’t be limited to just small groups. It takes the whole community; business community, awareness programs from Samoa Cancer Society and I do hope that this continues.