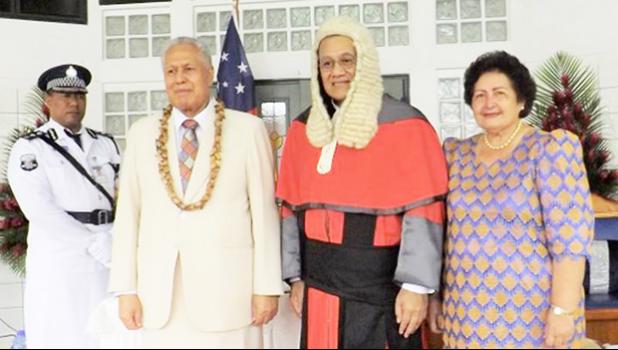 Apia, SAMOA — Samoa's caretaker government is continuing its attempts to undermine the judiciary.

The Human Rights Protection Party (HRPP) has written again to the Judicial Services Commission (JSC) requesting it act against the country's Chief Justice.

He's accused the Chief Justice of incompetence and not acting in accordance with the law, basic legal principles and well established precedents.

He told RNZ Pacific the Chief Justice should recuse himself from presiding over a Court of Appeal hearing tomorrow which will determine if election winner Fa'atuatua i le Atua Samoa ua Tasi (FAST) party's impromptu swearing-in on 24 May will now be recognized.

Leala'ilepule confirmed he was not satisfied with the response from his previous letter to the JSC after their convening on Tuesday so he wrote again Wednesday.

However, sources close to the JSC told RNZ Pacific that Tuesday's meeting was a heated affair with no consensus reached among the required quorum. The five member Commission comprises the Chief Justice, the Attorney General, the Ombudsman, a former Supreme Court Judge, the Justice Minister's representative and the Justice Ministry CEO in a non-voting capacity.

Further, the source added that Thursday's meeting was held without the Chief Justice or the former Supreme Court Judge so lacked a quorum to decide any action. The members who were present have vested interests with the HRPP government as their employer, according to our informant.

But the JSC has no authority to remove the Chief Justice.

Only the courts are able to recuse him or invite him to withdraw due to a conflict of interest. The Head of State can order the CJ's removal but only due to an infirmity of the mind, if he is physically unable to perform his duties, or due to misconduct or misbehaviour. None of these conditions apply.

THE ISSUE WITH THE CHIEF JUSTICE

Primarily, said the HRPP's Leala'ilepule, the concern is with the Chief Justice heading up Friday's Court of Appeal hearing when, it's claimed, he has demonstrated a bias to the FAST party.

Elsewhere, Samoa's judiciary has been lauded for its neutrality and its adherance to the Constitution and the law.

"We believe he shouldn't be presiding over the Court of Appeal tomorrow," said Leala'ilepule.

"So hopefully he will do the right thing and delegate it to other judges available."

But he added their preference would be neutral judges from a separate jurisdiction.

And the preference for foreign judges contrasts with a criticism of Chief Justice Satiu contained in his letter to the JSC, that he doesn't have the finer knowledge of Fa'a Samoa (Samoan custom and culture) to make judgements in line with the interests of Samoa and its people. Judges from another jurisdiction would possess less expertise.

It also looks like another delaying tactic to prolong the HRPP's time at the helm.

It has now been over 90 days since the April election, over twice the 45 days allowed for in the Constitution for the new parliament to sit.

"You can't call for the parliament to be convened unless he's satisfied there is majority, there's a party that holds a majority in parliament. That's his call and we respect that."

These ongoing delays were a primary reason for the Supreme Court referring Friday's case to the Court of Appeal.

The appellate court is expected to give a full and final determination likely recognizing FAST's impromptu 24 May swearing-in, thus clearing the way for the convening of Samoa's 17th parliament.

FAST has maintained its 26 seat majority during electoral petitions in the courts while HRPP now holds 17 of its original 25 seats, with both parties to contest eight by-elections.

Newsline Samoa reports Tuilaepa has filed an official police complaint after Fiame claimed in a press conference that Tuilaepa attempted to influence judges of the court.

Fiame said Tuilaepa has personally visited the court complex at Mulinu'u attempting to speak to three sitting Supreme Court Judges before key cases in May were decided.

She also accused Tuilaepa of sending his former MPs to attempt to visit judges in their private homes to speak with them prior to court hearings.

Fiame said "we have not sought to undermine the Court in such an inappropriate matter. This type of behaviour is outrageous and strikes at the heart of what is good, what is right and the conventions which are at the heart of our democracy."

Tuilaepa rejected the remarks as "untrue in every respect."

He told police "I deny every aspect of Fiame's statement and release as irresponsible and even negligent to the highest degree."

He said the intention was clear, to defame him and to question the integrity of his position as caretaker prime minister.