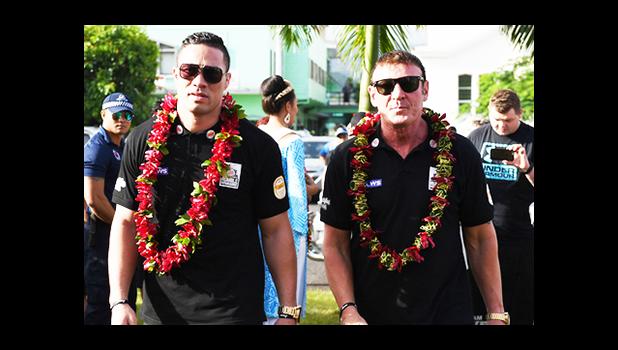 The nation of Samoa, and its prime minister, are set to steal the limelight during the worldwide telecast of Joseph Parker's heavyweight title fight in Auckland next month.

Where the New Zealand government, and Auckland council, have declined to help fund Parker's fight for the WBO title against Mexican Andy Ruiz Jr at Vector Arena on December 10, Samoa and, in particular Tuilaepa Aiono Sailele Malielegaoi, have shown no such hesitation.

A sponsorship deal understood to be worth $US100,000 ($NZ137,000) was officially announced today which means rather than flattering pictures of Auckland, the Far North, or Queenstown in the broadcast, and involvement from this country's Prime Minister John Key, there will be shots of the white sandy beaches of Samoa and the presence in the ring of 71-year-old Malielegaoi.

"We had no hesitation [of offering financial support] due to the major benefits we can reap," Malielegaoi said.

Parker's promoter David Higgins, of Duco Events, acknowledged there could be some confusion from viewers around the world as to where the fight is being held. "We did try," he said of the applications for funding closer to home. "Yes, if you're a viewer watching this fight in London, or an investment banker in Germany or you're a lawyer in Vegas, it might seem somewhat odd that it's filled with a Samoan tourism promotion and introduced to the world by the Samoan Prime Minister, but that's not our doing."

Higgins confirmed Malielegaoi would be given the honour of introducing the main event. "We'll certainly invite him into the ring before the main event when international viewership is at its peak and there be a ceremonial introduction then and the national anthems.

"We might invite him back into the ring after to be part of the winner's belt presentation and he'll have the opportunity to say a few words to the global audience."