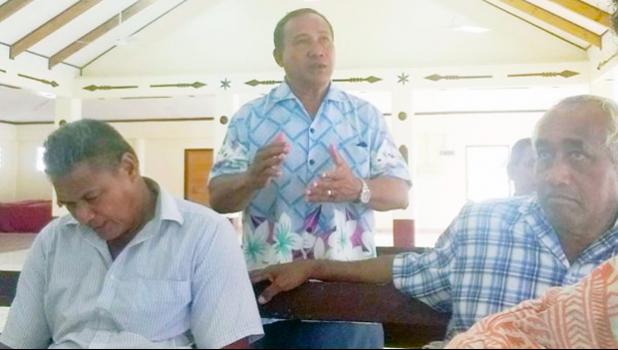 APIA, SAMOA — Church ministers who say the government’s move to explain the ramifications of new tax law governing their income is late, and they also have a message for Prime Minister Tuilaepa Sa’ilele Malielegaoi’s administration — use the church tax money wisely!

“There are countless families in Upolu especially at Aleipata who don’t have access to water and electricity,” Reverend Siaosi Samuelu of the Catholic Church at Salua, Manono said.

“Use those monies to help those families. Use it wisely please but don’t abuse and waste them.”

Rev. Samuelu was among church ministers who attended a seminar at Manono-uta yesterday where the Ministry of Revenue was attempting to explain how the new law will work, starting January 1, 2018.

Passed by Parliament in June, the law removes the tax exemption clause for income generated by church ministers. This means that starting on the first day of 2018, all income earned by church ministers will be taxed — including monetary gifts they receive from funerals, weddings and other fa’alavelave.

According to Rev. Samuelu, the Ministry’s move to explain the law is counterproductive.

“We would’ve liked a bit more time on this, this is at such short notice,” he said.

“For your information we only heard this on the radio and newspapers but not from the government."

“Now they’ve come and want to hear from us, personally, it’s a waste of time because the law has already been passed. What more do they want from us now?"

“They should’ve come before the Bill was being passed.”

Rev. Samuelu said he doesn’t object to the government’s plan but he wants to make it clear that common courtesy would have gone a long way.

In any case, now that he will pay tax just like everyone else, Rev. Samuelu wants to ensure the money is spent accordingly.

“Don’t spend it on road constructions where in the next two years, they dig the road again,” he said. “That is a waste of taxpayers’ money. Stop wasting money on useless projects.

“They should look at solid developments, not another burden to everyone's shoulders.”

During the seminar yesterday, it was revealed by the Ministry that one of the main reasons pastors are being taxed is because ‘the government has noticed that some pastors receive more than Chief Executives Officers (government officials).”

Government CEOs receive an annual salary of more than $120,000 plus benefits.

In response to some concerns raised during the meeting, the Ministry of Revenue pointed out that the Bill was proposed two to three years ago.

“We’ve been discussing this with National Council of Churches, elders of the E.F.K.S., the Methodist church and other churches and this is the question… why?

“The Bill is not new from our perspective; it's been years since the government has been trying to put it in place.

“The government and the Ministry have noticed that some of the pastors receive more than a C.E.O. and that’s why we think it will be nice for pastors to lend a hand (tatau na velo sina sao o fa’afeagaiga).”

The Ministry also explained that “Epikopo” for the Church of Jesus Christ of Latter Day Saints is excluded.

“The ‘sefulua’i’ of the Latter Day Saints is the same with taulaga and faigame to some churches,” the ministry revealed.

“They are not included under this Bill.”

But Rev. Sialaoa Pagamalie objected. He reminded the Ministry that “epikopo” is paid by the church.

“To make it fair and square, the ministry should look into this,” he said.

“To ensure all the requirements of the Bill are met, epikopo should be taxed. That’s just a reminder for the Ministry.”

The government organized the seminar for church ministers within sub district so they fully understand their obligations.

The seminars continue today at Tafagamanu.