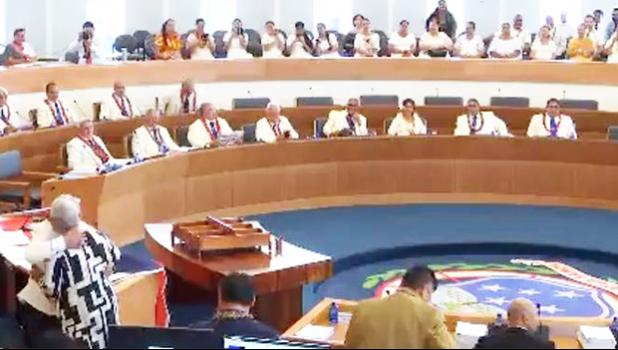 Apia, SAMOA — The Samoan Prime Minister and her predecessor embraced to cheers in Parliament on Friday, effectively ending months of turmoil following the disputed April election.

It came after opposition MPs were sworn in after a court ruling paved the way for them to be allowed into parliament.

The speaker, Papali'i Lio Masipau, had banned elected members of the opposition HRPP from attending this week's parliament sessions and refused to swear them in.

On Thursday however, the Supreme Court ruled in favour of the HRPP saying the speaker was obligated to swear in its elected members.

Papali'i banned the opposition MPs for what he saw as their continued denial of the legitimacy of the FAST government.

But the court order, handed down by chief justice Satiu Simativa Perese, said the speaker had an obligation to administer the oath of allegiance under standing order 14.

It ordered the speaker to carry out the obligation forthwith to fulfil the requirements of Article 61 of the Constitution.

Ahead of the swearing in ceremony

The Samoa Observer reported Minister of Works Transport and Infrastructure Olo Fiti Vaai was the first to greet the members of the rival party who were already seated on the right side of the House.

His gesture was received with a hug from Tuilaepa who stood up and crossed the floor to greet his successor Fiame.

It was a relief from those inside the House to see the leaders of the country finally meeting halfway, smiling and hugging.

Our correspondent said people in the gallery stood up and clapped upon this sight.