Rescue and evacuation efforts ongoing in Hawaii after floods 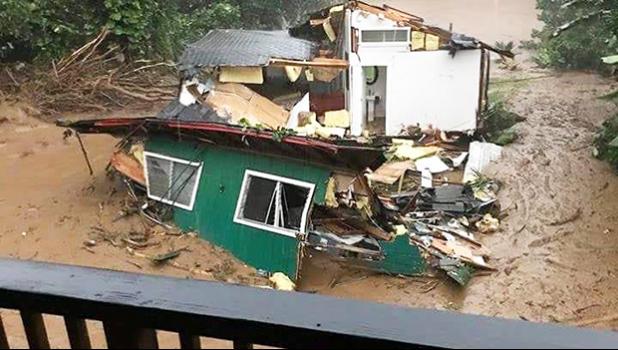 Kaua'i County, HAWAII — Hundreds of people in Hawaii have had to be airlifted after floods devastated Kaua'i County on the island of Kauai.

It has also caused damage to parts of neighbouring Oahu.

The state's Red Cross is busy delivering emergency aid to people, many of whom are in evacuation centres.

Record flash flooding and severe thunderstorms over the weekend turned roads to waterways and triggered mudslides, while there were widespread power and water shut downs.

In some cases access to emergency shelters was blocked.

American Red Cross Hawaii CEO Coralie Matayoshi said damage assessments were ongoing but their teams were doing what they could to assist, including providing medical aid volunteers to help in the shelters.

"We actually, on Oahu, had three destroyed homes that were completely unliveable and 26 with major damage, 96 with minor damage and 38 homes that were affected. And so we have been doing damage assessment and helping them with recovery.

"On Kaua'i its been more precarious the situation. A lot of landslides and flooding and inaccessible areas. Hundreds of people have had to be evacuated."

The Governor of Hawaii has issued an emergency proclamation for Kauai.

Communities on the north side of Kaua'i had been widely affected, and also on the east side of Oahu. Ms Matayoshi said that the intensity of this flooding disaster was unprecedented for Hawaii.

"The rain came down fast and furious, and one of the residents on Kaua'i said she'd lived there all her life and it's worse than Hurricane Iniki (the most powerful hurricane to strike the US state of Hawaii in recorded history in 1992)," she said.

"I think it's because it did such underground damage. A lot of the trees fell, and the foundations and the roadways and bridges and everything just collapsed."