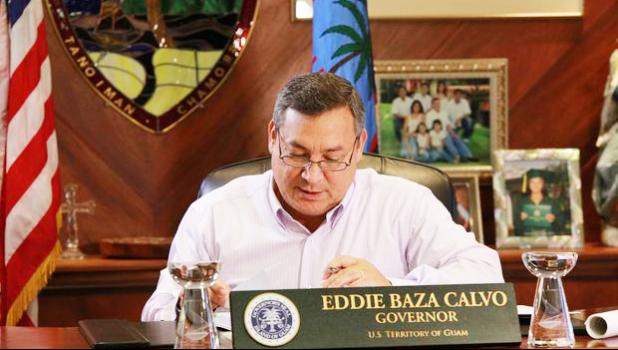 Mother Chara Fatu welcomed her newborn baby, Tiara New Year-Fatu, with family and hospital staff sharing in on the joy. Baby Tiara was Samoa’s first baby of 2018, born at the stroke of midnight.

And because Samoa is among the first countries to welcome the new year, the baby boy could possibly be the world’s first baby in 2018.

The parents of the baby, Chara and Fiaula Fatu, hail from the village of Satapuala.

Guam's Governor says the island enters the year with an economy which now stands at $US5.8 billion, but it is still in need of a greater voice in Washington DC.

Calvo said his Admininstration had repaved roads, started construction on a shelter for foster children and a new Guam Police Department precinct, and had worked with the community to safeguard families and remove illegal drugs from the island.

However as the Marianas Variety reports, Calvo sees there are many issues that require more attention from national leaders.

Citing the need for Guam to have 'a constant and consistent presence' in Washington DC, the governor wants to hire a lobbying firm that will advocate for the territory's issues and concerns.

Besides a non-voting delegate to Congress, Guam also has a liaison office in Washington, but Calvo said the island's issues had not been given much attention.

He said Guam is at a disadvantage as they didn't have a vote in Congress and it had become more apparent that a greater presence is needed.

A Senior Lawyer, Unasa Iuni Sapolu, has called on the government to consider legalizing marijuana.

In her view, it will help Samoa’s economy through the export of medicinal marijuana, especially coconut oil and marijuana fusion.

She also believes this will help reduce the number of inmates housed at Tafa’igata Prison.

“Furthermore it will save costs to Samoa when all those imprisoned for possession of marijuana etc. are no longer fed in jail, no longer accommodated in jail and there are no more criminal offenses relating to marijuana,” she said.

“For health reasons, those with cystic fibrosis, epilepsy, cancer, depression and other health problems can be treated with marijuana.”

She told the Samoa Observer the government is wasting money and the Court’s time.

According to Unasa, there is a need to legalize marijuana for medicinal and recreational use.

“Boost revenue from tourism by recreational use of marijuana and it will help cure some illnesses through using marijuana,” she said.

As reported last year, opium is the only legal drug that is allowed under Samoa’s Narcotic Act. It is classified as a Class B narcotic together with marijuana and it’s considered an illegal drug.

Tonga's constitution states the King has to appoint the Prime Minister-Designate for the election to come into effect.

Mr Pohiva was re-elected by the Legislative Assembly in a 14 to 12 vote following the snap election in November.

He served as Tonga's 16th Prime Minister from 2015-2017 before the King dissolved Parliament following concerns about the government’s conduct.

The long-time democracy campaigner is Tonga's longest-serving active Member of Parliament and first took a seat in 1987.

The Prime Minister is expected to formally announce his Cabinet line-up in the coming week.

Tuilaepa quoted a figure of $US4 billion and told local media several projects would be funded from grants and loans provided by the Chinese.

He said two new bridges would be built including a replacement for the Vaisigano bridge on Beach Road, next to Sheraton Aggie Greys hotel.

The other bridge would span the Mali'oli'o river at Samalaeulu in Savai'i.

Meanwhile, the Japanese government-funded reconstruction of the Apia wharf is due to be completed in June.