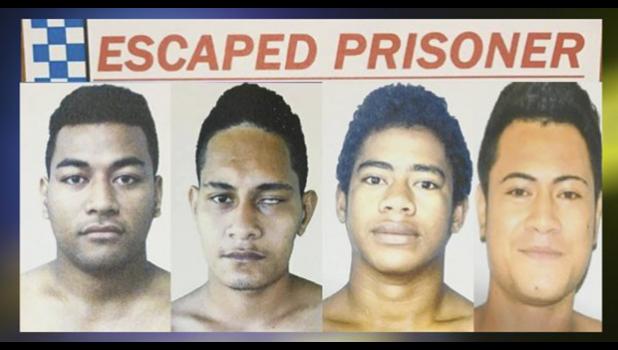 A man convicted of tying up a male while raping his wife at knife point had escaped from Tafa’igata Prison.

The good news is that Lauititi Tualima has been recaptured.

But he was among four prisoners who escaped from Tafaigata this morning, according to the Samoa Police Service.

According to the Police, Tualima and Solia are now back in police custody.

“The police are appealing to members of the public for their assistance in order to catch the two remaining convicts.

More than half of the 9.6 million US dollars the Samoan government is seeking from Parliament will go towards tax and duty rebates.

The Minister of Finance, Sili Epa Tuioti, has asked Parliament to approve the additional funds as a supplementary budget for the year 2017- 18.

Part of the tax and duty rebates is understood to go towards Virgin Australia, following the termination of the airline agreement earlier this year.

Sili said the government was still targeting the deficit to be within 3.5 percent of Gross Domestic Product.

He said he was upbeat about the current state of the deficit which currently sits at 2.1 percent of GDP.

The minister said the economy continued its strong growth at 2.4 percent

An investigation by the Office of the Ombudsman into the Samoa Prisons and Corrections Services (S.P.C.S.) has cleared the wife of an Associate Minister whose conduct had been questioned by two former employees.

The clearance is highlighted in a letter from Ombudsman, Maiava Iulai Toma, to Prime Minister Tuilaepa Sa’ilele Malielegaoi, obtained by the Samoa Observer.

The Associate Minister in question is So’oalo Mene, who held the Prisons portfolio. His wife, Levaopolo Rosa Siaosi, was the A.C.E.O. at S.P.C.S.

Two former employees, Andrew Sam Chong and Kisa Ao had accused her of using her husband’s position to carry out alleged “wrong doing” – including their unfair dismissal and illegal hiring.

“I have looked at the many elements of the allegations of wrong-doing against Levaopolo,” Ombudsman Maiava wrote to Prime Minister Tuilaepa in a letter dated 24 November 2017. The letter was to accompany the Ombudsman’s investigation report.

“Only in one instance is there clear irregularity. This involved the recruitment and employment of two Correction Ofﬁcers identiﬁed in the Report as LL and MM."

“The actions by Levao in the recruitment of LL and MM were irregular but in effect achieved, by reasonable assessment, the best outcome for S.P.C.S."

“No negative ulterior motive lay behind these actions; rather they reﬂect the proper exercise of initiative.

“She failed however to inform her superiors of her actions or to get their clearance of them. A greater failure by far, should it be true, is to think that she did not need to have such consultations. This would be tantamount to usurping the authority of the Commissioner.”

Levaopolo was suspended during the investigation.

She has since been reinstated while her husband, So’oalo, has been reposted to become the Associate Minister of Justice and Courts Administration.

With dengue fever outbreaks across the Pacific, Auckland Regional Public Health Service (ARPHS) is advising anyone traveling to the region to take steps to avoid mosquito bites.

Auckland has seen a spike in dengue fever cases with 70 percent of cases from Samoa in the last two months.

"Dengue fever can be a severe illness. Those who travel to Pacific countries frequently are at risk of repeat infections with different strains of the dengue virus. This can lead to dengue haemorrhagic fever, which can be fatal."

Symptoms of dengue fever include the sudden onset of fever for two to seven days, intense headache, muscle and joint pain, nausea, vomiting and skin rash. People who develop dengue haemorrhagic fever may also develop symptoms of bleeding such as bruising and nose bleeds, and internal bleeding can also occur.

There is no vaccine currently available in the Pacific for dengue fever; nor does vitamin B prevent mosquito bites. The only way to prevent infection, says Dr Barnfather, is to avoid being bitten by mosquitoes.

"Although the commonest time for bites is early morning and late afternoon, dengue-carrying mosquitoes also bite all through the day."

Take precautions to ensure you avoid being bitten.

The Smithsonian Institution in Washington D.C. will archive historical Pacific films as part of a project focusing on indigenous people called Recovering Voices.

The collection dates back to the 1860s and the Anthropology and Global Indigenous Peoples group will be doing research cataloguing in 2018 in order for the audience to have a description into the footage.

Anthropologist Joshua Bell wants to make the large collection of films more accessible to the Pacific community around the world.

"The reason we're interested in that is because there's a lot of stories about linguistic and cultural decline in terms of languages, going silent, cultural practices no longer being carried out in various communities.

"At the same time that's happening, there's also resurgence with indigenous communities around the world," he said.

Mr Bell said there is a possibility that some of the films may not be viewable and the project will involve finding what can and cannot be used.

"Part of it what the team will be doing is discerning what is viewable and to then engage with those.

"The earliest material we have from Samoa is from about 1918, by an individual called Chester Outing who I sadly don't know much about.

"What we will do is research together as a team and bring in our knowledge to supply the information needed for the films," he said.

The Smithsonian Institute Pacific archives was established in 1975 and Mr Bell said the collection covers the whole Pacific region.

Recovering Voices is an ongoing project that aims to cover all indigenous communities around the world.