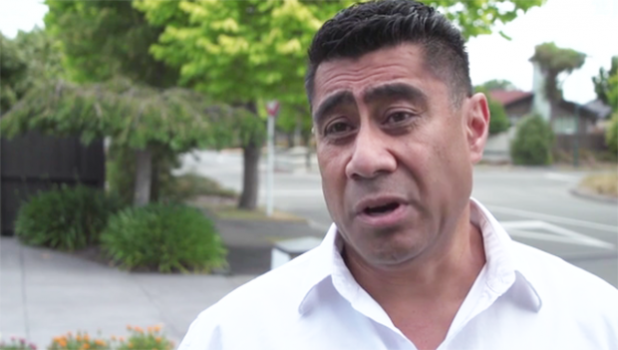 CHRISTCHURCH MAN STUNNED AFTER TRADIE CALLS HIM THE N-WORD —

A Christchurch man says he's "deeply disappointed" rather than angry after a tradesman called him a n***** and made gorilla noises at him.

Peter Retimanu, 53, is a New Zealand-born Samoan who lives in Shirley in Christchurch.

This morning he got in an argument with a tradesman who had been painting the neighbour's house, because a worker had parked too close to their driveway.

Retimanu says he asked for the car to be moved to give a clear line of sight for traffic, but they refused. Then, he said, "things got heated" and the painter called him the n-word.

"I felt, not so much anger, but a deep disappointment. I couldn't believe it - I said, 'You called me a what?'," Retimanu said.

"I think because you don't hear that word spoken at all, you go into shock. To compound it, he started making primate, gorilla noises. This was real redneck stuff.

"I thought, of all the coloured people he could have said that to he was very fortunate it was me. I'm pretty sure if he was in Manukau he wouldn't be able to walk by the time he got out of there."

Despite his rage, he walked away. He didn't get the man's name, or his company, although he later had a "terse" conversation with his neighbour.

SAMOA POLICE CALL ON PUBLIC TO THINK SAFETY THIS WEEK

The Ministry of Police wanst everyone to have a safe week as the nation prepares for Christmas next Monday.

As such, they are advising the public to stay safe and make sure family members and loved ones are protected.

This message was relayed to the Samoa Observer by the Police spokesperson, Auapaau Logoitino Filipo.

“This is meant to be season of celebration,” he said.

“Our goal is that we want everyone to be safe during the festive season.

“We want this season to be a joyful occasion, not a sad one.”

As part of their role, the Police have started camps and they have increased their presence on the streets to deter drunk drivers and troublemakers.

“There will be police officers on duty on our roads until the holidays are over,” he said.

“This is to ensure the safety of our people who travel on our roads.

“All drivers must have in their possession their driver’s license all the time.”

There zero tolerance for drunk drivers, he added.

P.M. HITS OUT AT ‘GREEDY’ PRINCIPALS

Prime Minister Tuilaepa Sa’ilele Malielegaoi has cautioned members of the public about Principals and School Committees whom he has accused of preying on the excitement of parents and students at end of year prize giving.

Tuilaepa said traditional presentations costing parents and families lots of monies should not be allowed. He said that certain school Principals are utilizing the opportunity for personal gains.

He did not name any one in particular.

“This is not a new issue,” Tuilaepa said. “It has been dealt with by the previous Minister for Education and C.E.O. who stopped the unnecessary spending by families. This has become a major burden.”

The Prime Minister added that elaborate spending on prizegivings is unnecessary.

“Even teachers waste time and money preparing for the end of the year prize giving when they could have just used what they have within their resources, such as coconuts, faausi or cocoa rice,” he said.

“These are simple things they can use for such events.

“There is no need to task the children to bring fine mats, some money for the guests and other things for sua presentations

“At the end of the day, it’s the parents that will look for the money to facilitate these things.”

Tuilaepa said he has had parents come to his office to ask him personally for money. One of them was an elderly mother from Savai’i.

“Her son had a good placing at Asau College and so she was worried that she could not give what was asked of her son to bring to school for the traditional presentations,” Tuilaepa said.

'Akilisi Pohiva, who was removed from Tonga's prime ministerial post by King Tupou VI in August, has been re-elected.

Mr Pohiva got 14 votes in the 26 member House, with the only other contender, former deputy prime minister Siaosi Sovaleni getting 12.

The result was announced by the interim speaker Lord Tangi after he presented the results of today's secret ballot to the King.

Mr Pohiva's Democratic party had a resounding victory in the November election, winning 14 of the 17 People's Representatives seats.

Another banking service once reserved for branches is now available on ANZ’s popular goMoney app. Customers with Android devices can now send money overseas from ANZ goMoney and pay an international transfer fee of $9*.

“We’re investing in our digital technology so customers can do more from the palm of their hand with our one app. It’s convenient and cheaper than going into a branch.”

A NUCLEAR WASTE DUMP IN THE PACIFIC OCEAN IS LEAKING

… and climate change is to blame

A nuclear waste dump in the Pacific is leaking radioactive material - and it's going straight into the ocean.

According to a report from ABC News, Runit Island - the site of the largest nuclear clean-up in US history - is being hit hard by rising oceans, caused by climate change.

The people of Enewetak Atoll in the Marshall Islands are the ones left to deal with the problem.

Radioactive contamination means they have had to move away from a traditional diet of fish and coconut, to processed American foods, ABC reported.

"To me, it's like this big monument to America's giant f... up," said Jack Niedenthal, who has spent decades helpingthe locals of the Marshall Islands' Bikini Atoll fight for compensation.

"This could cause some really big problems for the rest of mankind if all that goes underwater, because it's plutonium and cement," he told ABC

"The United States Government has acknowledged that a major typhoon could break it apart and cause all of the radiation in it to disperse," says Columbia University's Michael Gerrard.

He told ABC that it's possible the surrounding area's condition wouldn't get much worse if the dome broke open, however.