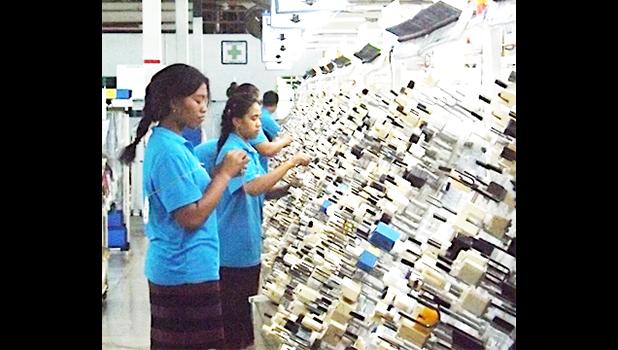 Washington, D.C. – Thursday, August 24, 2017 — Congresswoman Aumua Amata, who serves on the Veterans Affairs Committee, welcomed the signing into law of the Veterans Appeals Improvement and Modernization Act of 2017 (H.R. 2288), which she was proud to cosponsor.

“Veterans in American Samoa and elsewhere can face frustrations and delays in getting their claims and cases resolved, and this bill makes important reforms so that they can get the answers they need from the VA,” said Aumua Amata. “I want to congratulate Congressman Mike Bost, the bill’s sponsor, along with Chairman Phil Roe and the entire Committee, on this accomplishment for our veterans.”

The Veterans Appeals Improvement and Modernization Act of 2017 improves the veterans’ appeals process, giving veterans three ways to pursue the appeal, including having an adjudicator review the original evidence as considered previously, submitting new evidence for review followed by a new hearing, and finally, transferring their claim to the Board of Veterans’ Appeals.

“It’s been an effective month in Washington in making several useful changes for our veterans,” continued the Congresswoman. “The Veterans Affairs Committee began work on this bill back in May, and I’m so pleased to see it become law so that our veterans can begin to see results.”

Earlier this month, the Congresswoman was privileged to host a Veterans Choice Workshop in American Samoa to help veterans and their families know their options. The VA sent representatives of the VA’s third-party administrator, TriWest Healthcare Alliance, to lend first-hand expertise to this beneficial informational session. She continues to urge veterans to look into some of their options with the VA, including the Veterans Choice Program, which Congress acted recently to expand and fund, and new programs and technology applications announced this month by the VA to improve veterans’ means of scheduling and communicating on healthcare matters.

Prime Minister Tuilaepa Sa’ilele Malielegaoi is waiting for a “divine whisper from the heavens” on someone to fill the vacant Minister of Agriculture and Fisheries portfolio.

The role became available on Wednesday after La'aulialemalietoa Leuatea Polataivao Fosi tendered his resignation in the wake of criminal charges against him.

On Tuesday, La’auli was charged with allegedly obtaining money by deception. His wife and another business partner were also charged.

The charges are in relation to an ongoing dispute over a nonu company involving another senior member of the ruling Human Rights Protection Party and Associate Minister of Cabinet and Prime Minister, Peseta Vaifou Tevaga.

“Even though the charges are not related to performing his duties and responsibilities as a Cabinet Minister, he (Laaulialemalietoa) decided to resign to protect the integrity of Government and Cabinet,” Tuilaepa said.

"He made the courageous decision for the sake of the government’s accountability and transparency.”

Tuilaepa said the former Minister has led by example.

“It is one of the hardest experiences to see our Minister brother go through this difficult situation. Nonetheless I want to thank him for his boldness.

“Despite his eagerness to serve his country, he did the right thing and has stepped down.

“I was hoping this would be settled as this business venture started some four years ago,” he said.

Tuilaepa added that the incident is a timely reminder to public servants that the performance of their duties is subject to public scrutiny.

Asked about a potential replacement for La’auli, Tuilaepa said that to date he has not yet thought about a replacement reiterating that he is waiting for a divine whisper from the heavens on a successor.

A Chinese businessman, James Sun, has refuted claims by a Samoan woman that his company works on Sundays.

“We don’t work on Sundays,” Mr. Sun told the Samoa Observer yesterday. “We came last Sunday to remove timber, after receiving calls that someone was stealing our timber.

“We did some work by removing the nails on the timber in order for us to take our timber, but that was it.”

The Chinese businessman made the comments in response to a complaint by a nearby resident, Tuilaepa Soiamoa Grey. She was unhappy that the company was working on Sunday.

“As a Christian country, our day of worship is on Sunday,” she said.

The woman also questioned the legality of the recent amendment to the Constitution to allow Samoa to be declared a Christian state. “I have nothing against the government’s decision to make Samoa a Christian state. I fully support it.

“But what I find contradictory and hypocritical, is when the government changes the Constitution, yet allows foreigners to disrespect our day of worship by continuing to do hard labor on Sundays,” she said.

Tuilaepa lives next to a construction site at Vaitele. The workers are Chinese and they have been working on the Pesega Fou School.

According to Mr. Sun, although they are not Samoans, they have a lot of respect for traditions and the culture of Samoan people.

“I am married to a Samoan woman, we have four children and one on the way and we are active members of the E.F.K.S. We are God fearing people,” said Mr. Sun.

“We may be Chinese but we are not notorious people, we are in Samoa and we do what Samoans do and most of all, we have the utmost respect for Samoa’s traditions.

“Please rest assured that we don’t work on Sundays. We came last Sunday to remove our timber, but it was not even a whole day.”

He said there is no construction work on Sundays.

He then referred to the Pesega Fou School Principal; Rebecca Toleafoa Toala who put in place conditions of the project which strictly disallows any construction of the school project on Sundays.

“We have signed the contract of the project with the Construction Company and this was one of the conditions is that there is no work on Sundays,” he said.

“This school belongs to the Latter Day Saints Church and under no circumstances that hard labor work is allowed on Sundays for this project, especially this project,” said the Principal.

Va’a Alofipo who was in charge of leveling the site and putting up the fence said their workers have not worked on Sundays since the project started.

A family-owned New Zealand manufacturer, Fero, is setting up in Samoa and will be offering employment to skilled workers left jobless by the exit of Yazaki.

Today is Yazaki's last day of operation in Samoa, and its departure leaves 700 people out of work.

Fero produces wiring units that fit into products such as parking meters and police cars.

The company aims to start manufacturing at the former Yazaki site in Vaitele.

Fero's general manager, Sam Fulton, said the company has a growth strategy for their Samoa operation, which gets underway on the first of November.

"We're looking at an initial kick-off with between 50 and 70 staff. It's our goal to be employing 200 staff within 24 months. There's a bit of dependency on the amount of work that we can secure for the plant and we'll be looking towards the Australian market for that."

Another company, Samoa's Sleepwell International, has announced plans to start manufacturing beds and furniture at the Vaitele industrial site as well.

The Northern Marianas is the third fastest growing tourist destination in the world, according to the United Nations World Tourism Organization.

In 2016, tourist arrivals in the CNMI grew by just over 37 percent than the previous year.

According to the UN only the Palestinian territories and Egypt had more growth at nearly 58 and 51 percent respectively.

"We're really getting a lot of mileage from our China Visa Waiver program where the Chinese can come here without even getting a visa and they can stay here for two months. But the biggest performer has been the South Korean tourist market, which is our leading market right now as it has dislodged Japan and China.

“The presence of a lot of low budget airlines from Korea is making the difference.”

A businessman in the Northern Marianas has admitted involvement in a large-scale birth tourism business on Saipan.

Richard Peng reached a plea agreement with the prosecution and told them his former business partner had made his property on the island available specifically to house pregnant Chinese women.

He said the business partner even had a price list.

Peng also admitted that on one occasion he received $7,352USD for allowing a pregnant Chinese woman to live at his property.

He was charged in federal court with one count of harboring illegal aliens.

The offense carries a maximum penalty of five years in jail.

A video that appears to be ridiculing Pacific Island names has angered many, and has been described as offensive and encouraging casual racism.

The video is from an Australian television show, from a segment called 'Footy Kids in Cars', which also aired on Sky TV in New Zealand.

Children were asked: "What's the funniest name in the NRL?"

All the names the children were given to try to pronounce were Pacific Island names.

Their parents laughed while the children struggle with the names, with one parent saying, “there's no easy names in there, is there? Nothing like Ben Smith.”

The video has angered many on social media, with some saying it is racism disguised as comedy, and uses children to downplay the fact that the show is mocking Pacific names.

In response to the video, RNZ asked RNZ Pacific, RNZ Te Manu Korihi and Coconet.tv reporters to demonstrate how to correctly pronounce these names.

It's not the first time Australian media has come under fire over the pronunciation of Pacific Island rugby league players’ names.

Commentators were accused of racism amid complaints they were not pronouncing Pasifika names correctly at the 2016 Pacific Island Rugby League Internationals.

Last year, Coconet.tv asked NRL players to set the record straight on how their names should be pronounced.