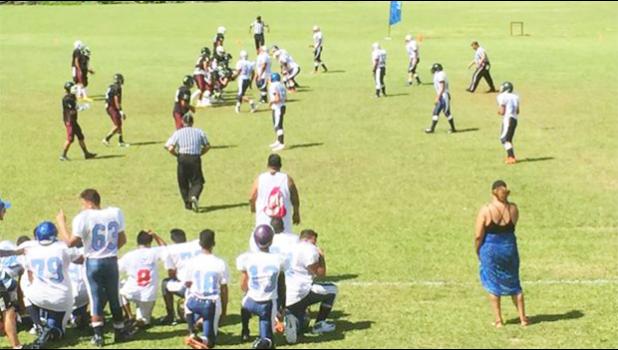 Following their first game against American Samoa’s Tafuna High School last month, Football Coach, Agatupu Lefao and his team are heading to American Samoa next month to play against other high schools.

Utilizing the talents of young Samoans is the mission behind Coach Agatupu’s passion for his students to get into American Football.

Last month, St Joseph hosted an inaugural Gridiron Camp and game at St Joseph’s College. Although they lost to Tafuna High School, Lefao is nonetheless proud of his team.

“The game was exciting not only for the players, but also the coaches.

“We nailed the first touchdown and the first interception and the end result was 26-40. “But it did not take away from the fact that our students played their hearts out and are ready for the next two games next month,” Lefao told the Samoa Observer.

“Our next step is to play with the league in other schools in American Samoa, until we can establish games with other local schools.

“Unfortunately we don’t have enough coaches to go around to build another team in Samoa.

“But as of now, we’re only looking to play over in Pago Pago.

He said that negotiations are continuing with the Football Division of the Department of Education in American Samoa.

On Wednesday, August 02, 2017, Attorney General, Talauega Eleasalo Ale met with local travel and airline agents at the American Samoa Visitors Bureau conference room to discuss immigration policies that support visitor growth to our territory. To help local agents better understand the role and responsibility of the government to regulate the entry process, the Attorney General explained current immigration policies, procedures, and their intention. This led to an open discussion of the issue and its impact on the visitor experience.

Based on the feedback from the local industry members, the Attorney General made note to look into ways to create a more adaptable permitting process that will support local travel and airline agents to meet the demands of their clients and our territory’s growing visitor industry.

The Attorney General and his team are working on an online immigration permit system that will be launched by the end of the year. This online platform will allow agents and visitors to obtain entry permits through a more convenient and timely process. To ensure the success of this new initiative, the Attorney General has committed to periodic meetings with the Visitors Bureau and travel & airline agents to continue the dialogue to proactively improve and streamline this entry process to support our local industry and drive visitor traffic to our destination.

Medical marijuana advocates in Guam are still unsure when a full-scale program will be up and running, despite recent legislative moves.

A managing partner for Grassroots Guam, Andrea Pellacani, welcomed the move although she said it still didn't mean people could start growing or selling cannabis.

Ms Pellacani said the law simply allowed people to apply for a license from the Department of Public Health and Social Services.

Andrea Pellacani said the government still indicated there could be delays in implementing a full program.

Guam legalized medical marijuana via a referendum in November 2014 with 56 percent voting in favor of it.

However there have been a number of legislative stumbling blocks including a veto from Governor Calvo earlier this year.

The decriminalization of homosexuality in the Cook Islands could be one step closer.

A proposed overhaul of the 1969 Crimes Act excludes sections that ban homosexuality.

Currently, the law bans "indecent acts" between two men, and "consensual sodomy" with prison terms of between five and seven years, although convictions are rare.

LGBT activists in the country have long been pushing for an amendment, and the draft Crimes Bill 2017 brings that one step closer.

The Solicitor General, David James, says the new bill makes laws suitable for the modern era, and means people will no longer be locked up for their private conduct.

However, it will not legalize same-sex marriage.

The bill will soon be open for public submissions, and will go back to parliament later this year.