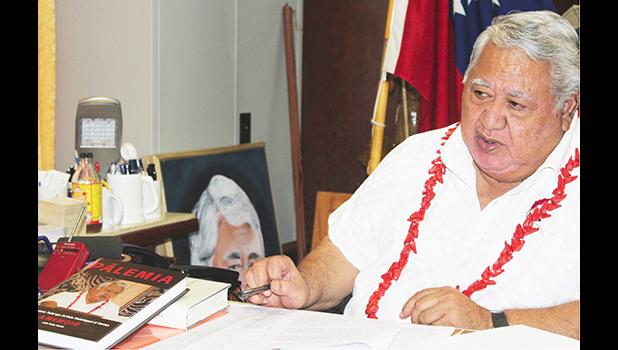 After decades of running various projects in Samoa, the American Peace Corps program celebrates 50 years in Samoa, proving it's just as popular today as it was back then. Almost 2000 Americans have volunteered their services, since it was first set up in Samoa back in 1967 after a devastating cyclone.

But over the years they've had a wide focus within communities.

"Some of them were engineers and architects and helped with the construction of the wharf where the ferry departs to the other island, the original airport terminal building, the reclaimed area along the waterfront where the Central Bank is now, there was some assistance setting up the National Provident Fund," she said.

Sherry Russell said participants served for two years and lived in a Samoan village, with many becoming fluent in the Samoan language and customs.

"One of the things is building relationships and so Peace Corps volunteers go out and live in the village and live with the people for two years and learn the language. While they provide technical assistance they also build these really strong relationships with Samoans."

During that time, he formed a singing group with two American teachers, Karen Wess and Robert Fallon.

The three, known as the Samoan Fiafia Trio, were in tears when they were reunited in Samoa for the 50th anniversary celebrations this month.

He said back in the old days they sang different songs on the radio and gained a huge following of fans.

"Song about the culture and how important that the changes had to happen as it is natural that people change and cultures change and that we also need to hold on to the things that are good about it," he said.

"I didn't realize I was then prophesying my own future career in New Zealand as a Samoan lecturer."

The Office of the Regulator has approved the sale to a Fiji-government owned company, Amalgamated Telecom Holdings (A.T.H.). This was confirmed by the Regulator, Lefaoali'i Unutoa Auelua-Fonoti in response questions from the Sunday Samoan.

She said the approval was made in June 2017.

“Please be informed that my Office conveyed approval of transfer of control of the current Bluesky Samoa Limited to A.T.H. sometime in June this year,” she said.

“Subsequent to the review of their application with relevant information provided and sought in accordance with section 31 of the Telecommunications Act (“the Act”); with the view of promoting the objectives of the Act enshrined under section 3 of the same Act.”

The approval follows a submission made to the Office of the Regulator last September.

The Sunday Samoan understands that the “acquisition of BlueSky Group is for for $169Million.”

The approval has also been posted on A.T.H.’s website.

“Following the signing of the Sale and Purchase Agreement (S.P.A.) on 23, September 2016, it has received formal regulatory approval for change of control of BlueSky Samoa Limited from Amper SA to A.T.H.,” the website said.

It further noted, “Formal regulatory approvals and connects for American Samoa and Cook Islands are still in progress and A.T.H. is still waiting these approvals.”

SAMOA PM SAYS WITH QUALITY EDUCATION ANYTHING IS POSSIBLE

For this first time since Palemia Memoirs — co-authored by Prime Minister Tuilaepa Lupesoliai Sailele Malielegaoi — was launched in Apia last month, Tuilaepa has been coy in talking about his Memoirs and the message behind it until this week when he was forthcoming in sharing his personal views on his book believed to be the first in a series.

“Perhaps the most valuable message relayed in my travels (in Palemia Memoirs) is that anything is possible if you fortunate to have had a quality education.

“There is no reason why a young boy from kea-back, (rural villages) cannot become a Prime Minister.

“There is every reason for a young street vendor selling ulas and what not on the streets to support his family to become a Prime Minister, “says the Prime Minister remembering the year 1952 when he was living at Saluki.

“We were all street vendors back then including me.

“Electricity was scarce as most families relied on kerosene lamp.

“Times were hard but it helped shaped my character and cemented by resolve to succeed in whatever the Almighty chooses me to do.

“We did not have the luxuries that the generation of today is enjoying and I have no regrets,” he continued. “In my view, the most important message in Memoirs is for our young people, born in Samoa, and grew up in Samoa. Never give up.Whatever life throws at you take it, deal with it.

“There’s a saying that I use for self-motivation and encouragement.

“It’s better to give up trying than giving up altogether without trying at all.”

“I should hold a gold medal as the first Samoan to repeat Primer 1 four times back in the day.  Who would have thought that someone like me could overcome those challenges.

Politically, Palemia Memoirs is also a public record that Tuilaepa hopes for future Samoan politicians to use as a pathway.

The Prime Minister left for New Zealand this weekend to launch Palemia Memoirs in Wellington and Auckland next week.

Tuilaepa first won election to represent his Lepa district in 1980, after the death of the previous representative. He has been re-elected for Lepa since that time. He served as finance minister in the Tofilau government of 1991 and 1996. In 1996, he was appointed deputy prime minister. In 1998, Tofilau retired from parliament (and hence the prime ministership) due to ill-health. Tuilaepa then became the 6th Prime Minister of Samoa. He has successfully led his HRPP party to re-election in the 2001, 2006, 2011, and 2016 general elections.

EXCISE TAX ON ALCOHOL TO INCREASE IN SAMOA

Cited as one of the main contributing factors to the surge in violent crimes from murder to rape, and not to mention traffic fatalities and casualties, has forced the government’s hand to increase the excise tax on alcohol.

“That is an affirmative,” says Minister of Revenue also in charge of the Liquor Control Board, (LCB) Tialavea Fea Leniu Tionisio Hunt acknowledging the government’s support to the Samoa Law Reform Commission recommendation.

After extensive review which included public hearings to garner the viewpoints from stakeholders, the Commission has also recommended for the price of alcohol to be increased through excise tax.

“However, care should also be taken so that the increase does not render it unsustainable for businesses in the alcohol industry to operate,” continued the recommendation.

“The Commission also recommended for the excise tax on low volume alcohol to be reduced to encourage the production of low strength/volume alcohol.”

Tialavea agrees, noting that information received by the LCB indicates that certain local manufacturers of liquor are not playing by the rules by processing liquor over and above the legal alcohol content.

“The liquor bottle call Maso is one,” he added.

“Information has it that Maso vodka is selling at under $10 tala for a 7mil bottle.

“And the contents are extremely potent and can get four or five adults completely intoxicated.”

The Attorney General’s Office is presently drafting the Alcohol Control Bill 2017 for Cabinet approval before it’s tabled in Parliament.

It contains the new amendment to increase excise tax as recommended.