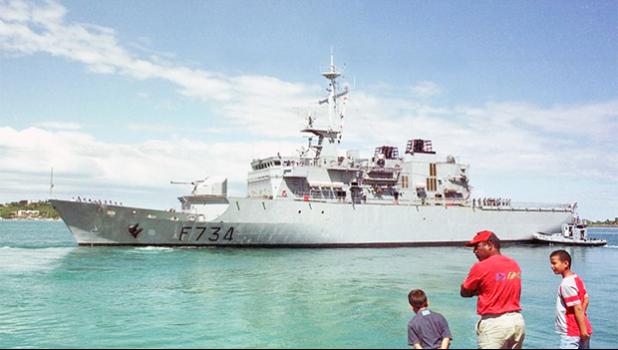 A yacht with 1.4 tons of cocaine has been intercepted by the French Navy off Tonga.

New Caledonia's newspaper said the operation was launched a week ago when a Navy vessel was sent out in a joint mission with police and customs officials.

The report of Les Nouvelles Caledoniennes gave no details of where the yacht was caught but it said it happened several days ago and four people were detained.

The Navy vessel, Le Vendémiaire, returned to its Noumea base on Tuesday, with dozens of masked military men guarding the off loading of the drugs which have been moved to an undisclosed destination for destruction.

The four detained people are to be presented to a prosecutor shortly.

The Samoa Observer reports that another foreigner has been accused of stealing from a local A.T.M. and has pleaded not guilty to 40 criminal charges.

Prosecuting the case is Vaisala Afoa of the Attorney General’s Office.

Information pertaining to the charges was not discussed in Court.

But the defendant, who is out on bail, sought for the Court’s approval to leave the country.

“He has a business in Vanuatu that he needs to attend to and that is the ground,” Leiataualesa said.

Judge Atoa-Saaga asked the lawyer to file an application.

Members of the Pacific Power Association opened their annual conference in Apia on Tuesday to discuss ways to drive down the cost of electricity in the region.

Pacific island countries have some of the highest electricity costs in the world, making power beyond the reach of many.

This is mainly due to high electricity tariffs, the high cost of service connections and the cost of wiring premises.

"Even with the recent advances in the adoption of renewable energy, the region still relies on imported oil to provide 76 percent of the region's generated electricity. Hence plans to increase the use and penetration of renewables whether it is through large scale solar projects or small community-based micro and mini hydro schemes, all work to move away from carbon-based economies."

Close to 250 delegates representing electricity utilities, Pacific island governments, development partners and the private sector are attending the conference being hosted for the second time by the Samoa Electric Power Corporation.

Jones will be reunited with his former assistants, Jeff Reinebold and Dennis McKnight, in Hamilton.

Although he will be coaching for the Tiger-Cats, he will also remain at his current job at St. Louis School in Honolulu where he accepted an administrative job last year.

In the Northern Marianas, efforts are underway to preserve the indigenous Chamorro and Carolinian languages by reviving a special commission focusing on the languages.

Last week, the Chamorro/Carolinian Language Policy Commission met with representatives of the Indigenous Affairs Office, Carolinian Affairs Office, and the Public School System to discuss their nominees for the body.

It has been almost seven years since the commission had members.

A language survey done in the community last year illustrated the urgency of the commission's work, as the languages are slowly dying.

Commission members must be able to translate English into written and spoken Chamorro or Carolinian.

The list of nominees will be finalized at the next meeting.

6 ARRESTED IN PROTESTS ATOP HALEAKALA

Two women and four men were arrested early Wednesday during a protest over construction of a new telescope atop Haleakala.

Hawaii News Now reports the six were among hundreds of activists blocking the road that leads to the summit, preventing a construction convoy from getting through.

Around 3 a.m., officers pushed people out of the way to allow the crews to pass and even carried out several people who were lying on the ground.

At least 200 people came out for the overnight protests over construction of the new Daniel K. Inouye Solar Telescope atop the mountain, which Native Hawaiians consider sacred. Some 60 officers responded, according to the state Department of Land and Natural Resources.

The protest comes as tensions are also high over the controversial Thirty Meter Telescope proposed for Mauna Kea.

Earlier this month, a former Circuit Court judge recommended the telescope project be allowed to move forward. The recommendation now goes to the state Land Board.