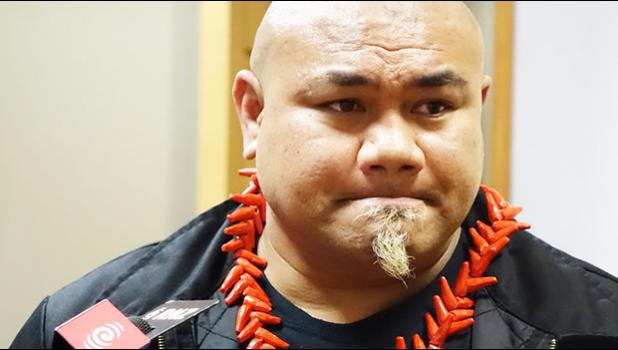 The Commissioner denied allegations when he took the stand in the Commission of Inquiry investigating the suspension of Assistant Commissioner Samoa Mulinu’u and former Police Inspector, Luatimu Samau.

The Commission was appointed by Cabinet. It is headed by retired Supreme Court Justice Lesatele Rapi Vaai, with Tavui Annie Laumea and Namulau’ulu Sami Leota as members.

The Commission is looking into the conduct of Samoa Mulinuu in handling the criminal matter against Sililoto Peneueta and his involvement in alleged tampering with witnesses in the District Court case of Police v Mauga Precious Chang.

While on the stand, Samau questioned the Commissioner if he remembered walking around with a pistol without authorization.

But Fuiava strongly denied this.

“That is absolutely false,” the Police Commissioner said.

Samau put it to Fuiavaili’ili that on 8 July 2015, the Commissioner was issued a “clot pistol” from the Army.

“I’m pleased that the Armed Services Committee included Mr. Evans and my bill in the NDAA. Small businesses provide the essential industrial base that is needed for our nation’s defense. These reforms to the Small Business Development Centers will ensure that entrepreneurs are receiving the help they need.” stated Amata.

The NDAA is the federal law specifies the budget and expenditures of the Department of Defense.  It authorizes the agencies responsible for defense, established funding levels, and sets the policies under which money will be spent.

Discovering one in three Pasifika women in New Zealand is abused or violated was part of the motivation for a forum in Porirua this weekend.

The event, 'The Gathering of the 3000' will focus on Pasifika men and the issues they face, and hopes to tackle what's seen as the over-representation of Pacific people in the country's negative statistics.

Organizer Fa'alogo Talosaga Va'ai said abuse of women and concerns for his own family meant he had to do something.

"I'm a grandfather and I've got four grandchildren. Three of them are girls. If we put that statistic together, that means one of my three girls is going to be abused or violated."

The event opens this evening with an address from New Zealand's prime minister Bill English.

Tim Nanai Williams is back among three changes to the Manu Samoa starting line-up for Saturday's Pacific Nations Cup opener against Tonga in Nuku'alofa.

In the only change to the backline, the Chiefs utility replaces D'Angelo Leuila at fullback after missing last week's 19-17 defeat by Wales in Apia through injury.

Head coach Namulauulu Alama Ieremia has also had to make some enforced changes in the front row, with Piacenza prop Nephi Leatigaga earning his first test start in place of the injured Viliamu Afatia, while veteran Census Johnston remains unavailable.

"It is not ideal losing your two key props leading in to one of your biggest test matches for 2017, however this does open the door for Nephi Leatigaga to start at loosehead prop with two new call ups to the squad in Bay of Plenty brothers Jordan and James Lay, who were both born in Samoa," said Namulauulu.

Manu Samoa prevailed 30-10 when the Pacific rivals met in Apia last year and a win would be enough to seal automatic qualification for the 2019 Rugby World Cup in Japan.

But Namulauulu said the visitors were braced for a difficult match, in what will be the first test hosted in Tonga at Teufaiva Stadium since 2009.

"We are looking forward to playing a strong Tongan team named, we all know the significance of this match," he said.

"It is not lost on us that we have not played here since 2008 and this was actually the last time a test match was last played in Tonga, so as you can imagine it will be a big occasion for Tonga and the community here".

ONE PACIFIC AND MĀORI PARTY STILL DECIDING ON CANDIDATES

The One Pacific group and the Māori Party are still deciding who will stand in what seats in this year's New Zealand election.

One Pacific wants to improve political representation for Pacific people and this week signed a deal for Pacific candidates to stand for the Māori Party.

Up to nine candidates of Pacific ethnicity will stand in general seats, mainly in Pasifika-strong Auckland electorates such as Manukau East, Mangere, Maugakiekie and Mt Roskill.

One Pacific co-leader Ai'iloilo Dr Elise Puni said there had always been a lot of goodwill between Māori and Pacific peoples.