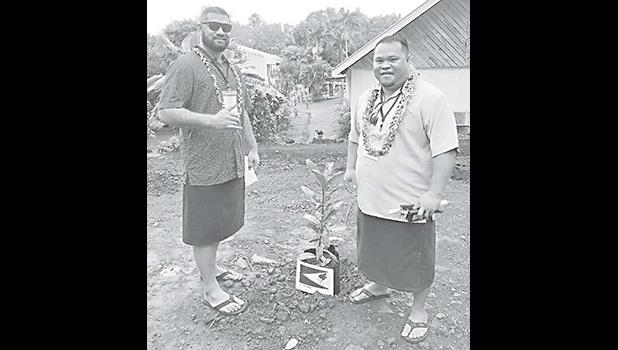 The PCCC is a partnership between the Government of Japan and the Government of Samoa, and is hosted by SPREP. As the regional Centre of Excellence, it will be a hub for climate change information, research, and innovation. The PCCC will provide practical tools, knowledge, support and training to address the adaptation and mitigation priorities of Pacific island people.

Present at the event were the Prime Minister and Deputy Prime Minister of Samoa, Pacific island ministers, high level representatives, government officials and heads of delegations to the 29th SPREP meeting.

Hon. Tuilaepa Lupesoli’ai Sailele Malielegaoi, Prime Minister of Samoa, thanked the Government of Japan for their support of not only Samoa, but of the Pacific region through the establishment of the PCCC. With Pacific islands at the forefront of the climate change impacts, the Prime Minister noted the strong urgency for action to combat climate change and increase the resilience of our Pacific people and communities.

“Our Blue Pacific region has declared climate change as the single greatest threat to the livelihoods, security and well-being of the people of the Pacific. Our limited resources and the lack of adaptive capacity makes the burden of rehabilitation a very difficult undertaking. This is why today, witnessing the opening of the Pacific Climate Change Centre, is of great significance to our ongoing efforts as a region to fight against the impacts of climate change,” said Hon. Prime Minister Tuilaepa.

The journey of the PCCC began ten years ago, when climate change practitioners from around the region tabled the idea of a Pacific Centre on climate change during the Pacific Climate Change Roundtable in Majuro, Republic of the Marshall Islands.

HE Maugaoleatuolo Shinya Aoki, Extraordinary and Plenipotentiary Ambassador of Japan to Samoa, acknowledged the role of Samoa under the strong leadership of Prime Minister Tuilaepa in securing the Centre of Excellence as an institution to benefit not only the Samoan people, but all Pacific people.

“I commend the Prime Minister of Samoa, and the Pacific leaders, on their strong political leadership to advance climate change action, their commitment to champion priority initiatives to drive and deepen regional cooperation, collaboration and integration,” said Ambassador Shinya Aoki. “Japan remains committed to climate change action in the Pacific and will continue to take steps to combat climate change and fully honor its obligations through implementing various projects, and utilising technologies and experience in the area of climate change.”

The Ambassador also thanked the Government of New Zealand, which was represented by the Honourable Minister of Pacific Peoples, Aupito William Sio, for their financial support of the PCCC.

New Zealand’s contribution towards the PCCC will fund key staff positions, including the manager of the PCCC, a readiness adviser who will assist SPREP member countries to access climate change finance, and technical advisers to coordinate knowledge management and apply science to address challenges.

“The opening of this centre is an important milestone in enhancing regional coordination on climate change issues. We in NZ are only too pleased to support this project in cooperation with the Governments of Samoa, Japan and SPREP,” said Hon Minister Aupito William Sio.

“Our intention in funding these positions is to support the centre to meet its important objectives of knowledge brokerage, support for applied research and capacity building, and supporting innovation.”

Hon. Aupito William Sio congratulated Samoa, Japan and the region on the competition and establishment of the centre, and acknowledged the strong leadership shown by SPREP in supporting the Pacific and its SPREP Members in successfully completing the centre.

The Government of Japan’s support does not conclude with the completion of construction of the PCCC, but they will also provide a programme of technical advisory training on adaptation and mitigation.

In closing the formalities of the opening ceremony, Mr Kosi Latu, director general of SPREP, thanked Hon. Prime Minister Tuilaepa, HE Ambassador Aoki, and Hon. Minister Sio and their respective governments for their leadership, support and assistance of the Pacific region in its efforts to mitigate and adapt to the impacts of climate change.

“The centre is a shared regional resource for all our members where we can collaborate and work together. Built through regional cooperation, it will allow for open and inclusive regional exchange and mutual learning which will benefit all the people of the pacific,” said Mr Latu.

“The idea of a climate change centre came from within the Pacific region itself – it came from you, the members of our region. How forward thinking it was ten years ago, the idea of a centre to help us coordinate better as a region, to share climate change information, traditional knowledge and solutions to help one another address the single greatest threat to our resilience and our development, and to the survival of our communities.”

The building itself was constructed according to green guidelines which includes 50% of the energy to be driven by solar panels, and has energy and water saving technologies installed. It is a showcase of sustainable building technology in the Pacific, and it is hoped that the centre will run 100% on renewable energy in the future.

The 29th SPREP meeting of officials was held at the Tanoa Tusitala Hotel in Apia, Samoa from 3-6 September. The meeting brought together SPREP’s 21 Pacific island members countries and five metropolitan members to discuss strategic issues pertaining to the organisation, and to approve the 2020-2021 work plan. The Environment Ministers’ High-Level Talanoa will be held on Friday, 6 September.

The five metropolitan members of SPREP are: Australia, France, New Zealand, United Kingdom and the United States of America.