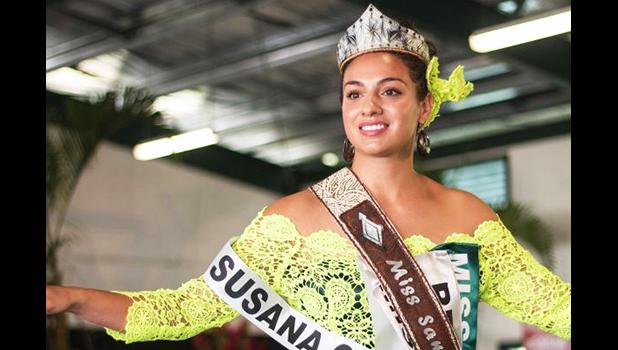 Apia, SAMOA — Miss Samoa Sonia Piva has begun preparations for the 2018 Miss Pacific Islands Pageant which is scheduled for November 23 in Tonga.

The reigning Miss Samoa leaves Samoa for Tonga three days before the regional pageant, which will see her coming up against peers from throughout the Pacific.

Sonia said the pageant will be held over three days and each day will feature a different category for the contestants.

“We have the pre-pageant interviews which start it off, and there will be categories of sarong, stage interview, talent and the traditional wear.

“It is quite exciting and a great first time experience which I am looking forward for in Tonga as I have not been there before,” said.

Sonia said her preparations are going well and it will get busier for her closer to the event.

“But it’s what comes with the pageant and definitely what we signed up for so we are just hanging in there, it will be all worth it in the end.

“The only challenges I face are just trying to get over the nerves. And then a matter of getting mentally ready as well as physically ready which is the biggest challenge I have at the moment but it’s coming along well.

But the favourite part of her preparations to the regional pageant is representing Samoa in front of many people.

“I believe that the essence of a Tamaitai Samoa (Samoan lady) is someone who can carry themselves gracefully, definitely a good role model and also someone committed in helping the people of our community.

“Samoa’s culture and its people make us unique from the rest of the world. Our culture is our identity which identifies and distinguishes us from other people; it is with this distinctive culture that I am so proud to represent to the rest of the world especially the pacific,” she added.