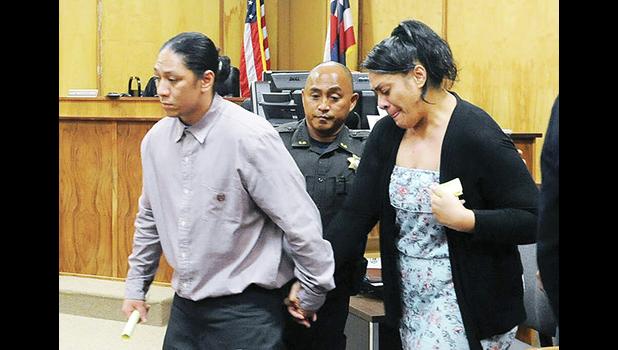 Kealakekua, HAWAII — The jury returned its verdict Tuesday in the trial against Wesley Samoa, Natisha Tautalatasi and Lama Lauvao, who were each charged with attempted murder in the Sept. 17, 2018, beating of hotel security guard John Kanui.

The nine-woman, three-man jury found Samoa and Tautalatasi guilty of attempted second-degree murder. They face life in prison with the possibility of parole.

Lauvao was convicted of the lesser charge of first-degree assault and faces up to 10 years in prison.

The verdict came after the jury repeatedly viewed the 25-minute video surveillance of the Kona Seaside Hotel security guard being beaten by the defendants until he laid motionless on the ground. After a break for one minute, Tautalatasi resumed kicking and punching the victim.

The prosecution presented witnesses from the police department, hotel employees, physicians and a family member.

Tautalatasi and Lauvao testified earlier on their own behalf and were the only defense witnesses.

Tautalatasi started weeping as the verdict was read. Samoa and Lauvao remained stoic.

After their fates were decided and the jury dismissed, Samoa apologized to the Kanui ohana seated in the gallery as he was escorted out of the courtroom. Lauvao also addressed the security guard’s family, asking for forgiveness.

Kanui remains a quadriplegic in a long-term care facility on the mainland.

Families of the defendants and Kanui met outside the courtroom after the verdict was handed down. Hugs were exchanged.

“Say a prayer for all sides,” said a member of the Kanui ohana.